The Lady of All Nations case, Bishop Punt reconstructs the facts

A private letter (given to a journalist) signed by the Apostolic Nuncio in Lebanon quotes a document from 1974 from the Congregation for the Doctrine of the Faith, which, it maintains, now makes inappropriate to venerate Mary as “The Lady of All Nations”. Obvious bewilderment among those devoted to her. But the Bishop emeritus of Amsterdam, J. M. Punt, who approved the apparitions in 2002, reconstructs the principal parts of the story and demonstrates that during the 1980s and 90s Rome had already given permission for the title and its public veneration. Will the CDF intervene again to clarify the question? 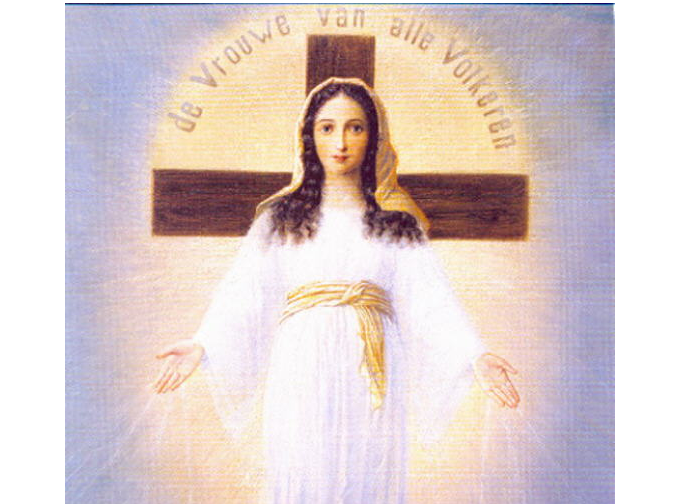 A small bomb has been dropped on the veneration of Mary as “The Lady of All Nations,” the title which originates from the apparitions in Amsterdam to Ida Peerdeman between March 25, 1945, and May 31, 1959. The messages emphasise the urgent need for humanity to return to fixing its gaze on the Cross, and the Blessed Mother asks for the definition of a fifth Marian dogma defining her as “Coredemptrix, Mediatrix, and Advocate.” On May 31, 2002, the then-bishop of Haarlem, Joseph Marianus Punt, recognised the supernatural character of the apparitions.

But let’s turn our focus to the bomb mentioned above. On August 28 the journalist David Murgia published a private letter on his blog, received from Vatican sources (as he himself explained to us in a phone conversation). The letter, dated July 20, 2020, is signed by the Apostolic Nuncio in Lebanon, Joseph Spiteri, and is directed to the Maronite Patriarch of Antioch, Béchara Boutros Raï, in response to a request for clarification about the official position of the Church on the devotion to “Our Lady of All Nations.”

The nuncio says that he is writing after having asked for clarification from the Congregation for the Doctrine of the Faith. And he adds that the CDF has pointed out to him that the Notification of May 25, 1974 is still valid. Archbishop Spiteri then reports some excerpts from the Notification, including the judgment that “it did not consist of a supernatural nature”; and the invitation to the faithful “to cease any propaganda about the supposed apparitions and revelations of ‘The Lady of All Nations.’”

After quoting the 1974 document, Archbishop Spiteri adds that the CDF believes “that it is not appropriate to contribute to the spread of the veneration of Mary as 'The Lady of All Nations.'”

The letter of Nuncio Spiteri is problematic, because it does not take account of the changes that have occurred since 1974. Its publication and some summary news reports that have followed it have caused confusion among the faithful.

In light of this, the Diocese of Haarlem-Amsterdam has published a statement by Bishop Johannes W. Maria Hendriks (September 17). After a brief summary of the story, Bishop Hendriks refers to the more complete account made by his predecessor Bishop Punt published on September 15. We therefore refer here to the latter.

Bishop Punt explains that he “knew the visionary very well,” emphasising she was well-balanced. In 1956 Bishop Johannes Huibers “was the first to permit private veneration of both the title and the image with the prayer of Our Lady of All Nations, but he prohibited public veneration.” The apparitions, moreover, were at that time still taking place, and Huibers relied on the advice of a diocesan commission, “which could not yet establish a supernatural origin.” In short, it was the famous “wait and see” judgment of non constat de supernaturalitate [not determined to be supernatural – a neutral judgment], and the approval given to private veneration tells us that it certainly could not have been a definitive negative judgment. The following year, Rome approved Bishop Huibers’ approach, leaving the door open to further developments. In 1967, Huiber’s successor Theodorus Zwartkruis strove to get the case re-opened, but in 1974 the CDF confirmed the validity of Huibers’ non constat as well as his ban on public veneration.

Meanwhile, in Japan, a heavenly “unforeseen thing” happened: the apparitions of Our Lady of Akita in 1973. What did they have to do with Amsterdam? As Bishop Punt recalls, some of the religious sisters in Akita who were dedicated to adoration of the Blessed Sacrament had commissioned “a wooden statue made in the image of The Lady of All Nations, before which they began to recite daily the prayer from Amsterdam.” The statue of Our Lady of Akita [see the photo comparing it with the image from Amsterdam] shed blood, tears and exuded perfumed oil. Hundreds of people were eyewitnesses of these phenomena, which were the object of accurate scientific investigations. On April 22, 1984, the local bishop John Shojiro Ito recognised the supernatural nature of the events. 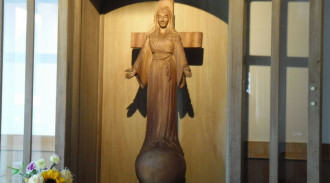 In 1984, Bishop Punt writes, “Rome modified its position on the question of Amsterdam.” The CDF advised then-bishop Henricus Bomers “to consider making a distinction between the title and the apparitions” and the Congregation said that it was inclined to recognise the title. The dialogue continued in the following years.

In the meantime, on February 28, 1989, the same Japanese Bishop Ito sent a letter to the Dutch Bishop Bomers (see here) to inform him of the story of the origin of the statue in Akita, as well as of the fact that, on the day of the first apparition to Sister Agnes Sasagawa in Akita, an angel prayed the prayer of “The Lady of All Nations” with her.

Another positive development occurred in 1995, when “Rome permitted public veneration.” In that same year Bishop Punt met Cardinal Joseph Ratzinger, Prefect of the CDF, who confirmed him in his intentions. And on May 31, 1996, “Bishop Bomers, together with me as auxiliary bishop, therefore issued a decree in which we permitted the public veneration of ‘The Lady of All Nations,’ leaving the question of authenticity to the conscience of the faithful,” pending further developments.

The rapid growth of the devotion and the requests from many bishops and the faithful for clarification (also in light of the approval of the apparitions at Akita) finally led Punt – who had become Bishop of Haarlem – to order a new study by theologians and psychologists. Their judgment was “favourable.” And thus in 2002 Bishop Punt issued a written declaration – aware of the role of the Holy See but also that “it is primarily the task of the local bishop to pronounce judgment” (in lines with the Norms of the CDF) – concluding that “there is a supernatural origin in the apparitions of Amsterdam.”

In 2005, “Rome required a small change in the prayer” dictated by the Blessed Mother. Thus the change was made from the much-discussed line “who once was Mary” to the present “the Blessed Virgin Mary” (see here). In order to avoid misunderstandings, Bishop Punt accepted the correction of the original formula in obedience – which was approved in 2006, again in agreement with Rome. The formula also has an explanation, recalled by the prelate in the synthesis he gave on September 15. The bishop emeritus recalls the fact that Pope Francis also sent a message of greeting and blessing for the world day of prayer in honour of The Lady of All Nations, which took place in Düsseldorf on September 14, 2019.

Ultimately, with respect to the 1974 Notification, there are at least three changes that have occurred thanks to the dialogue between Amsterdam and Rome, which are substantiated in three permissions from the Holy See for: a) the title of “Lady of All Nations;” b) public veneration; c) the recitation of the prayer (with the aforesaid modification).

It should be noted that the approval of the latter came after the Bishop of Haarlem had approved the apparitions.

On Saturday, October 10, The Compass sent an email containing three questions to the CDF, asking for clarification on this matter.

On 30 December 2020, the Bishop of Haarlem-Amsterdam, Johannes Hendriks, published a note of clarification (see here) in agreement with the Congregation for the Doctrine of the Faith. The note explains that «the Congregation for the Doctrine of the Faith reaffirms the validity of the negative judg­ment [non constat de supernaturalitate, ed.] on the supernaturality of the alleged “apparitions and revelations” to Ms. Ida Peerdeman approved by St. Paul VI on 04/05/1974 and published on 05/25/1974. This judg­ment implies that everybody is urged to cease any propagation concer­ning the alleged apparitions and revelations of the Lady of All Nations. Therefore, the use of the images and prayer cannot in any way be consi­dered a recognition - not even implicitly - of the supernaturality of the events in question».

Furthermore, «the use of the title Lady of All Nations for Mary is in itself theologically acceptable», but «cannot be understood - not even implicitly - as the recognition of the supernaturality» of the apparitions in Amsterdam.

Therefore, the CDF does not recognize the supernatural nature of the apparitions, but permits the public veneration of Mary as the Lady of All Nations.

In the pastoral explanation (see here) published by monsignor Hendriks it is made clear that «It is permitted to use the image and the prayer - always in the way the Congregation for the Doctrine of the Faith approved in 2005».