The image of the Divine Mercy will relive in new paintings

Eleven Polish painters have been invited to paint images of the Merciful Jesus as part of the project “Paint Catholicism anew”. It is not about making copies of Kazimirowski and Hyla's paintings stress the organisers. The artists, by following the indications Saint Faustina wrote in her Diary, albeit with their own individual sensibility, are required to create new paintings for worship. 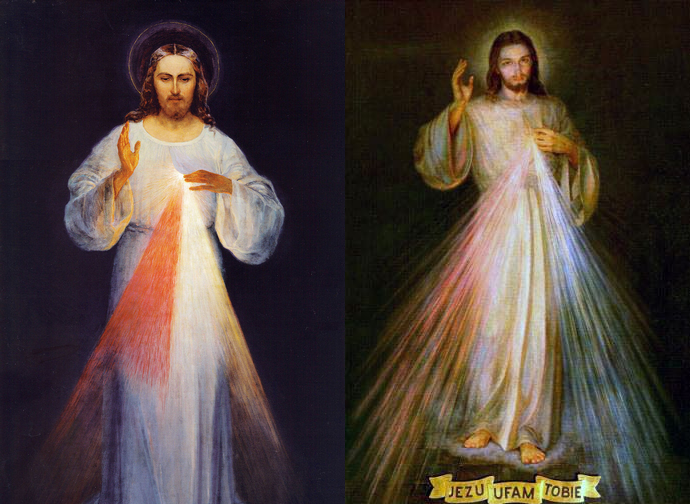 In the twentieth century the cult of the Divine Mercy developed around devotion to the image of Merciful Jesus which Sister Faustina Kowalska was told to have painted. As the Polish mystic writes in her diary called Divine Mercy in My Soul, Jesus himself asked her to have the image created with the following words: "Paint an image according to the pattern you see, with the words below: ‘Jesus I trust in You!’. I want this image to be venerated first in your chapel, and then throughout the world. I promise that the soul that will venerate this image will not perish. I also promise victory over [its] enemies already here on earth, especially at the hour of death. I Myself will defend [that soul] as My own glory."

The first work of art (top left) was painted by the Polish artist Eugeniusz Kazimirowski. Sister Faustina and Father Sopocko her confessor and spiritual father, followed its creation very closely. It took the painter approximately six months to complete it. Subsequently the inscription “Jezu Ufam Tobie” (Jesus, I trust in you) was inserted. This first painting was hung in the church of St. Michael in Vilnius, where Father Sopocko was parish priest. Today the original is on display in the Vilnius sanctuary, founded specially in 2004.

Whereas, the image of the Divine Mercy which was to become even more famous is that painted by Adolf Hyla (top right), an artist from Krakow. The artist had approached the superior of the Congregation of Our Lady of Mercy in Krakow with the proposal to create a painting for the chapel of the nuns’ convent as an ex voto for having been saved from the misfortunes of World War II. Mother Irena Krzyżanowska, then superior of the house accepted and asked Hyla to paint the picture according to Sister Faustina's instructions. The artist received a copy of the description of the painting from Sister Faustina's Diary and a small copy of Kazimirowski's painting: this second image was completed in the autumn of 1943. The painting is located in the chapel of the Sisters in Krakow-Łagiewniki.

The two paintings are well known throughout the world but it is worth noting that the image of Merciful Jesus is to be painted again! This extremely difficult challenge is being faced by 11 Polish painters who have been invited to partake of the project called "Paint Catholicism anew", organised by two institutions: the Institute of Culture of St. John Paul II of the Pontifical Angelicum University of Rome and the St. Nicola, based in Poland. The organisers of the event stress that it is not a question of making copies of the existing and well-known paintings, but of painting works of great artistic value using the language of contemporary painting. These images, although an emanation of individual artistic sensibility, must be made - most importantly - according to the indications written by Sister Faustina in her Diary, so that they can serve for the purposes of worship, that is, exhibited in churches.

Two meetings were organised to help the artists with this difficult challenge, during which Monsignor Jacek Grzybowski (auxiliary bishop of Warsaw-Prague), Dr. Dorota Lekka and Dr. Izabela Rutkowska explained the theme of Divine Mercy from different points of view. The theological aspect was presented through the documents of the Church and the magisterium of the Popes on art, but primarily by recalling the phrases Sister Faustina recorded in her Diary related to the picture of Christ. Images of "Merciful Jesus" were also shown. Moreover, the organisers supported the artists by organising a trip to Vilnius to see Kazimirowski's painting, the only image of Merciful Jesus seen on earth by Sister Faustina. "We hope that it will be possible to promote an encounter between art and religion, the Church and artists. This is to ensure the continuity of the Gospel message also through the promotion of works of art. Beautiful, wise and profound works, which with their artistic vision will show the great works of God. It is particularly important for us that they depict and transmit to everyone the important message of Divine Mercy”, said Msgr. Grzybowski during the meeting with the painters.

The artists have pledged their paintings will be ready by the end of January 2022. Subsequently, they will be presented to the public in a series of exhibitions. The initiative aims to revive sacred painting and is intended to be only the first stage in a series of ventures planned for the future. In the next few years, the Institute of Culture of St. John Paul II and the San Nicola Foundation intend to invite artists to tackle new themes fundamental to the Christian faith. 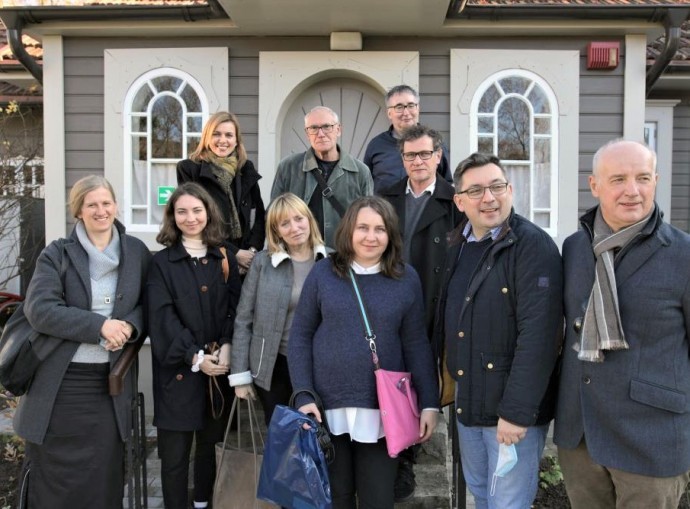