The Epiphany is the feast of God's challenge.

The "mission" is the proper name of the Church, and in a certain sense defines her. The Church becomes herself when she carries out her mission. The Church is herself, when men—such as the shepherds and the Magi Kings from the East—reach Jesus Christ by means of faith. Saint John Paul II's homily on 6 January 1979. 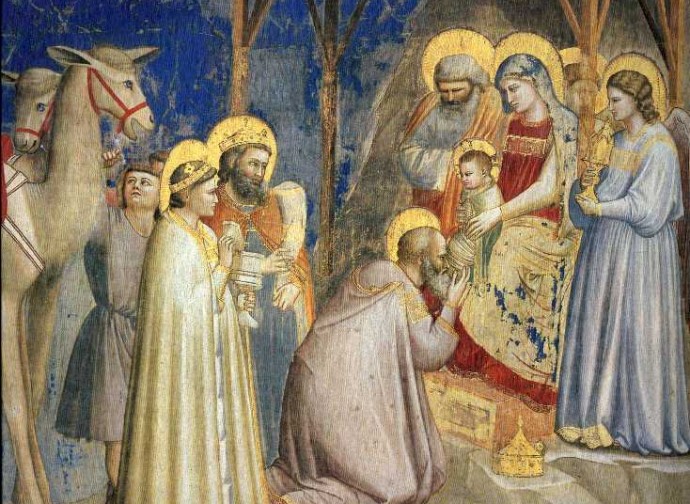 "Arise (Jerusalem), for your light has come, and the glory of the Lord has risen upon you", the Prophet Isaiah cries out (60:1), in the eighth century before Christ, and we listen to his words today in the 20th century A.D. and admire, really admire, the great light that comes from these words. Through the centuries, Isaiah addresses Jerusalem, which was to become the city of the Great Anointed, of the Messiah: "And nations shall come to your light, and kings to the brightness of your rising... your sons shall come from far, and your daughters shall be carried in the arms... A multitude of camels shall cover you, the young camels of Midian and Ephah; all those from Sheba shall come. They shall bring gold and frankincense, and shall proclaim the praise of the Lord" (60:3-4; 6).

We have before our eyes these three—so tradition says—three Magi Kings who come on pilgrimage from afar with camels and bring with them not only gold and incense, but also myrrh: the symbolic gifts with which they went to meet the Messiah who was awaited also beyond the frontiers of Israel. We are not surprised, therefore, when Isaiah, in his prophetic dialogue with Jerusalem, carried out through the centuries, says at a certain point: "your heart shall thrill and rejoice" (60:5). He speaks to the city as if it were a living man.

"Your heart shall thrill and rejoice". On Christmas Eve, finding myself together with those participating in the eucharistic liturgy at midnight here in this Basilica, I asked everyone to be, in mind and heart, more there than here; more in Bethlehem, at the birthplace of Christ, in that stable-cave in which "the Word became flesh" (Jn 1:14). And today I ask the same of you. Because the Magi Kings, those strange pilgrims from the East, came just there, to that place, south of Jerusalem. They passed through Jerusalem. They were led by a mysterious star, the star, an exterior light that moved in the firmament. But they were led even more by faith, the inner light. They were not surprised by what they found: neither by the poverty, nor the stable, nor the fact that the Child lay in a manger. They arrived and they fell down "and worshipped him". Then they opened their caskets and offered the Child Jesus gold and incense, of which Isaiah speaks, but also myrrh. And after having done all that, they returned to their country.

Because of this pilgrimage to Bethlehem, the Magi Kings from the East became the beginning and the symbol of all those who, through faith, reach Jesus, the Child wrapped in swaddling clothes and laid in a manger, the Saviour nailed to the cross, he who was crucified under Pontius Pilate, taken down from the cross and buried in a tomb at the foot of Calvary, rose again on the third day. These very men, the Magi Kings, three according to tradition, from the East, became the beginning and the prefiguration of all those who, from beyond the frontiers of the Chosen People of the Old Covenant, have reached and still reach Christ by means of faith.

"Your heart shall thrill and rejoice", Isaiah says to Jerusalem. In fact the heart of the People of God had to dilate in order to contain the new men, the new peoples. This very cry of the Prophet is the keyword of the Epiphany. It was necessary to dilate the heart of the Church continually, when more and more new men entered it; when, following in the steps of the shepherds and the Magi Kings, from the East new peoples kept arriving in Bethlehem. Now, too, it is always necessary to dilate this heart according to the needs of men and peoples, ages and times.

The Epiphany is the feast of the vitality of the Church. The Church lives her awareness of God's mission, which is carried out through her. The Second Vatican Council helped us to realize that the "mission" is the proper name of the Church, and in a certain sense defines her. The Church becomes herself when she carries out her mission. The Church is herself, when men—such as the shepherds and the Magi Kings from the East—reach Jesus Christ by means of faith. When in the Christ-Man and through Christ they find God again.

The Epiphany, therefore, is the great feast of faith. Both those who have already arrived at faith, and those who are on the way to arrive at it, take part in this feast. They take part, rendering thanks for the gift of faith, just as the Magi Kings, full of gratitude, knelt before the Child. The Church, which becomes more aware of the vastness of her mission every year, takes part in this feast. To how many men it is still necessary to bring faith! How many men must be won back to the faith, which they have lost, and that is sometimes more difficult than the first conversion to faith! But the Church, aware of that great gift, the gift of the incarnation of God, can never stop, can never tire. She must continually seek access to Bethlehem for every man and for every period. The Epiphany is the feast of God's challenge.