The enemy of Chinese Catholics is in Rome

Cardinal Zen, Hong Kong’s emeritus bishop, blasts a recent speech by the Vatican’s Secretary of State, Cardinal Pietro Parolin. In a personal blog post, Zen urges the truth be told about the Catholic Church in China, which concerns all Catholics around the world. 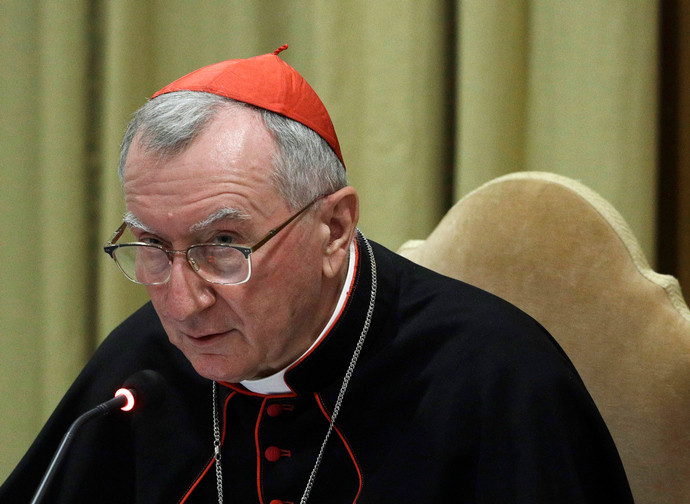 For Cardinal Joseph Zen, bishop emeritus of Hong Kong, it is undeniable that the greatest responsibility for the notorious agreement between China and the Holy See lies with the Vatican’s Secretary of State, Cardinal Pietro Parolin.

The historic accord will be renewed any day now, unless the Chinese government backs out. This is what is clear from wide-ranging criticism Cardinal Zen posted on his blog when picking apart a speech Cardinal Parolin made last October 3 at a conference on China in Milan. Zen defines that speech as “sickening” for the falsehoods that were told in order to justify the Vatican-China agreement.

It would be impossible to dwell on every issue taken up by Cardinal Zen. However, we can mention two which deserve special attention and indicate the very serious consequences the agreement has now and will continue to have for Church in China and for the entire Roman Catholic Church.

The first issue concerns the seven excommunicated bishops who, thanks to the agreement which went into effect exactly two years ago, were “legitimized”, that is, officially reinstated by Rome. This is the agreement’s main victory, as boasted by the Holy See, while supposedly helping to heal a schismatic situation. But the problem is that, unlike in the past, when other Chinese Communist Party episcopal appointees were readmitted to communion with Rome, not one of the reinstated bishops asked for or showed any desire to be in communion with the pope. Their legitimization was only a victory for the independent Patriotic Association, that is, the Chinese Catholic Church which directly takes its cues from and is officially linked to the Chinese Communist Party, whose main objective is the "sinicization” of Roman Catholicism.

Cardinal Zen writes:
“If… the seven legitimated excommunicates are the sample of what is to come, may the Lord free us. Did they change their conduct? Have they shown any sign of repentance? Gratitude for the forgiveness granted by the Pope? Public promise to respect Church doctrine and discipline? Instead, what you see is that they go around singing triumph: we made the smart choice by staying with the government!”

“Particularly disgusting was the treatment of the two legitimate bishops who were forced to give way to the excommunicated. Huang Bingzhang, the now legitimated bishop of Shantou, after his ‘victory’ organized a large celebration with the deposed bishop Zhuang Jianjian in Zhuang’s church. His clergy and many faithful came numerous by coaches, but the clergy and faithful of the deposed were not admitted (the police kept order). They wanted the deposed to come to concelebrate and thus humiliate him. But the elderly bishop still has a clear mind, he said: ‘When you get married, you celebrate. But I was forced to divorce my diocese, what is there to celebrate?’ and withdrew.”
“Bishop Guo Xijin of Mindong, who leads the non-official community with many more members than that of his contender, obeyed the Vatican by giving up his position to the excommunicated one and becoming his auxiliary. But everyone has seen how they made his life impossible, so all he could do is to resign.”

“Is the Church in China finally united? Rapprochement between the two Church communities? The normalization of the Church life, just because the Pope gives his blessing to this miserable situation, to this victory of the enemy? Is that good to have all bishops legitimate but in a Church that is objectively schismatic? Is it progress? What kind of journey is it beginning?”

Naturally, these are all rhetorical questions. The agreement – even when only considering  bishops' nominations –  "was simply disastrous," Zen concludes.

Then there is a second issue which is positively disturbing: the lies the Holy See tells (while supported by a "friendly", pro-Chinese press) to justify what it believes is good about its agreement with China. As such, it is not a simply matter of having two different visions, but about veritable fabrications. Cardinal Parolin's speech, indeed, contains some of these: linking Communist excommunications (by Pius XII) to the beginning of the Chinese government’s anti-Christian persecutions and expulsion of Catholic missionaries; the presumed continuity of previous papal policy towards China; and Benedict XVI’s presumed consent to the agreement.
It is true that diplomacy has its own modus operandi, but such brazen and repeated mendacities go far beyond diplomatic requirements.

They are made up knowing full well that most Catholic faithful have very little knowledge of Chinese affairs and, thus, no means of exposing them. This renders such deceit all the more serious.

What confidence can we have in these bishops? What esteem is possible for pastors who abandon their flock to wolves, who leave Chinese Catholics alone when faced with the dilemma of whether to betray their Church or head underground to the catacombs?

This is a question that concerns the whole Church, because the lies are not merely directed toward Chinese Catholics. Far worse is the Vatican’s "Chinese policy". It is an insult to all Chinese martyrs, because it rewards those who give in to the Communist regime’s sweet talking the Catholic Church. It is an affront to all Catholics who, in remaining faithful to the Gospel, will not compromise with the secular powers that be and, thus, refuse to pay tribute to any form of emperor worship. On the contrary, it is an open invitation to dilute and even deny the Gospel in exchange for a comfortable life of peace and tranquility.