“The devil wants to destroy Mariupol, the city of Our Lady.”

“They are bombing primarily Mariupol with diabolical force, because it is a Marian city and the devil is trying to destroy it.” One of the two Pauline Fathers, now displaced, told Vatican Radio: “Our escape was miraculous. But we will return to rebuild.” 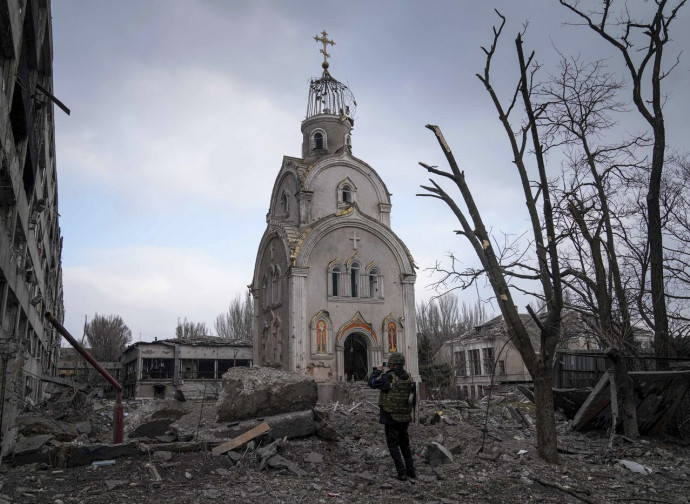 Last week, Fr. Marek Kowalski published a dramatic appeal on social media. The Pauline Polish monk asked for prayers for the community of brothers in the city of Mariupol in Ukraine: “Mariupol is surrounded, we are in urgent need of prayers (…) They want to starve all the inhabitants to death (…) I beg you, send this message to anyone who can help with prayer and fasting to stop Satan.” The message concluded with an appeal to “pray together to God for this miracle.”

The order of Saint Paul the First Hermit, for centuries has been the custodian of the shrine of the Black Madonna of Częstochowa and of many other Marian shrines throughout the world. When the opportunity arose, the Polish Paulines also began to found communities and churches in Ukraine, first and foremost in the city of Our Lady, Mariupol, bringing with them a copy of the icon of the Black Madonna, venerated in the monastery of Jasna Gora. No-one could have foreseen that would one day this city would bear the brunt of the devastating Russian invasion of Ukraine. The city has been surrounded by Russian soldiers who have prevented any contact with the outside world. They have also obstructed efforts to open humanitarian corridors to evacuate the besieged population. It was only after all their parishioners had fled Mariupol, that the Polish fathers quite miraculously, also escaped the besieged city.

The Vatican Radio journalist, Beata Zajączkowska, managed to reach two of the Mariupol fathers, who are currently in the eastern part of the country. According to the monks, the Russians are conducting a barbarous bombardment of Mariupol because “they want to wipe the city of Our Lady off the face of the earth”. “What the Russians have done and what they continue to do in Mariupol, cries out to heaven for vengeance. They have bombed water, electric and heating systems. They deliberately target these places to cause the most harm to those who remain in the city.  They have bombed homes with every means at their disposal: airplanes and artillery. The bombardment has been incessant, interrupted by a pause of only a few minutes. They bomb primarily Mariupol with diabolical force, because it is a Marian city and the devil is trying to destroy it (…) The Russians have tried everything to break Mariupol’s spirit of defense and to force the city to surrender. This explains why they bombed a children’s hospital and why they have dropped another bomb, weighing about one ton, in the city center” – says Fr. Pawel Tkaczyk, who also explained why the people continue to resist, despite everything: “When the Russians finally enter the city, the purges will begin; in other words, they will kill all those who oppose them. This is why the city continues to resist”.

The Polish fathers also depicted the terrible tragedy of those who cannot leave their homes, who cannot buy anything, and who cannot  lead a normal life, because their own lives are constantly under threat. “When there was a brief pause in the shelling, the people began to steal and pillage”–said the Paulines. There’s hardly anything left in the city: there is neither food nor water. At times water tanks are found, but not many. According to the fathers, the tragedy is so great, it’s hard to imagine: “The people are trying their best to survive, but most lack food provisions; and, if they do have something, they cannot cook because there is no gas. Others have even resorted to eating out of the garbage.”

The Paulines also recounted their escape from the city. Together with a group of civilians, they organized, at great risk to their own lives, an unauthorized convey of one hundred vehicles bearing white flags. They managed to pass the first Russian road blocks but, ended up being stopped altogether. “I will never forget a pregnant woman who knelt before the separatists from the so-called Republic of Donetsk, begging them to let us pass”, said Fr. Tomaszewski. For those who had managed to flee Mariupol, it was an extremely difficult moment because everyone felt trapped. “It was well known–explained the Pauline–that the Russians were waiting for nightfall to shoot at us so as to put the blame on the Ukrainian army afterwards. Then during these dramatic moments, a man from a nearby village appeared unexpectedly during the afternoon. He requested the soldiers not to keep the people outside, because it was so cold. He offered to take us to the village, so that we could at least spend the night in the school and in homes.” The separatists finally let everyone pass when they discovered that the road came to an end at the village. However, it turned out that another road existed that completely bypassed the Russian road block. This is how the whole convey of nearly half a thousand people was able to continue travelling to the west. “I am profoundly convinced that our evacuation from Mariupol was a miracle, God had watched over us”, said Fr. Tkaczyk. Divine Providence often uses simple and relatively unknown individuals like that man from the Ukrainian village in order to perform both small and large miracles.

Today the fathers are in a safe location, but they continue to think about the city they have left behind and avow that when the war is over, they will return to Mariupol as soon as possible. “We shall see what remains of Mariupol and we will attempt to rebuild the city not only materially, but also spiritually”– concluded Fr. Tkaczyk. For sure, they will bring the icon of the Black Madonna of Częstochowa back with them, which is now also venerated in Ukraine.