The deception of war driven by ideals

Catholics too are fascinated by the opposing ideal motivations of the war in Ukraine: Western values of freedom against Russian totalitarianism, or the struggle of a Russian Christian leader against the New World Order. But it is neither; the reality is much more down to earth... 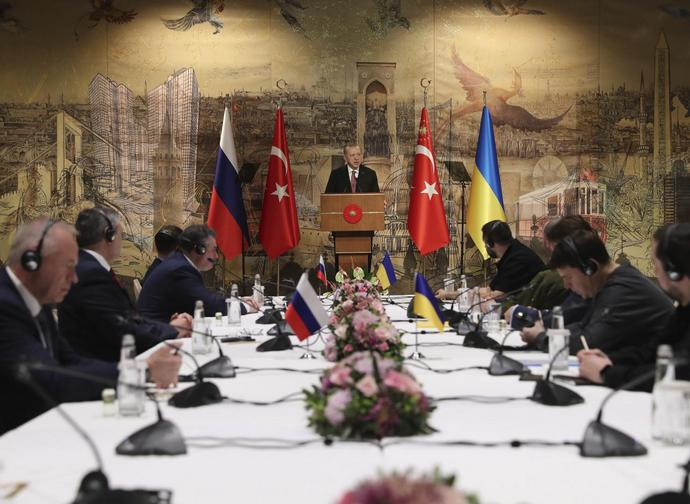 There have certainly been wars fought for ideals in history, but more often ideals are used as propaganda to cement public consensus around wars whose real purpose is much more down to earth. Matters of power, of geo-political and economic interests. What is happening in Ukraine is no exception, even if there is a marked tendency, including among Catholics on both sides, to cloak this war in highly improbable idealistic motivations. Deflating these "idealisms" will therefore be useful in order to wake up to a more realistic vision of what is happening and return to cheering for the rapid achievement of an agreement that silences the weapons, before the situation gets out of control (with certain heads of government in power at present this risk is very high).

I will limit myself to two opposing narratives. The first is the one that sees Ukraine in this war as a symbol of the defence of European values of freedom and democracy against Russian totalitarianism, of the aspiration to peace against the prevaricating violence of a country that has remained imperialist despite the change in regime. This is a repetition of the Cold War pattern, which Ukrainian President Zelensky and European governments insist on in order to unite Western public opinion against Putin and justify sending armaments to Ukraine.

That Russia is not a model of democracy and freedom is self-evident; that Putin has committed a serious and unjustifiable violation of international law by attacking Ukraine should be equally self-evident, but to claim that Putin is facing what during the Cold War was called the “free world” is quite laughable. If there is any international institution today that closely resembles the Soviet Union, it is the European Union, as the governments of those countries that joined the EU after decades in the Warsaw Pact have repeatedly reminded us in recent years.

And if today these countries understandably fear Russia's awakening, this does not detract from the fact that the Western socialist drift is stronger than ever. Two years of pandemic management, added to climate terrorism, gender dictatorship, and "Cancel Culture" should have made it clear by now that the West has become the home of a new totalitarianism. Exactly as John Paul II warned: “As history demonstrates, a democracy without values easily turns into open or thinly disguised totalitarianism” (Centesimus Annus, no. 46).

As far as the US specifically is concerned, only the naive can still believe that it is driven by love for the freedom of peoples: one only has to take a look at the US allies in the Middle East. But it is a fact that in this crisis alone, strategic and economic interests are reason for the Biden administration to constantly fan the flames, just as past (pre-Trump) administrations have played an important role in destabilising the region. To this must necessarily be added the prominence of the abortion issue: without even mentioning St Mother Teresa of Calcutta, can governments that promote as a fundamental human right the elimination of the most defenceless human beings be considered credible when they speak of peace?

The second narrative, on the contrary, sees Putin's Russia defending Christian tradition and identity against the corrupt West and the New World Order. We have just said that the West is corrupt and that there is growing totalitarianism in our societies. But that this automatically promotes Putin as a defensor fidei is a bizarre idea to say the least. If indeed, as Moscow Patriarch Kirill has implied, the war unleashed by Putin is against a West that imposes Gay Pride as a sign of belonging to the society of the good, one would have to say that at the very least he has the wrong target: he should strike Brussels instead of Donbass and Mariupol.

Nor should the spiritual references and closeness to the Orthodox Church be misleading: religion as an instrumentum regni is anything but new in Russia. It is also very dangerous to use the equation "the enemy of my enemy is my friend", because by the same yardstick we would then have to support Islamic fundamentalism and China (might this be the reason that an eminent Vatican prelate said China is the country that best applies the Social Doctrine of the Church?) And it is curious that, in order to go against the hated Yankees, it is considered irrelevant or, worse, justified, to question the territorial sovereignty of a country recognised by the international community, with destruction, deaths and millions of refugees. What do the poor fleeing Ukrainian citizens have to do with the New World Order (then I would like someone to clearly define what they mean by the New World Order)? I don't think people realise the seriousness of certain statements: if Putin's idea that Ukraine is not a country, but only part of Russia, is accepted, then why not agree with Iran that Israel does not exist?

The truth is that if we begin to free our minds from the romanticized visions of war and the ideals that drive it, we would rediscover a healthy realism that would make us look at the real interests at stake, and push for opposing interests to find a settlement at the negotiating table. It is curious to note that the basis of an agreement, as it is emerging in these hours, makes us ask: couldn't we have thought of that before unleashing this mess? Is there really anyone who can feel absolved of the serious responsibility for provoking this war?