The Christless Society of the Lord of the Flies

A new study by the British newspaper The Guardian reveals the true story that inspired Golding's famous novel The Lord of the Flies. It retraces Golding’s thesis of a violent and brutal human man that can only be prevented from emerging by civilisation. Yet, on closer inspection, it can be said that Golding was not wrong: he merely portrayed a society without the Catholic Church, founded by Christ. 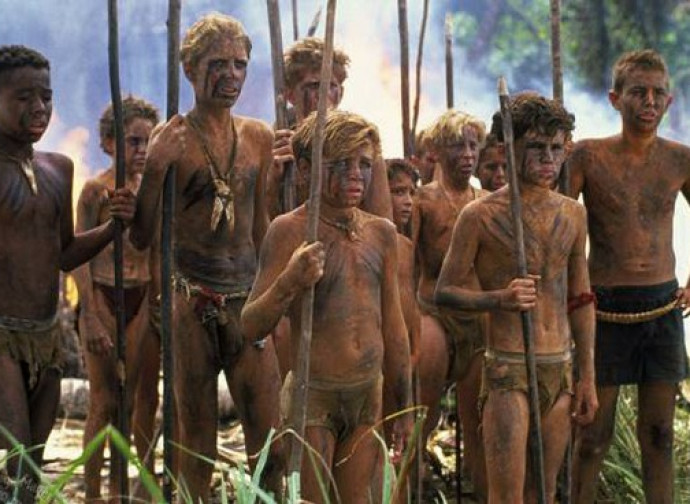 A few days ago, an interesting article by Dutch historian Rutger Bregman appeared in the liberal newspaper The Guardian. His article essentially verifies theses that inspired the famous novel The Lord of the Flies by the Nobel Prize winner William Golding (1911 - 1993).

The story is well known. There is an unspecified war. A group of children, members of an English school choir, are traveling by plane when it crashes on an island. The children, therefore, find themselves having to survive and organise coexistence without adults to guide and protect them. Hence, they live in a "state of nature", that is, without a civilisation to determine their lives. What happens? Unfortunately, all the worst one can imagine. The boys begin to fight over power and divide into two groups: hunters and everyone else. The fear of a monster emerges and a divinity is created. They hang a pig's head from a pole and begin to treat it as a god: the lord of the flies, Beelzebub.

In the meantime, the two groups regress to savagery, symbolised by the ritual colours the children paint on their faces. Violence and abuse continue until, during an orgiastic rite, they kill one of the boys (in a real human sacrifice). What follows is a crescendo of brutality on the island: murders, torture, and the island is set on fire. When a catastrophic end appears imminent, a ship arrives to save the boys.

Golding's book has had various interpretations. However, generally, the novel is used as a symbol of man’s violent and brutal nature which only civilisation may prevent from emerging. The book, critics say, reflects the anthropological vision of a man who grew up as an alcoholic, was violent, and as a teenager, attempted to rape a 15 year-old girl. "I've always understood the Nazis," confessed Golding, "because I'm, by nature, that kind of man." After his book’s publication, he stated the famous aphorism: "Man produces evil as a bee produces honey." The Lord of the Flies is a very famous book, indeed. Just think that it is required reading in Anglo-Saxon schools (all children are educated in Golding’s vision of man). Even the rock band U2 took inspiration from the novel, naming a song on their debut album, Shadows and Tall Trees, from one of the chapters in The Lord of the Flies.

In 1965 six boys aged thirteen to sixteen, all students of a school in Tonga, stole a small boat and set off into the unknown sea in search of adventure. They had no map or compass. Unfortunately, during the night, they were hit by a storm. It left them without sails or rudder. They drifted for eight days straight, without food or water, until they landed on a rocky and inhospitable island called 'Ata. 'Ata had been uninhabited for about a century because it was considered uninhabitable. The boys managed to survive for fifteen months there, until they were rescued on Sunday, 11 September 1966 by a small boat that saw them by chance.

The boys had organized themselves by dividing the tasks between growing vegetables, maintaining watch, and cooking. They found some hens abandoned a century earlier by the few inhabitants of the island and began to breed them. They ate peaches and coconuts. Every morning, as soon as they got up, they began their days with song (accompanied by a guitar which they had built by makeshift means) and prayer. One of the boys broke his leg on the rocks. His companions put it in splint and his limb healed perfectly. They also set up a small gym to keep fit.

Apparently, it is the same story as Golding’s novel, yet ends in a completely different way. The British author deceived himself about human nature. He assumed that all men lived by impulse, while this is not so. This is simple, beautiful and instructive to contemplate. Unfortunately, however, life is more complicated than this. There is one small detail in the story told by Bregman that can make a big difference and which casts new light on Golding's fictional story.

The Lord of the Flies has always been read as an anthropological text which expounds a thesis about human persons, civilisation, and the state of nature. But what if his novel had a religious reinterpretation?

Allow me to explain. Golding's book is based on English anthropology, a liberal or whig vision of human nature, however we want to label it. At any rate, it is the anthropology of Thomas Hobbes (1588-1679) who said: homo homini lupus (“every man is a wolf for the other man”) and bellum omnes contra omnium (“the war of all against all”). It is based on man’s individualism that prevails over the common good; on the state that prevents a total war for private property. It is the philosophy of the Royal Society, what happens when we reject Aristotelian metaphysics as well as moral and religious law. It is the abandonment of Catholicism and a return to paganism, that is, to the dark forces of nature, alchemy, and magic. It is a return to the cult of Baal, to the lord of the flies.

This is the slippery slope that the British Empire went down when, in the 16th century, by rejecting the Church founded by Christ. It put the Empire on a path of piracy, usury, social Darwinism, eugenics, racism, slavery, and colonialism. The premises seemed good, being finally freed from moral shackles, from the interference of the Church, but it was not so.

This interpretation is supported not only by Golding's biography, a pure representation of this ideology. It is also obvious in the novel’s conclusion which reads:

“It was like that at first,” said Ralph, “before things—” He stopped.
“We were together then—”
The officer nodded helpfully.
“I know. Jolly good show. Like the Coral Island.”
Ralph looked at him dumbly. For a moment he had a fleeting picture of the strange glamour that had once invested the beaches. But the island was scorched up like dead wood—Simon was dead—and Jack had. . . . The tears began to flow and sobs shook him. He gave himself up to them now for the first time on the island; great, shuddering spasms of grief that seemed to wrench his whole body. His voice rose under the black smoke before the burning wreckage of the island; and infected by that emotion, the other little boys began to shake and sob too. And in the middle of them, with filthy body, matted hair, and unwiped nose, Ralph wept for the end of innocence, the darkness of man’s heart, and the fall through the air of the true, wise friend called Piggy.

The officer finds boys to be sunburnt savages who have consciously waged war and even killed some of their own companions. He says to them:
"I would have thought you were a group of English boys ... You are all English, right? ... They would have been capable of something better ... I mean ...". In short, five hundred years of English philosophy have conquered the sea and half the earth; it created science, an empire. This is what means to be English ... I thought you would have created wonderful things, and instead, ... [you have turned to] murder, paganism, human sacrifice.

And the boys cry. All of them. They cry "the end of innocence", the end of the British dream which turns out to be a nightmare. The law of survival of the fittest bore no wonderful fruits of prosperity and civilisation. Rather, it bore death and destruction.

Now I can reveal the small detail of Bregman's story. It is a essential element to the story which ensured the six Tonga boys did not share the same ill fate of Golding’s novel. The children were all Catholics. They were Catholic schoolboys and continued to live as Catholics on the island of 'Ata. That's the small, but important detail that turned out to be a game-changer for the Tonga boys’ happy ending.

Golding is not wrong. He made no mistake in painting man who once unleashed from the cage of human society may return to the most ferocious forms of barbarism. Only he was portraying a society without the Catholic Church, founded by Christ.

Extra Ecclesia, nulla salus. “Outside the Church, there is no salvation.”