The Child Jesus rejected by Dickens

Christ in the House of His Parents is a painting by Sir John Everett Millais that has attracted a lot of negative criticism, the most virulent being that written by Charles Dickens, who accused the artist of having depicted Jesus too obviously as a Jew and Mary as a drunkard. This is the story of an artist who founded the Pre-Raphaelite movement. 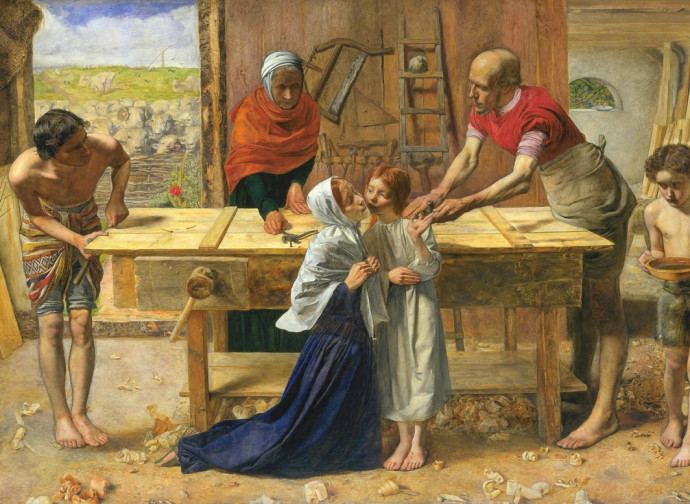 We continue our virtual visit to the gallery with the fewest paintings in the world - the one displaying works of art inspired by Jesus' childhood and adolescence. There are very few and they are almost unknown.

Today we are discussing a painting that, when it was exhibited to the public for the first time in 1850, provoked much negative criticism, the harshest being that written by Charles Dickens. The great writer accuses the artist of having depicted Jesus too obviously as a Jew, because of the colour of his hair (red). Not only that, but in his scathing review, Dickens lashes out at the artist, guilty, in his opinion, of having represented Mary as a drunkard.

In reality, the painting is of astonishing realism: we see the Holy Family in Joseph's carpentry workshop, with the adolescent Jesus who has injured his hand (a symbol of the future crucifixion) and is consoled by Joseph and Mary. A child (John the Baptist) arrives with a bowl of water to wash his wound, a symbol of baptism.

The author of Christ in the House of His Parents is no less than a baronet, Sir John Everett Millais (1829-1896), an English artist and founder of the Pre-Raphaelite movement.

Born in Southampton, in the south of England, into a prominent family from Jersey, where he also spent his childhood, Millais showed a true genius for art from an early age. This was the reason why his family decided to move to London, precisely to facilitate the boy's proximity to the Royal Academy of Arts, where he was admitted (a unique case in the school's history) at the tender age of eleven. There he would make an encounter that would change his life: he became friends with William Holman Hunt and Dante Gabriel Rossetti with whom he formed the Pre-Raphaelite Brotherhood (known as the "PRB") in September 1847 in his family home. This movement took as its model to imitate the painting of the Italian masters of the 15th century, predecessors of Raphael.

Millais' Christ in His Parents' House (1849-50) was highly controversial because of its realistic depiction of a working-class Holy Family working in a messy carpentry workshop. (Indeed, Millais was used to criticism: his later works were also controversial - though less so). 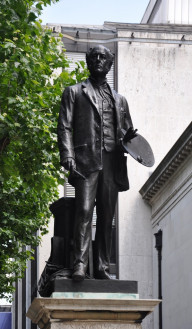 The artist achieved popular success with A Huguenot (1851-52), which depicts a young couple about to be separated due to religious conflicts. He repeated this theme in many subsequent works. All of these early works were painted with great attention to detail, often focusing on the beauty and complexity of the natural world. Even in paintings such as Ophelia (1851-52) Millais masterfully integrated naturalistic elements. This approach is considered a kind of 'pictorial ecosystem'. Mariana is a painting that Millais painted in 1850-51 based on William Shakespeare's play Measure for Measure and Alfred, Lord Tennyson's 1830 poem of the same name. In the play, the young Mariana was to be married, but was rejected by her betrothed when her dowry was lost in a shipwreck.

This style was promoted by the critic John Ruskin, who had defended the Pre-Raphaelites against their critics. But Millais' friendship with Ruskin led him to meet Ruskin's wife, Effie, who served as Millais' model for his painting The Order of Release.

This painting was also the cause of the two young people falling in love. Although she had been married to Ruskin for several years, the marriage had never been consummated, which is why it was annulled at the insistence of her parents.

And so, in 1855, after her marriage to Ruskin had been annulled, Effie and John Millais married. They had eight children (the youngest, John Guille Millais, became a naturalist, wildlife artist and posthumous biographer of Millais). Their daughter Alice (1862-1936), later Alice Stuart-Worsley after marrying Charles Stuart-Worsley, was a close friend and muse of the composer Edward Elgar, and is thought to have been an inspiration for the themes of his Violin Concerto.

After their marriage, Millais began to paint more, in a different style, leading Ruskin to call this artistic activity 'a catastrophe'. It became a general belief that Millais had to paint more to meet the expenses of his ever-growing family. Hostile critics such as William Morris accused him of "selling out" to gain popularity and wealth. His admirers, on the other hand, emphasised the artist's links with Whistler and Albert Moore and his influence on John Singer Sargent.

Millais himself said that as he became more confident as an artist, he could paint with greater boldness. In his article 'Thoughts on our Art of Today' (1888) he recommended Velázquez and Rembrandt as models for artists to follow. Paintings such as The Eve of St Agnes and The Sleepwalker clearly show an ongoing dialogue between the artist and Whistler, whose work Millais strongly supported. Other paintings from the late 1850s and 1860s can be interpreted as anticipations of aspects of the Aesthetic Movement. 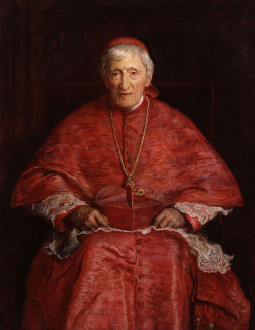 Later works, from 1870 onwards, demonstrate Millais' reverence for the Old Masters such as Joshua Reynolds and Velázquez. Many of these paintings depicted historical figures or themes. Notable among these are The Two Princes Edward and Richard in the Tower (1878), The North-West Passage (1874) and The Boyhood of Raleigh (1871). Millais is also the author of a famous portrait of Cardinal John Henry Newman (1888) exhibited at the National Portrait Gallery in London (photo).

The artist was also very successful as a book illustrator, particularly for the works of Anthony Trollope and the poems of Tennyson. His complex illustrations of the parables of Jesus were published in 1864. Millais was elected an associate member of the Royal Academy of Arts in 1853 and was soon a full member of the Academy, of which he was an important and active participant.

In July 1885, Queen Victoria made him a baronet, of Palace Gate (Middlesex) and Saint Ouen (on the island of Jersey), making him the first artist to be honoured with a hereditary title. After Lord Leighton's death in 1896, Millais was elected President of the Royal Academy. In addition, between 1881 and 1882, Millais was elected and acted as President of the Royal Birmingham Society of Artists.

He died in 1896 of throat cancer. He was buried in the crypt of St Paul's Cathedral.

On his death, the Prince of Wales (later King Edward VII) chaired a memorial committee which commissioned a statue of the artist. The statue, by Thomas Brock, was installed in front of the National Gallery of British Art (now Tate Britain) in the east side garden in 1905. In 1953, Tate director Norman Reid attempted to replace it with Auguste Rodin's John the Baptist, and in 1962 he again proposed its removal, but his efforts were thwarted by the statue's owner, the Ministry of Works. The property was transferred from the Ministry to English Heritage in 1996, and from them in turn to the Tate.

In 2000, under the direction of Stephen Deuchar, the statue was moved to the side of the building to welcome visitors to the refurbished entrance on Manton Road. In 2007 the artist was the subject of a major retrospective at Tate Britain, London, which was visited by 151,000 people. The exhibition then moved to the Van Gogh Museum, Amsterdam and later to Fukuoka and Tokyo, Japan, where it was seen by over 660,000 visitors.

Finally, we feel it is important to remember John Everett Millais' love for his homeland, Jersey. A love that the artist carried in his heart throughout his life and that he made concrete by keeping a cook from there in his service after his marriage, who prepared the typical local dishes. Because, as he himself wrote, "Gastronomy is also an art and the most complete of all, because it touches all the senses". And we can only agree.