The Hungarian Cardinal Jozsef Mindszenty, who today has been declared Venerable, opposed the Nazi regime, so he was captured, stripped, and beaten. He was then liberated by insurgent soldiers in Budapest, but he had to take refuge in the American embassy because he was also hostile to communism. When the Vatican began to make compromises with the regime, as it is doing today in China, the primate opposed it. 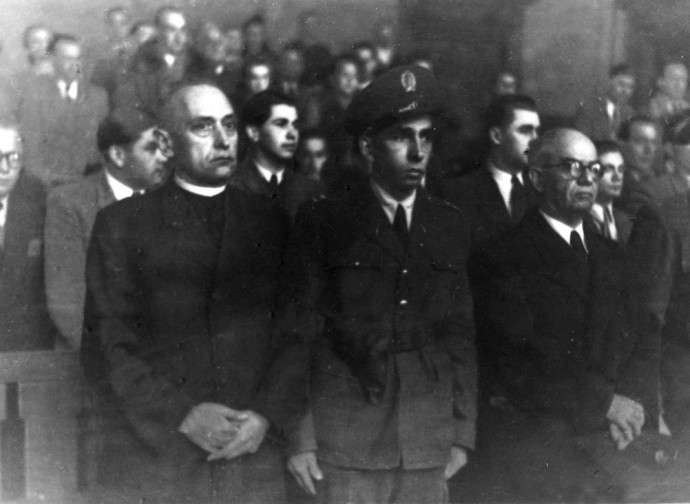 Forty-five years after his death, the symbolic figure of the Hungarian anti-communist insurrection of 1956, Cardinal Jozsef Mindszenty (in the photo on the left), Primate of Hungary, can teach us something today.

Born in 1892, he actually had a German surname, Pehm. The son of a direct farmer, he became a priest in 1915 and a professor at the secondary school in Zalaegereszeg. When the Habsburg Empire collapsed in 1918, he was arrested by the revolutionary government of Károly and then expelled by the subsequent communist government of Béla Kun. When this government fell, he was able to re-enter Hungary. From the beginning he was opposed to the alliance with Nazi Germany, to the point that he changed his surname to the place of his birth, Csehimindszent. In 1944 the Germans occupied Hungary and Mindszenty became the bishop of Veszprém; in this role he saved many Jews. At the end of 1944 the Soviets entered the country, pillaging and raping (the bishop of Györ, Apor, was assassinated while he was trying to defend the women who had taken refuge in his palace).

Mindszenty protested against the governments and was imprisoned. He was able to leave when the guards fled before the Soviets. In 1945 the communists took power and expelled the Apostolic Nuncio. In the same year, the Primate of Hungary died and Pope Pius XII appointed Mindszenty to replace him, even though he was the youngest of the Hungarian bishops. The prisons and the concentration camps were filled with dissidents, the communists blocked American aid to the starving population, the Catholic schools were nationalized, censorship muzzled the press.

In response, the cardinal led a pilgrimage of 100,000 people to the Shrine of Máriaremete, and in 1947 he announced a Marian Year in which five million people participated in the rites. The communists began to disturb his Masses and calumniate him in the press. In the meantime, they created a collaborationist group called “Priests for Peace.” In 1948, in order to intimidate the cardinal, they arrested his secretary, Zakar, reducing him to dementia through the force of their torture. Then they also took Mindszenty and locked him up in the palace which had previously been the headquarters of the Gestapo. Here they stripped him and dressed him up as a clown, and then beat him with batons. Every night they woke him up and tried to make him sign a confession; if he refused, they beat him. This went on for a month and a half. At the end, physically and mentally destroyed, he signed a false confession (but he added next to it “c.f.” – coactus feci – I did this coerced).

The greatest hype was given to the show trial in 1949. In order not to make him into a martyr they gave him a life sentence. When his old mother saw that he had lost half his weight, she protested, but this only obtained his transference to an even harsher prison. He spent eight years here until the insurrection of 1956. On that occasion the government asked him to take action to rein in the protest but he refused. The insurgent soldiers freed him and brought him to Budapest in triumph. He found that all of the key posts among the clergy were occupied by “priests for peace.” The alternate premier, Tildy, asked him to mediate and Mindszenty suggested not to trust the communists but to turn to the UN.

On November 3, 1956, the cardinal spoke by radio to the Hungarian nation, but at midnight the Red Army invaded the country. A fierce repression followed, killing 30,000 victims and leaving hundreds of thousands of refugees. Mindszenty sought refuge in the American embassy, where President Eisenhower offered him political asylum. He could not leave, even for his mother’s funeral: the secret police stationed themselves permanently outside the embassy. In 1958 Pius XII died. The new pope, John XXIII, opened negotiations that were concluded by Paul VI. The Vatican Ostpolitik was content to fill vacant dioceses with “priests for peace” (more or less as is happening today with China).

But the irreducible cardinal stood in the way of the “détente” demanding public rehabilitation. In 1971 he was “pardoned” and able to reach Rome, where the Pope asked him to resign as Primate. It took him three years to capitulate; then he agreed to step aside and began to travel so as to assist Hungarians in exile. He died in Vienna in 1975 and was buried at the Austrian shrine of Mariazell, whose icon is also patron of Hungary. His remains were brought back to his homeland only in 1991. In 1955 Alec Guiness played Mindszenty in a film, and the experience led Guiness to convert to the Catholic faith. The film, The Prisoner, was rejected in Cannes and Venice.