The cardinal persecuted by the Soviets: “The Eucharist saved me”

Imprisoned, made to do forced labor, deported to Siberia. The Lithuanian Cardinal Sigitas Tamkevičius,a former Soviet prisoner, shares with The Daily Compass the horror of the anti-Catholic persecution in the former USSR. But at the same time, he testifies to the miraculous hope that comes only from faith in Christ: “In the beginning it seemed to be a cross that was too big, but today I understand that this trial was a great gift of God.” “How did I succeed in resisting? The Eucharist was my only strength.” 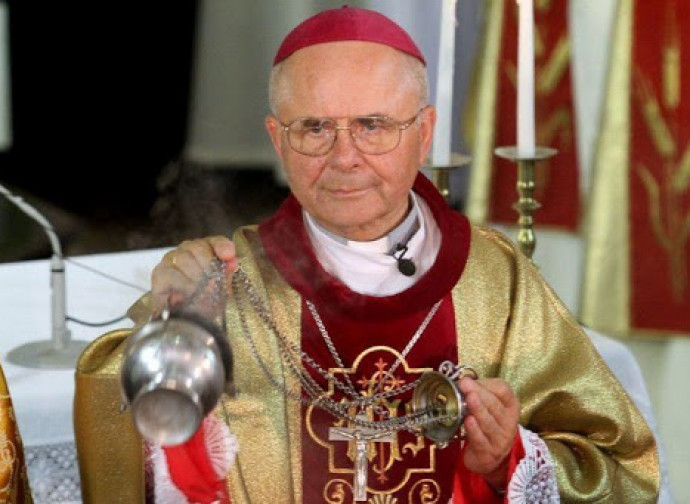 When he speaks of his experience, of the years spent in the Perm labor camp, in Mordovia and then in his Siberian exile, Cardinal Sigitas Tamkevičius still has teary eyes and a sad face. The archbishop emeritus of Kaunas, who was made a member of the sacred college of cardinals in the last Consistory, knows better than anyone else the meaning of the red colour of the biretta he received from the hands of Pope Francis: “To be ready to comport yourself with strength, even to the shedding of blood, for the increase of the Christian faith, for the peace and tranquility of the people of God and for the liberty and spread of the Holy Roman Church,” as the liturgical formula written for the occasion declares.

In 1983 the Lithuanian religious was condemned to ten years of prison and exile, charged with propaganda and anti-Soviet agitation for having sent “his” Chronicle of the Catholic Church of Lithuania to Western correspondents in Moscow. By means of this periodical he denounced the anti-Catholic persecutions of the regime. Before his sentencing, the Jesuit spent eight months at KGB headquarters in Vilnius, where he was subjected to 80 interrogations in an effort to make him “hand over” the names of the other editors of the journal. He did not give in, and thus he was sent to forced labor.

He was released only in 1988, after he had been deported to Siberia, with the arrival of the time of “perestroika.” Pope Francis visited the cell where he was detained in Vilnius, the Lithuanian capital, in 2018, and the archbishop emeritus of Kaunas silently accompanied him in those places that were still full of pain and sorrow for him. The pontiff was impressed by what he heard and saw on that occasion, and he “remembered” Tamkevičius by making him a cardinal (not an elector due to his age) last October.

The Daily Compass interviewed the new cardinal when he was in Rome for the formal “taking possession” of his titular church, Sant’Angela Merici and honoured by the faithful who came from Kaunas for the occasion as well as by the Lithuanian community present in Rome. The story of this ex-prisoner become cardinal is a story of suffering and redemption that reminds us of the anti-Catholic harshness of the regime and at the same time leads us to understand how unpredictable the work of God is.

Your Eminence, who more than you can testify that the red which you wear is a symbol of martyrdom…
During the days when the Soviet regime condemned me to ten years in prison it seemed to me that I received a cross that was too big for my shoulders. When I recall it now, I understand that this trial was a great gift for me. It was a gift that God wanted to give me personally, but that he also wanted to give to the faithful whom I served in those years [Editor’s note: at the time of his arrest Tamkevičius was a parish priest in Kybartai, Lithuania].

Your resistance to the communist regime used a periodical the Chronicle of the Catholic Church in Lithuania. What message do you want to give today to those who, by means of journalism and information, seek to oppose the climate of religious intolerance that is present not only in the last dictatorships but also in some democratic countries?
At the time the Chronicle was published we had the sole purpose of giving people very precise information about what the regime was already doing against the Catholic faith in our land. There was no need to add anything that was not true. Today I would like to tell the Catholic press to do the same thing: seek to report the news with the maximum amount of objectivity, because only the truth makes us free. And the truth should have Christian love and mercy as its “companions on the journey.” If we put truth in a journal that is full of hatred, the reader may take it in the wrong way.

What importance did the Eucharist have for you during your imprisonment?
When I was in the Soviet concentration camp, I often celebrated Mass secretly, in hiding. The Eucharist was for me the one source of strength that enabled me to keep going, despite all the difficulties.

Can we say that your cardinalate is the cardinalate of all the persecuted Catholics in the world, even of those who are still persecuted today?
You said it just right. I believe that the title of cardinal was not given to me only as recognition for the sufferings of the past, but also as a testimony for the faithful who still suffer today, as a sign to give them faith and hope.