The Bucha massacre and warmongering

If the desire for truth were the main issue, an independent international commission should be set up immediately to determine responsibility for the Bucha massacre. But the desire to use this episode to escalate the war and get Europe more involved seems to have gained the upper hand. 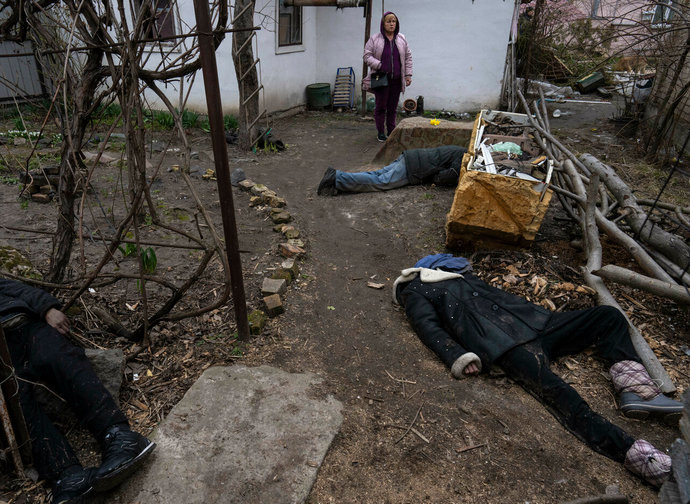 With each passing day, the sounds of war are growing louder, governments and the mainstream media are at one in calling for the Russian President Vladimir Putin’s head on a platter; and woe betide anyone who even dares to wonder why or to ask a few questions. They are immediately banished into the circle of traitors, pro-Russians, and denialists, as happened during the pandemic for those who refused vaccination or were critical of the Covid Pass.

So, now the enemy is Russia, and Putin in particular. On Tuesday, Italy together with other European countries, expelled 30 Russian diplomats, for an unspecified threat to national security; yesterday the European Union will launch new sanctions against Russia. And, above all, the military involvement of Western countries in support of Kiev is increasing day by day: yesterday even the Secretary General of NATO, Jens Stoltenberg, reiterated that NATO will increase its military support.

The soundtrack to this arms race is the massacre in Bucha, the town near the capital Kiev where - after the withdrawal of Russian soldiers - the bodies of hundreds of tortured and murdered civilians were found. The Bucha massacre immediately became the main indictment against Putin, once again described as a “war criminal” by US President Joe Biden. This makes it unthinkable to put up any resistance to this worrying escalation.

Yet, as we wrote yesterday and as several war correspondents claim, there is much to clarify about what happened in Bucha (see here).

Obviously, just asking a question is met with accusations or insults of all kinds, and this would be enough to raise suspicions. This is not because one does not believe that the Russian military is capable of such atrocities, of course: history, even recent history, provides many examples. But the Ukrainians have also been guilty of atrocities; sadly, this is what war is all about. Above all, we also know very well the role that propaganda plays in this war, as in all wars. And how many times have facts been created ad hoc to demonise the enemy and justify the war. This month we have also seen strong propaganda in action, on both sides. So nothing should surprise us. Therefore it is not a question of a culture of doubt, or conspiracy theory, or sympathy for Putin: it is a question of prudence in the face of facts whose explanation is at least incomplete.

This is why it would be a good idea to set up an independent international commission to quickly ascertain what really happened in Bucha. And it should be above all in Europe's interest to shed light on what happened, given the consequences that this episode will have on the continuation of the war. It seems, however, that there is no one who is serious about going down this road; it seems that the desire to fight this war is so strong that it cannot afford any hesitation: the Bucha massacre arrives as a timely justification for ever greater involvement, by silencing any opposition.

Rather, what happened in Bucha, whatever the explanation, should open our eyes to the fact that war is always atrocity, it is always death, it is always destruction: not only the destruction of buildings and structures, it is the destruction of hearts, it is the escalation of hatred and resentment that goes on for generations and is very often the cause of other wars. Only those who have merely read about war in newspapers or books can believe that it leads to a resolution of problems, and can overlook the catastrophic consequences of lengthening the timescale and widening the parties involved.

This is why efforts must be made to reach a ceasefire and agreement as soon as possible. Recognising the difference between the aggressor and the victim, and recognising the right to defence of the victim is not at odds with the search for a negotiated solution. It depends on the real goal at hand: in this case, whether to arrive quickly at as just a peace as possible, or to take the opportunity to teach Putin a lesson and weaken Russia.

It seems quite clear that the United States and NATO are aiming at this second objective; after all, the desire for a change of leader in Moscow has now been made explicit. But the implications of this choice are serious: because the first to pay is the Ukrainian population (including the Russian-speakers), which already has thousands of dead and 4 million refugees and on whose territory the fighting is taking place, And then it is Europe's turn: in the short term it is paid for financially, but we know how easily wars get out of control and we could find ourselves involved in a real conflict in which even atomic weapons would no longer be taboo. Unfortunately, as far as we can see, the race towards the abyss has begun.