The book on celibacy: the buck stops with Ganswein

After the uproar caused by the prepublication of extracts of the book in defense of ecclesiastical celibacy, signed by Benedict XVI and Cardinal Robert Sarah, the sensational about turn by Ratzinger's secretary, Monsignor Georg Gänswein is provoking discussion. He affirmed the pope's ignorance of the co-authored book project, though the facts deny this. And Cardinal Sarah confirms that agreements were clear and shared, and publishes letters from Benedict XVI addressed to him. What’s more the publishers also received the "approval to print" from Gänswein. Perhaps, after the received violent attacks, lies and threats, the secretary wanted to protect the pope emeritus, but he will actually obtain the opposite result: separating the pope emeritus from cardinal Sarah has only made it easier for their enemies to work to eliminate them. Meanwhile, the book will now be published by Cardinal Sarah, "with the contribution of Benedict XVI.” But the content, which is what matters, remains the same. 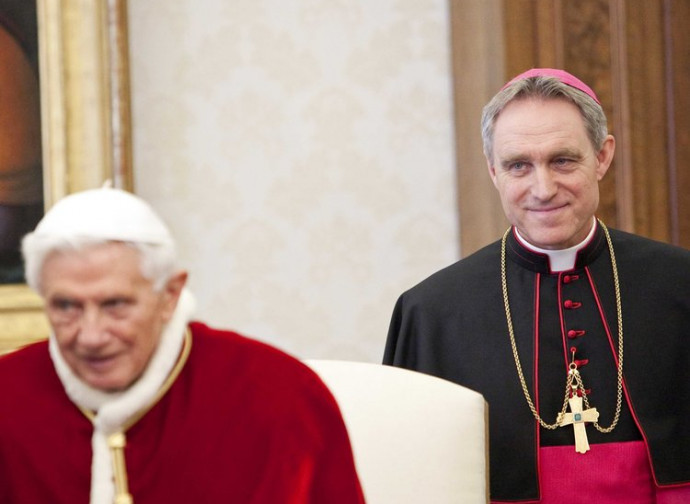 Let's start with the facts. The book, From the Depths of Our Hearts, which Le Figaro broke the news by publishing a few key passages thus causing a great fanfare, was truly the joint work of Benedict XVI and Cardinal Robert Sarah. The work consists of two essays on the priesthood, with a particular focus on celibacy, written respectively by Benedict XVI and Cardinal Sarah. Then there is an introduction and a conclusion signed by both: these were written by Cardinal Sarah but viewed and approved by Ratzinger. And the "approval to print" came directly from the personal secretary of Benedict XVI, Monsignor Georg Gänswein.

So what caused all the chaos in the last few hours and Gänswein's about-turn? Ratzinger's secretary said to newsagencies: "The pope emeritus knew that the cardinal was preparing a book and had sent his text on the priesthood authorizing him to make use of it as he saw best. But he hadn't approved any plans for a co-authored book nor seen and authorized the cover." The truth is, the publishers are able to demonstrate that Monsignor Gänswein is lying: he knew very well that the book would come out signed by both, and had given permission to publish having been warned of the enormous impact that the publication would have. Furthermore, from the evening of Monday 13 January, as soon as news about a dispute over signatures spread, Cardinal Sarah - speaking of "defamations of exceptional gravity" - posted on social media the letters written to him by Benedict XVI which demonstrate the pope emeritus’ knowledge of the plan to write a book.

In addition, the introduction corresponds to that half page prepared by Cardinal Sarah which is the subject of the letter sent by Ratzinger on 25 November: «Dear Eminence, I would like to say wholeheartedly, thank you for the text added to my contribution and for all the processing that you have done. It touched me deeply that you understood my latest intentions: I had actually written 7 pages of methodological clarification of my text and I am really pleased to say that you were able to write the essentials in a half page. I therefore do not see the need to send you the 7 pages, given that you have expressed the essentials in a half page. For my part, the text can be published in the form you have already seen."

On the morning of January 14, Cardinal Sarah published an official statement, which again reconstructs the whole process that led to the publication of the book: from last September 5, when he went to Benedict XVI at Mater Ecclesiae asking him for a "text on the Catholic priesthood, with particular attention to celibacy", until December 3 when, in a similar visit, he explained to Benedict XVI that "our book would be printed during the Christmas holidays and that it would be available on Wednesday, January 15.” In the middle of the dates that marked the different passages, largely already documented with the letters released in the evening of the 13th. In the conclusion of the statement, Cardinal Sarah speaks of "abject controversy": "I sincerely forgive all those who slander me or who want to oppose Pope Francis. My attachment to Benedict XVI remains intact and my filial obedience to Pope Francis is absolute.”

The issue then concerns why Monsignor Gänswein, on behalf of Benedict XVI, dramatically made a turn about with the double, dramatic result of putting Cardinal Sarah in serious difficulty and diverting attention from the contents of the book that remain confirmed and disruptive. Moreover, the most relevant theological statements on celibacy, which absolutely deny the possibility of exceptions motivated by social needs, are found precisely in Ratzinger's essay.

Certainly, the prior publication of key passages in the book caused an earthquake in the Vatican: a detonated bomb while waiting for the post-synodal exhortation which Pope Francis is expected to meet the requests contained in the conclusions, precisely with regard to the exceptions to the ecclesiastical celibacy. The reactions of the "guardians of the revolution" in fact were not long in coming: if on the one hand the great head of Vatican communication, Andrea Tornielli, wrote a "normalizing" article on Vatican News that sought to reconcile the position expressed by Ratzinger with that of Pope Francis, on the other, unleashed "his" men with the dual purpose of closing the mouth of the pope emeritus and soiling Cardinal Sarah, described as a deceiver of the pope emeritus depicted as a poor old fool. It is significant in this regard that Tornielli's "lap dog", Domenico Agasso jr, wrote the opening article of La Stampa on January 14, with the unequivocal title "Vatican, the problem with the Pope emeritus". Summary: "There is growing demand for a text that includes limits on the exercise of the magisterium of the resigned pontiff." Clear enough?

One can imagine the sort of pressure that was exerted on Benedict XVI and Monsignor Gänswein who, among other things, is prefect of the Papal Household, therefore in a delicate position between Ratzinger and Pope Francis. Given how violent public attacks are, we can easily guess what happened behind closed doors. This does not justify Monsignor Gänswein, but perhaps implies that, in the face of the threats and falsehoods being spread, he intended to protect Benedict XVI. The problem is that, he will obtain the opposite result: by separating the pope emeritus from Cardinal Sarah, he has only made it easier for their enemies to work to eliminate them. And at the same time it has weakened the contribution that these wise men, Benedict and Sarah intend to make to the debate on ecclesiastical celibacy, in order to stop the identity of the Church being attacked.
Cardinal Sarah wrote on twitter: "Considering the controversies resulting from the publication of the book From the Depths of Our Hearts, it has been decided that the author of the book for future publications will be: Cardinal Sarah, with the contribution of Benedict XVI. However, the full text remains absolutely unchanged.”