The arms of Mary toward Heaven

The Cerasi Chapel, the most famous chapel of the Augustinian church of Santa Maria del Popolo in Rome, is also called the Chapel “of the Assunta” or “of Saints Peter and Paul” in virtue of the expressive force of the works of art contained there: conversion, martyrdom and homage to the Virgin. It is the foundation of Christian doctrine. Carracci's Assunta opens her arms wide, demonstrating the desire to quickly reach the destination to which she is headed. The impetus of the momentum seems to project it into real space, from which the faithful observe the scene. Carracci's truth is measured by Caravaggio's naturalism. 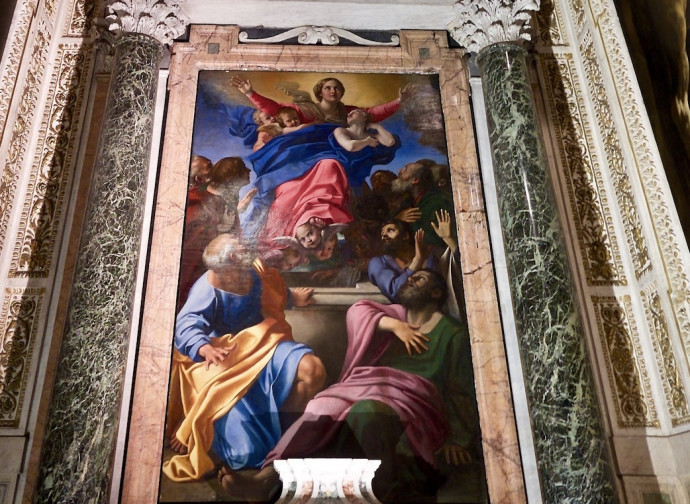 The Cerasi Chapel, the most famous chapel of the Augustinian church of Santa Maria del Popolo in Rome, is also called the Chapel “of the Assunta” or “of Saints Peter and Paul” in virtue of the expressive force of the works of art contained there, so powerful as to originate a sort of artistic synecdoche where one part – in this case the painting – serves to indicate the whole. Moreover, when Tiberio Cerasi, the treasurer of the Reverend Apostolic Camera during the papacy of Clement VIII, acquired this sacred space in the year 1600 in order to make it his place of burial, the completion of the iconographic program, which was already quite eloquent as it was, was entrusted to the two most requested painters of those years in the arena of Roman commissions: Michelangelo Merisi, better known as Caravaggio, who was tasked with the side paintings, and the older painter Annibale Carracci. And if the Caravaggian figures of the Princes of the Apostles referred back to the fundamental concepts of Christian doctrine – conversion and martyrdom – the altarpiece with the Assumption of the Virgin by Carracci was, and is, an homage to the patroness of the basilica. 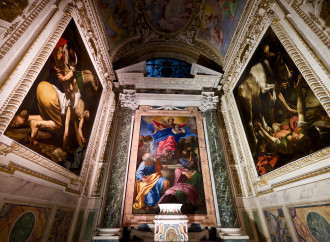 For the Bolognan painter Carracci, the theme was not new: the Assunta was the object of his study and attention in works that today are spread through many European museums, in Dresden, Madrid, and Bologna. The previous versions of the Roman altarpiece demonstrate all the charm and influence that Venetian painting with its brilliant colors had exercised on the maestro, who repeated, in these paintings, the same classical setting of the scene where, between the crowded earthly space of the empty tomb and the divine space of heaven, the miracle of Mary’s transitus was accomplished.

In Rome, the three levels intersect with each other, generating a more unitary composition whose strongly accelerated rhythm creates a greater drama, accentuated by the brilliant colors of the garments of the people depicted.  Everything takes place in the foreground: the Virgin, in the presence of the group of disciples gathered around the tomb, hovers in the sky, accompanied by festive cherubs who physically support her flight, pushing her upwards.

She opens her arms wide, demonstrating the desire to quickly reach the destination to which she is headed, which her sweet and focused gaze also yearns for. The impetus of her momentum seems to project her into the physical space from which the faithful view the scene. In doing so, the painter makes them participants in the miraculous event, like the apostles who occupy the entire painted surface, whose amazement is shown above all by the gestures of their hands, portrayed in different and studied positions of extension.

The accentuated dynamism, the wonder expressed by the postures and faces of the apostles, and their sculptural physicality, confers concreteness on the scene. The truth, however idealized, is also the inspiration of Carracci’s painting, which in this setting contrasts with the naturalism of Caravaggio: the two, even before being artists, were men who were diametrically opposed to each other, although we know that they held each other in mutual esteem.

The Caravaggian Peter who is being hoisted on the cross turns his gaze towards the Assunta, while Paul, or better Saul, fallen from his horse, opens his arms in a gesture similar to hers. Peter and Paul are disciples whom Carracci wanted to be in the front row contemplating the Assumption of Mary, making them, and us, witnesses of the fulfillment of the promise of eternal life after spending their earthly existence following Christ.