The anti-racism of anti-Western racists

An iconoclastic anti-racist fury has erupted and not just across the whole of the United States. It is now global. In England, monuments of Churchill and Gandhi have been vandalised. In America, images of Christopher Columbus continue to draw angry sentiments while the Hollywood classic “Gone with the Wind” has been removed from HBO Max. In Italy, "morelli" (little blacks) dark chocolate sweets are disappearing from shelves while the Indro Montanelli statue faces removal. But why? 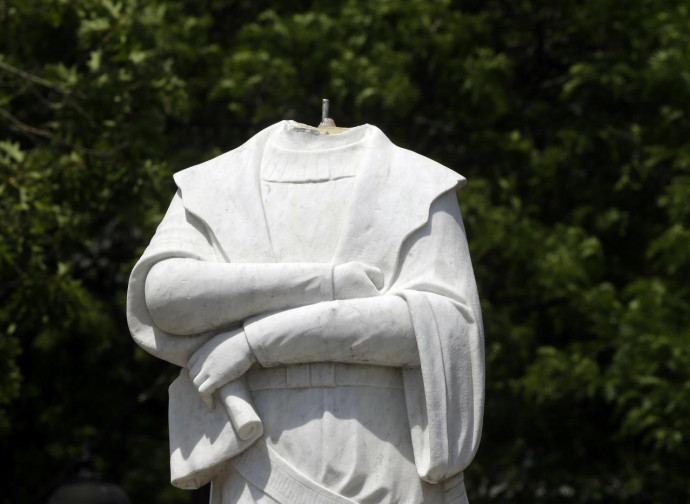 An iconoclastic anti-racist fury has erupted and not just across the whole of the United States. It is now global.

In the United States, statues of Christopher Columbus have paid a heavy price at the expense of angry demonstrators. One was destroyed in Minneapolis and another decapitated in Boston. In the city of Richmond, the equestrian monument of General Robert E. Lee, commander of the southern Confederate Army in the American Civil War, might soon be removed. Lee was not an anti-abolitionist. He had even received an offer from President Lincoln to lead the northern Union forces before opting to serve for his home state of Virginia in the south. Yet now, despite his history, Lee has been made a symbol of racist evil to tear down. An Abraham Lincoln monument was vandalised, too, in addition to one dedicated to fallen soldiers of the 54th Massachusetts Regiment (made up exclusively of African-American volunteers).

In London, a statue of Winston Churchill, the very man who stood tall against Adolf Hitler from 1939 to 1945 (and the only one to resist him between 1940 and 1941) was attacked. "Anti-fascist" vandals mocked his statue with "racist" graffiti, only because Churchill had led what was once the largest colonial empire in the world. And then there was the statue of Gandhi, the anti-colonialist par excellence. His statue in front of the Indian Embassy in London was likewise vandalised. Right-wing extremists were not to blame, but anti-racists offended by the historical comments Ghandi had made about black South Africans. In Italy, members of the Sentinelli movement have petitioned for the removal of Indro Montanelli’s statue. He was the eminent Italian journalist who "married", according to African tradition, a 12-year-old Eritrean during the Italo-Ethiopian War. His protestors will have no mercy upon him.

However, it is wrong to dissect the past of each character represented by statues or plaques. It is wrong to judge their specific faults and evaluate whether a posthumous damnatio memoriae - a casting their memory into eternal oblivion – is fair or not. For iconoclastic anti-racists and "anti-fascist", it is not about a specific individual or person. For them, it is more about attacking changing names and symbols. For example, NASCAR, the automotive racing association and very popular in the southern United States, has just made a radical decision. Rather than alienating its fan base and sponsors, NASCAR has pledged to take down all Confederate flags from its sporting events and facilities. Even before the Trump era, back in 2015, merchandise associated with the TV series, The Dukes of Hazzard, had been pulled of store shelves because Bo and Luke Duke’s muscle car had the nickname "The General Lee" (that’s right, the infamous General Robert E. Lee) and because it had the Confederate flag painted on its roof.

Gone with the Wind, a classic Hollywood film, has been removed from HBO Max’s film catalogue. Since it was set in the Old South, the film is, therefore, naturally deemed "racist". Ironically, the 1940 movie gave Hattie McDaniel (who plays "Mami", Rosella’s nanny) the honour of winning the first-ever Oscar by an African-American actress. In the face of growing anti-racism protests, an internet hoax had briefly circulated that Disney+ had removed its Calimero cartoon (the hapless little black chicken) from its video offerings. It wasn’t true. Regardless, one year ago, Disney+ had added written warnings to cartoons from the last century. It said that certain animated films contained "racial stereotypes", including a warning about the “Siamese song” (“the Siamese cat song”, not Thai citizens) in the film Lady and the Tramp.

The renowned British record company One Little Indian has now changed its name to One Little Independent so as not to offend Indians (even if the word  “Indie” has always meant "independent music"). The American country music band Lady Antebellum has been renamed Lady A and issued an apology to its fans. In Latin, antebellum simply means "before the war", but in the United States it is a word associated with the architectural styles of southern cities prior to the Civil War. Is this, too, a sort of apology for slavery? Meanwhile, the Swiss supermarket chain Migros has pulled "morelli" (little blacks) dark chocolate pastries from its retail selection. Apparently, the brand name is too reminiscent of certain racial stereotypes. So, it would be advisable to stock up on Italian Montenegro (Black Mountain) bitters and Nero d'Avola (Black Avola) wine before they are banned from store shelves as well.

It would seem, therefore, wrong to dwell on the profile of individual characters whose statues are now being removed and vandalised. It is wrong to try and define their merits and failings. It doesn’t matter, because today's anti-racist iconoclasts have already moved well beyond this form of judgement. It is not just London’s mayor Sadiq Kahn who is appointing commissions of experts to remove statues and change street names reminiscent of Britain’s colonial heritage, but it is also other private and public institutions doing the same thing. They are bullied by an aggressive minority to rush to erase names, uses, customs, objects and everyday products in an effort to cancel a past that is viewed as reprehensible.

It is the same exact technique repeated throughout all totalitarian regimes, from Lenin to Mao, via the systematic removal of the past for the construction of a new society. It is a process that begins with the annihilation of symbols and the gradual construction of a new language. What are the new iconoclasts really aiming at? While their Marxist predecessors wanted to rub out any sense of religion, private property, and national tradition to create an atheist and united world of equals, these new revolutionaries want a united world in which non-Western traditions are exalted and Western ones destroyed.

Christopher Columbus is hated, above all, because he was the European and Christian discoverer of the Americas. He is hated because defenders of pure identity are convinced that pre-Columbian native Americans were better off before the arrival of European settlers. British heroes directly or indirectly linked to colonial history (like Churchill) are hated because the Europeanisation and Christianisation of Africa - a "happy" continent until the arrival of the whites- is detested. Americans, whether from the South or North, bear the "original sin" of having supplanted Native American tribes to build a European Christian society in their place. It doesn’t even stop with the purification of the purest: Gandhi, the hero of nonviolent resistance to colonialism, isn’t sufficiently nativist in their eyes. According to iconoclasts, all traditions, stereotypes, idioms and even little black dark chocolate sweets which invoke racist notions will and must be purged.

Yet these "revolutionaries" never ask themselves a fundamental "if": what would the world look like if Christian civilisation had never been established? The American pre-Columbian populations had slaves, practiced mass human sacrifices, and waged war among themselves. Why blame the last of their invaders, just because they were Christians? The same also applies to Africa, an unhappy, never peaceful continent and a land that is far from free: it experienced its first period of demographic and economic growth only after European colonisation. The protests of Westerners (very often educated and well-off) against their own Western culture is a vice found only in the West. This vice is only found in Western societies where Christianity, from which fundamental human rights are derived, grants citizens the privilege of decrying perceived injustices and the liberty to protest against them.