The ugly and questionable Vatican Crib: the message is clear, explicit, and intentional. It is no longer the sacred representation of an event that took place, but the pretext to say other things that are pressing to the world - especially to the cultural mainstream - and to today's society. 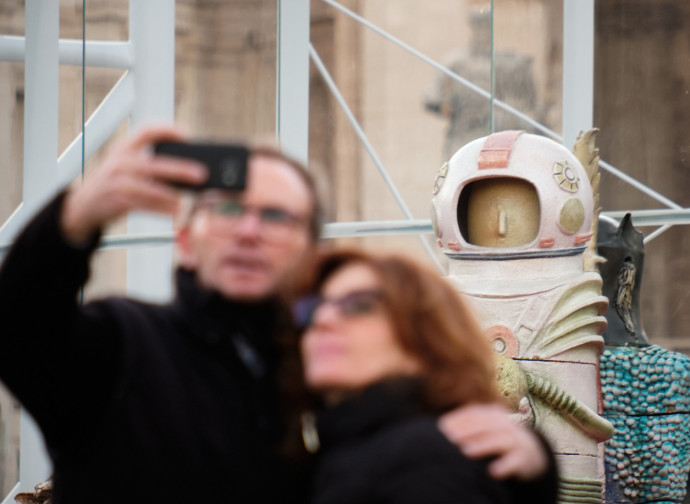 What is happening with regard to the Crib in St Peter's Square is interesting, and at the same time emblematic. The whole world is talking about it, but not exactly in enthusiastic terms. The inauguration took place on Friday afternoon, 11 December, and those who visit it are shocked, surprised, even confused, because it should be the most beautiful Crib in the world. This year, however, it has the distinction of being the ugliest.

In its entirety it is made up of 54 large statues, including an Islamic man, a Jewish rabbi, an astronaut and even an executioner (in reference to the death penalty), but only some of the figures are on display in St Peter's. One small consolation.....

The blunt and embittered comment by Vittorio Sgarbi, who, as an art critic, is certainly highly competent: “Don't go to see it.” The Vatican Crib has no connection with the Catholic religion. The characters look like astronauts... What did the Pope think when he saw it? Maybe he knew nothing about it. But knowing nothing about it does not justify this obscenity. It does not justify the humiliation of Catholicism”.

On the blog of the Italian Vaticanist Marco Tosatti a petition has been posted “or rather a supplication to the reigning Pontiff so that he may graciously put an end to the indescribable caricature of the crib that afflicts St Peter's Square and those who visit it”. Signing it is almost a must, but we already know that it will almost certainly be of no use. The reason is simple: this year's crib is the synthesis and emblem of the “New Church” whose consolidation is being attempted.

The statues will not be removed, and the supplications will fall on deaf ears (like so many others, after all...), because they represent at best what Modernism is: a profound rethinking of the Christian message in the light of the demands of contemporary society, in which things from Tradition are blended with new things, typical of today's society and perhaps light years removed from the faith. Isn’t this what these horrible statues represent? At the same time, don’t they say just as clearly that the Christian event is not, after all, a historical event, made up of people in flesh and blood, with specific faces, but above all a concentration of symbols and interpretations? So why should we represent the scene of the Nativity in a realistic manner?

The message of this crib is clear, explicit, and intentional. This is why Jesus, Mary, Joseph, the shepherds, and with them all the other characters in the Nativity scene, must fade away to the point of almost disappearing, being themselves but also being something else. Above all something else. The Crib is no longer the sacred representation of an event that took place, as Saint Francis first recreated it in Greccio (“Saint Francis called a local man, named John, and asked him to help him to fulfil a wish: ‘I would like to represent the Child born in Bethlehem, and somehow physically see with the eyes, the hardships in which He found himself because of the lack of those things necessary for an infant; how He was laid in a manger and how He lay on the hay between the ox and the donkey’... The people who flocked to the Christmas scene showed an unspeakable joy they had never experienced before”: Pope Francis, Apostolic Letter “Admirabile signum”). Instead this Crib is the pretext to say other things that are pressing for the world - especially the cultural mainstream - and today's society.

The text of the petition states: “This year's Nativity scene in St Peter's Square is incomprehensible to many men and women of all ages and categories, to many fathers and mothers, and especially to their children, who would like to see Jesus, Mary and Joseph as they really were, not as indecipherable representations”. But that is precisely the aim! It will be necessary that these old-fashioned, outdated Christians, and above all their children, the new generations - understand once and for all that Christianity really is an indecipherable representation (“there were no recorders”, let alone cine cameras ...), and that we have finally come to understand that Christianity serves only to build, along with other religions and every man of good will, the perfect world on this earth!

Let us therefore expect, in response to the widespread complaints and pleas, the reply of the promoters of this New Church, who will tell us that we understand nothing about art, and that we are retrograde, obtuse, unashamedly traditionalist, prejudiced and always ready to criticise, and therefore unable to grasp the beautiful, the positive, the good message of universal brotherhood that they express.  No, the statues will not be removed, because the project must go ahead. We can only pray that the time of trial is reduced.