The 21 martyrs killed by ISIS, true followers of Christ...

Five years have passed since 21 young Christian men were brutally slaughtered on a Libyan beach by Islamic State members. Twenty were Coptic Christians, Egyptians working in Libya, the 21st came from Ghana. Before the execution, they raised their prayer: Ya Rabbi Yassou, “O Lord Jesus”. The Coptic Orthodox Church declared them martyrs, and a book has reconstructed their life. A life based on a truly lived Gospel, with no compromise with the world. 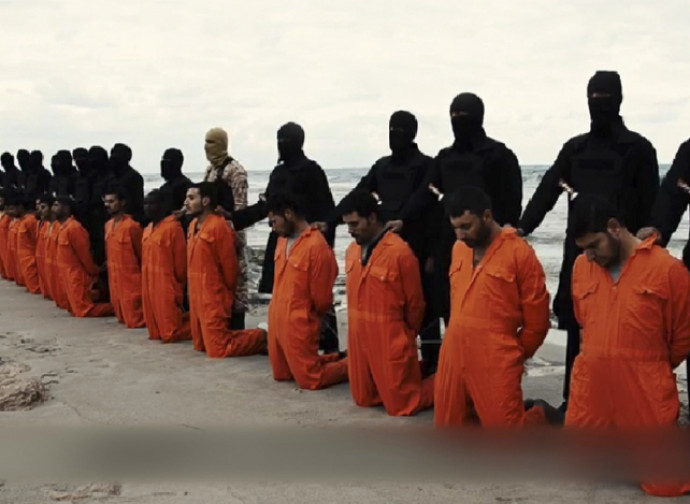 Five years have passed since, on a Libyan beach, 21 young Christian men were brutally killed, throats cut, by as many executioners belonging to the self-proclaimed Islamic State, for refusing to renounce their faith in Jesus Christ. A mass murder deliberately choreographed and turned into a spectacle by Islamic terrorists who made the video of the horrific massacre go viral, in order to demonstrate their strength and create panic and submission among Christians around the world. The video was entitled by the authors: “Message signed in blood to the Nation of the Cross”. It was February 15, 2015.

What struck those who found the courage to look at those terrible images was the acceptance of the young prisoners. An acquiescence that in reality proved to be nothing more than the full acceptance of a death that was now inevitable and the desire to give totally to Jesus the last moments of their life.

Impossible to forget that row of men dressed in orange jumpsuits being marched along the beach, their hands tied behind their backs, by masked men dressed from head to toe in black and armed with knives with long blades.

Of those 21 men, 20 were Coptic Christians, Egyptians working in Libya; the 21st was from Ghana. Each of the prisoners was forced to kneel in the sand and then beheaded. Their bodies were found on October 7 in a mass grave near Sirte, thanks to the confessions of some Islamists arrested after the fall of the Libyan city.

The video enables us to clearly lip-read the victims’ last words while the knife blades touch their throats waiting for the execution order: they were praying: Ya Rabbi Yassou, “O Lord Jesus”. In an interview given to Tempi magazine, the bishop of Minya, where most of the murdered Christians came from, Monsignor Anba Macarius said:

“Christian tradition tells us that this is a habit of martyrs: they ask the torturers to let them pray before they are killed. At that moment they prayed for their murderers, for the judges who had condemned them and for the executioners. When their lips were moving, they were asking God to confirm them in the faith and to forgive their murderers, as taught by the first martyr, Jesus Christ: “Father, forgive them because they know not what they are doing”.

The Coptic Orthodox Church declared them martyrs. Their names were included in the Coptic Synaxarion (equivalent to the martyrology of the Latin Church): the Orthodox Patriarch Tawadros II established that their memory should be celebrated on the same date of their execution, February 15.

During the general audience of September 18, 2019, speaking about martyrdom, Pope Francis recalled these young men who died with the name of Jesus on their lips: “Martyrs give their lives, they do not hide that they are Christians. [...] Let us think back to four years ago, when on that Libyan beach those Orthodox Coptic Christians, true workers, were all slaughtered. But the last word they uttered was “Jesus, Jesus”. They had not sold out their faith, because the Holy Spirit was with them. These are today’s martyrs!”.

The German author Martin Mosebach, who was initially struck by an image he came across in a magazine, watched that video, like so many others, and was shocked by the faces of the murdered men: they showed no terror or fear, but met their atrocious death with acceptance and calm. These men were ready to bear witness to their faith through martyrdom. So he wondered about the life and faith of these men: where did they come from, what training had they received and what kind of tradition and culture had led them to such heroic acceptance of martyrdom?

The book “The 21: A Journey into the Land of Coptic Martyrs“ (originally published in Germany in 2018 and translated into English in 2019) aims to answer these questions. The story is told in 21 chapters, each of which begins with a photo of one of the martyred men. In 2018 Mosebach went to Egypt to visit the villages where the twenty beheaded Christians came from. He spoke with their families and their neighbours, their bishops and priests. Among them he found no wish for revenge, only the pride of having a martyr in the family, a saint in Heaven.

The author of the book spoke with the Copts living and working in Cairo, who complain about the silence of the government and the local media about the real situation of Christians in Egypt. A religious minority discriminated against and too often the victims of violence and murder. As Mosebach points out, the twenty martyrs are not the only victims of persecution: the massacres in Abbassia in December 2016 and on Palm Sunday 2017, which took place in Alexandria and Cairo, are another clear example.

It is precisely this permanent state of persecution that has strengthened the faith of the Christians of Egypt, allowing them to live Christianity in a radical way without compromising with the world and the society in which they live. Mosebach says that many relatives and fellow countrymen of these martyrs speak of miracles that have occurred thanks to their intercession. Extraordinary healings, weeping icons... the awareness of these prodigious events has been confirmed by sources close to the Egyptian Catholic Church, though with due prudence. The Egyptian government has decided to build a Coptic church at El-Aour in their honour: the “Church of the Martyrs of Faith and Homeland”, which has already become a pilgrimage destination.

Born in 1951, Mosebach is a novelist, screenwriter, playwright and poet. His novels translated into English include “The heresy of formlessness” and “What was before”. Also available in English is his 2019 collection of essays, “Subversive Catholicism: Papacy, Liturgy, Church”. “The 21” is his first essay.

This investigation into the land of the martyrs is a valuable document because it shows us a living church that forms Christians who embrace the Gospel with their lives, without adapting or belittling it, without taming or lessening it, but understanding and assuming it in all its radicalism.  Persecution and martyrdom are part of the Gospel message as an ever latent possibility, because Christians are called to “lose their life” in order to find it again.  “...Whoever wants to save their life will lose it; but whoever loses their life for me will find it. For what good will it be for someone to gain the whole world, yet forfeit their soul? Or what can anyone give in exchange for their soul?” (Mt 16:24-26)

These are harsh, shocking words. “Many of the disciples, after listening to them, said, ‘This language is harsh; who can understand it?’” Words difficult to accept for us Christians of the West, too often accustomed, in our middle-of-the-road spirituality, to contextualise, to comment, to enculturate, to compromise... Words that, on the contrary, many men have welcomed and – with the help of Grace – put into practice, even in our day: saints and martyrs who remind us that being Christian means to follow the way of the Cross, to renounce living for oneself and to be ready to give one's life for love of Christ.