Thanks to Trump: 17 uncompromising pro-lifers elected

Out of the recent elections, a not so obvious victory emerges: (as of Friday) the number of pro-life women in the U.S. House of Representatives has doubled. There are 17 (with 5 more are still in the running) new pro-life warriors among congresswomen. Half of them have flipped seats previously held by Democrats, all the while underscoring their opposition to abortion and socialism. 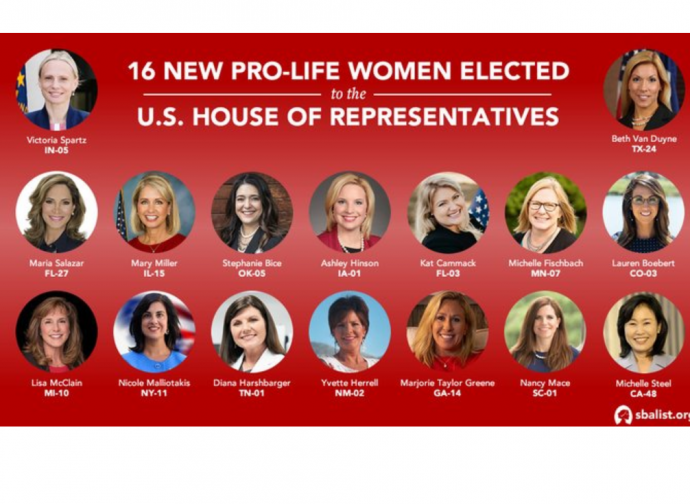 One sure thing has surfaced in the aftermath of the U.S. elections: a victory that no major television network has highlighted, but which nevertheless raises the hopes of American pro-lifers, of all of us. (As of yesterday) the number of pro-life women in the House of Representatives has doubled. The 2020 American elections brought 17 newly elected warriors to the fight for life and the family, in addition to the 11 that were re-confirmed and another 5 who could still claim victory once the ballot counting has ceased in the next few days.

Eight of the 17 newly elected congresswomen flipped seats previously held by Democrats. Take, for example, the newly elected representative from New Mexico, Yvette Herrell. She ousted incumbent Xochitl Torres Small, who had a 100% approval rating from NARAL, the pro-abortion lobby.

The newly elected representative, Maria Salazar of Florida, is a similar case. She will replace Donna Shalala, who formerly served as President Clinton’s Health and Human Services. In the 1990’s, it was Shalala who had covered up the horrific murders of abortionist Dr. Henry Foster.

Salazar, on the contrary, openly touted her pro-life ideas throughout the campaign and won. This trend of voters choosing pro-life representation over abortion extremism is reflected throughout the United States - from Stephanie Bice's victory in Oklahoma to Nicole Malliotakis' victory in New York. This wave of pro-life women is a huge blow to the opposition and blatant denial of the unhealthy idea that women are for abortion and that those who reject it are marginalised. Just the opposite is true. American pro-life women are popular and are elected to Congress, not by decisions of the media and lobbies but by the sovereign people themselves.

As of today, a proud and multiethnic group of newly elected Republican congresswomen consists of Maria Salazar, Yvette Herrell, Michelle Fischbach, Nancy Mace, Stephanie Bice, Ashley Hinson, Nicole Malliotakis, Lauren Boebert, Lisa McClain, Kat Cammack, Diana Harshbarger, Mary Miller, Marjorie Taylor Greene, Michelle Steel, Beth Van Duyne, and Victoria Spartz.  To these Young Kim was just added, bringing the number to 17 newly elected pro-life members. Remember these names, as they will be the “Joan of Arcs” in the new legislature that begins in January of 2021. Obviously, all the large and small American pro-life organisations worked hard for their election and have congratulated themselves on such an impossible and unexpected result, similar to Trump's, which saw millions of mass media pushing for pro-abortion candidates and yet the American people voted for life.

The Susan B. Anthony List created profiles for each of the newly elected representatives, providing a very good glance at what femininity, youth and determination look like. The election of so many pro-life women will have enormous political weight and consequences. Alarms and concerns about the Biden-Harris administration's huge commitment to abortion have multiplied in recent weeks due to the real danger that not only will all of Trump’s pro-life measures be nullified, but also that the murder of innocent lives will be promoted on a global scale.

The appointment of Ronald Klain (a self-proclaimed "NARAL Army soldier") as Biden’s Chief of Staff, David Kessler (who authorised the general sale of the abortion pill) as Co-Chairman of Biden's anti-Covid task force, and the massive presence of George Soros's men in the Democrats’ 'Transition Team' are clear signs of the direction that Biden intends to take during his first 100 days of office. Did the pope and his associates not know this? Perhaps, in addition to talking about the environment and poverty, a word could have been said about the human dignity of conceived children?

Republican pro-life women will certainly clash with the Democratic Socialists (dubbed 'The Squad' by the American media), that is, the four women of colour who claim to embody minority, progress, socialism and justice. They are Alexandra Ocasio Cortez, Ilhan Omar, Ayanna Pressley, and Rashiba Tlaib. This past weekend there was already a hint of the battles to come when newly elected New York pro-life congresswoman, Nicole Malliotakis, announced  she wanted to organise with her colleagues an "anti-socialist team" to fight the destructive ideas of the 'Democratic Squad'. Many of us, said Malliotakis, "have lived under Cuban and Venezuelan regimes, many have parents and grandparents who fled former communist countries. Socialism is bad, and we want to preserve our freedoms and the freedoms of the market," rather than heed the promises of Bernie Sanders and the cries of Alexandra Ocasio Cortez!

It is true that the Democrats, although reduced, have maintained the majority in the U.S. Congress with at least 219 members. However, the growing polemics between the Democrat and Socialist representatives against moderate party members and against Speaker Nancy Pelosi are indicative of a most chaotic scenario. The halls of Congress might well see divisions and abstentions from within the Democratic ranks. This spells an opportunity for the Republicans, and a double-opportunity for the new group of pro-life women who will be the real protagonists over the coming years.