Terrorist attack in England: the media strive to quell any alarm. Coronavirus: the media stoke a permanent state of fear. This sort of panic by command which works to keep the population at the mercy of Power, can only be resisted by clinging to the One who has already defeated this worldly Power. 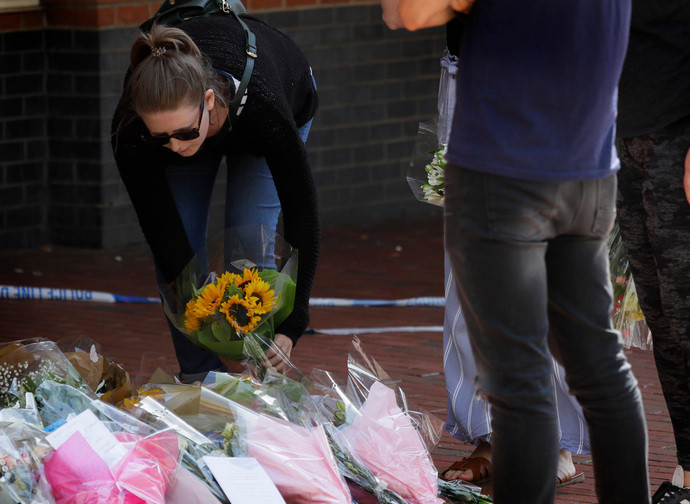 Saturday, June 20, around 7 pm in Reading, England, in a crowded park, a man brandishing a “massive” knife launches his attack first at one group of people, then at another, striking blindly. Finally, he is tackled by a policeman and arrested. Outcome: three dead and three seriously injured. This is immediately “Breaking News”: the public assume it’s an Islamic fundamentalist attack, but the authorities immediately state that there are no elements to indicate that it is an act of terrorism.

Hours pass and the question of who committed the attack and why remains unanswered.  In the meantime, the absence of more details which indicate the motive for the massacre, means mainstream media sites downgrade their reports. Then information leaks out that the killer is of Libyan origin, but woe betide those who might jump to any hasty conclusions: it does not appear – say the sources of information – that he has ties with jihadist groups.

On Sunday, the possibility of a terrorist act is no longer discarded, but it is not until Monday morning that we learn that the man arrested for the attack, the 25-year-old, Khairi Saadallah, “came to the attention of MI5 last year as someone who might travel overseas, possibly for terrorism purposes”.  As the counter terrorism services assessed that he was not an immediate risk,  Saadallah had been put on the list of 40,000 residents in Great Britain suspected of extremist activities but currently not under investigation (3,000 are those continuously monitored).

In the meantime, however, the news has been downgraded in importance, and on Monday night the main article on the BBC website dedicated to the Reading attack focused on the victims, “three true gentlemen”, according to patrons of a nearby pub reserved for LGBT people, of which the three were regular customers.

Thus, a news item that could cause justified alarm was muted and diluted gradually over time. In fact, who can believe that, having arrested the person responsible while committing the act, since he was already known to the anti-terrorism experts, all the information was not available in the first few hours? It was no coincidence that, a few hours after the arrest, the Special Forces raided a block of flats, presumed home of Saadallah (an operation still shrouded in secrecy).

But by now, it is a tried and tested pattern in Europe: when dealing with probable acts of terrorism, official authorities and the media do everything possible to mislead the public by delaying information or even omitting it. The aim is clear: to avoid creating panic, to avoid playing the game of those wanting to sow terror. And at the same time, they are very careful to avoid talking about Islam or Islamism. Heaven forfend one were accused of Islamophobia.

The watchword is: quell, do not create alarm in the population, do not arouse hostile feelings towards a religious community.

On the other hand, if Covid-19 is concerned, the watchword is exactly the opposite: create alarm, keep the population in a constant state of fear, arouse hostile feelings towards those who object to the lockdown and those who want to reduce the perception of the pandemic down to its proper status. And once again, institutional authorities and the media are allies: for days the front pages have been filled with the news about the new Coronavirus alarm in Beijing, then the “disaster” of Brazil (which is not such a disaster), and now the contagions in the German slaughterhouse.

The numbers are limited, but are interpreted as if entire populations are being exterminated by the new plague. All this to keep citizens in a state of fear and to direct anger towards the usual political objectives, the enemies of the New World Order, who  from time to time, and as the case may be, are branded as deniers, sovereigntists, pseudo-scientists and so on.

There is sufficient here to suspect that panic and calm are carefully directed by governments and the media, and that the people are at the mercy of Power. For many, certainly, especially in the media, the logic of conformism works, but it is now obvious that there is a clear intention to impose one perception rather than another on everyone at a global level, which goes far beyond the normal influence applied by the media. Political, economic and ideological objectives are intertwined and exert great pressure on ordinary people. In the case of an emergency anything may be asked of us, and the lockdown has been a clear example of this, perhaps a dress rehearsal.

In order to resist, first of all we need considerable love for the Truth, an open-minded approach to reality that can only survive through the use of reason sustained by faith. The battle is against the Power of this world, and it is impossible to resist to the very end if one is not attached to the One who has already defeated this Power. But this belonging to Christ, in order to be lived, needs a visible communion, which begins with the family and extends to friendships that only in faith have their reason for being. This is why Power opposes the family so strongly and why the logic of “social distancing” is devastating, as it also requires us to be visually isolated (to the point that even in the vast majority of churches families are forced to sit separately to attend Mass).

It is necessary to become aware of what is at stake in order to face what is to come.