Taliban now masters of Afghanistan, a victory for Pakistan

What sort of future awaits Afghanistan after the hasty retreat of Western forces and landslide victory of Taliban militias? The Kabul airport will remain open until Western civilians and a minority of Afghans have been evacuated. The Taliban promise tolerance and non-interference in the territories of their neighbours (China and Russia), but this may be just propaganda. Through its secret services, Pakistan has had the biggest victory by aiding and organising the Taliban offensive and by infiltrating government troops. It will now aim to exert its control over the forthcoming Afghan Islamic government. 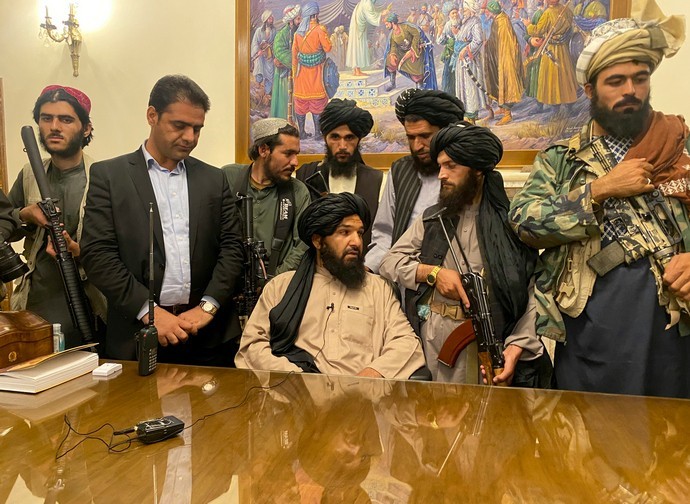 "They won, and now the Taliban will protect Afghans," the former president of Afghanistan, Ashraf Ghani, explained in a message on Facebook. Ghani added that he had fled "to avoid a massacre" that will start with the capital Kabul. He and his wife, his chief of staff and national security adviser have all arrived in Tashkent, the capital of Uzbekistan. Meanwhile, the Taliban flag now flies over the Afghan presidential palace. It is white with the “shahada,” embroidered words in Arabic witnessing God: "I declare that there is no deity other than God. And I declare that Mohammed is the prophet of God".

Afghanistan will revert to the name it had before the Americans arrived in 2001, the Islamic Emirate of Afghanistan. In the meantime, the US military will work to guarantee air traffic at Kabul airport to facilitate evacuations, but only for a few more days until the airlift is completed. In a joint statement, the United States Pentagon and State Department announced measures to secure the Afghan airport in order to "enable the safe exit of US personnel and their allies from Afghanistan, both civilian and military, by air. Over the next 48 hours, we will have expanded our security presence to nearly 6,000 troops, with a mission focused exclusively on facilitating these efforts, and will be in charge of air traffic control" at the airport, the statement said.

Future developments in Afghanistan will, however, depend above all on the decisions that will be made in Pakistan, the long-standing sponsor of the Taliban movement and the real political and military architect of the Taliban 'blitzkrieg' that swept across Afghanistan in a week. In the West there are already those who are looking toward a "moderate shift" of Taliban rule in Kabul, said the spokesman of the Taliban, Sohail Shaheen, in an interview with CNN. However, Shaheen said it was  "premature" to say exactly who will be the new members of the executive political leadership, but added that it will involve "known personalities." "When we speak about an inclusive Afghan Islamic government, it means that other Afghans will be participating in the government," he said. However, it is better not to have any illusions about a possible multi-party governments embedded in semi-democratic representative systems, since the Taliban have announced the proclamation of the Emirate. This  means that there will be a clear head of government (the emir) and his ministers. In all cities "liberated" by Taliban forces, local government authorities have been already dismissed and women have been removed from jobs, including those related to public service,  and have been "invited" to wear burqas.

The Taliban’s willingness to accept the evacuation of tens of thousands of their own compatriots by the American and Western airlifts has two advantages: it removes unwelcome opponents of their Sharia regime and shows the international community that the Taliban movement is no longer bloodthirsty. This is essential if the Emirate of Afghanistan is to gain international recognition and to foster economic and trade relations. The Russians and Chinese are the only ones who have not evacuated their embassies in Kabul, but certainly not because they are friends of the Taliban. For a long time, both Moscow and Beijing had been getting ready for a Taliban takeover of Kabul and, therefore, have maintained relations in an attempt to better negotiate entering into trade agreements with the Taliban (e.g. China has some mining companies operating in Afghanistan). They are now counting on the Taliban's commitment not to fan the flames of jihad in the Chinese region of Sinkiang and in the former Soviet Union's Asian republics (especially in Turkmenistan, Tajikistan and Uzbekistan). Only time will tell just how far Taliban promises can be trusted, since Islamic ideology considers it a virtue to lie to infidels. At any rate, it is already clear who is the real winner of the last chapter of the Afghan war.

Already on Sunday, while the Taliban were peacefully taking over Kabul, Pakistan summoned a high-level delegation of Taliban opponents to Islamabad. This was announced by Pakistan's special representative for Afghanistan, Mohammad Sadiq: "I have just received a high-level delegation including Ulusi Jirga Mir Rehman Rehmani, Salah-ud-din Rabbani, Mohammad Yunus Qanooni, Ustad Mohammad Karim Khalili, Ahmad Zia Massoud, Ahmad Wali Massoud, Abdul Latif Pedram and Khalid Noor" to discuss "matters of mutual interest." Pakistan intends to bring the new Taliban-dominated Afghan government under its direct influence by also offering guarantees to Tajik and Uzbek opponents who have waged a long and proud war against the regime of 'Koranic students' in the past.

For quite some time Islamabad has been planning together with its secret service agency (Inter Services Intelligence - ISI) a military blitz to be waged immediately following completion of the U.S. withdrawal and their allied forces. Islamabad plans to strengthen Taliban militias with its own fighters from elite units and Pakistani Tribal Area militias. With these forces, Taliban attacks have been able to develop on several fronts simultaneously, thereby increasing the perception among government troops of the undisputed superiority over the enemy. Pakistan also reportedly provided the Taliban with extensive intelligence cover, which seems to have involved numerous ISI agents infiltrating Afghan military headquarters and provincial governments with the goal of inducing units to surrender their weapons or not to resist.

From a political and strategic standpoint, the Taliban's lightning fast victory has brought considerable advantages to Pakistan. By controlling Afghanistan, it means on the one hand that it will have very important interlocutor with China and Russia. On the other hand, the Taliban victory has crushed initiatives set up by President Ashraf Ghani with India, which was interested in supporting his government militarily in order to contain the Taliban allied to its Pakistani rival. With the fall of Kabul, the ISI also took its revenge on the United States for the 2011 raid in Abbottabad in which Osama bin Laden was killed by American special forces on Pakistani territory without informing Islamabad intelligence services.