March 26, 2000 – the final day of John Paul II’s Jubilee Pilgrimage to the Holy Land. Everything was ready for his departure to go to the airport. But the Holy Father, who already had Parkinson’s disease, insisted on going to Calvary. There was a long wait, the security services were in turmoil making arrangements while the Holy Father remained immersed in prayer. Finally, Wojtyla returned to the place of the Crucifixion, to unite his sufferings to those of Jesus, and to lead humanity into the Third Millennium with renewed hope. Here for the first time an eyewitness recounts the story of John Paul’s ascent to Golgotha. 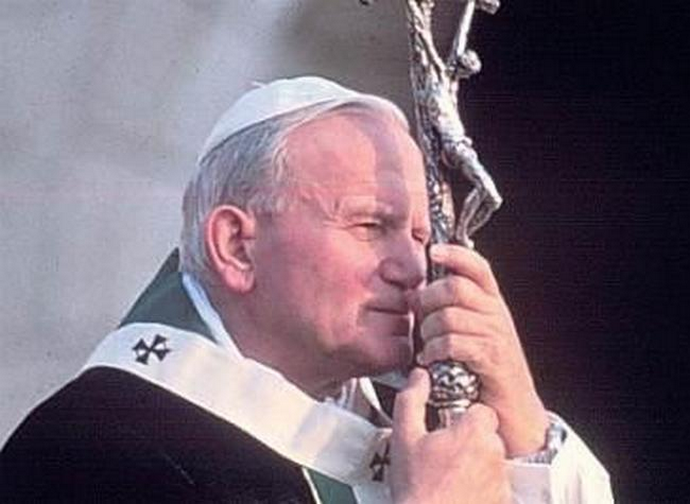 During the last decade of the twentieth century, John Paul II fully understood that the Lord of life and history had entrusted to him the mission of leading Christianity into the Third Millennium. And he understood that this time would unfold with suffering, something that had been revealed to him with the assassination attempt by Ali Agca on May 13, 1981, which he miraculously survived, and that matured a decade later with the onset of Parkinson’s that, slowly but inexorably, paralyzed him and led to his death on April 2, 2005.

Someone who was an eyewitness that day would like to relate how John Paul wanted to accompany the passage of humanity from the the second to the third millennium by adoring the suffering and death of Jesus, Our Lord, in His City of Jerusalem. I have been a chronicler of John Paul’s witness because of my profession, and also a witness because of my faith, and now this testimony is enriched by other details related by those who were present.

It was March 26, 2000, the final day of John Paul II’s week-long Jubilee pilgrimage to Jordan, the Palestinian Territories, and Israel. Those were “feverish” days of my service in Israel, where I lived for several years as a guest of the Latin Patriarch Michel Sabbah due to my work as the co-director of the Annales of the Order of the Holy Sepulchre in Jerusalem and also the director of the temporary editing office for Vatican Radio, made up of a dozen religious who spoke various languages.

The pilgrimage concluded right at the Patriarchate with an official luncheon in the huge refectory, which was so large that it also housed the official portraits of all of the deceased Latin Patriarchs of Jerusalem since the time of its reconstitution in 1847. The wall also bore the fresco of the Last Supper by Ferdinando Michelini. At the luncheon, I sat at the table immediately to the left of the Holy Father, and from that vantage point I was able to note what appeared relevant to the eyes of a journalist.

After lunch, I left my place to go to the courtyard of the Patriarchal Palace, and when I got there, there was John Paul II right in the center of the courtyard seated on top of the “Popemobile” in which up until just a few hours earlier he had traversed the steep and narrow streets of the “Old City” of Jerusalem. Just before lunch he had ridden to the Patriarchate from the Basilica of the Holy Sepulchre where he had presided at the celebration of the Eucharist right in front of the edifice that houses the Tomb of the Risen Lord. In his homily that morning, he had given a strong ecumenical message. It was an unforgettable ceremony, which was concelebrated by Catholic bishops of various rites.

Standing just a few feet away from the Holy Father, I waited for him to leave for the airport in accord with his official schedule. I took the happily unexpected opportunity to stand next to him and began to “speak to him in silence,” above all to express gratitude for being put in such a situation, emotionally sharing in the suffering of his disease that I grasped from looking at his face, my own prayer intertwined with his. It was evident that he was immersed in unceasing prayer. There was a protracted wait, and I continued looked at him attentively, wondering how he might react. But he was not upset.

When I realized that the wait had lasted well over half an hour, I tried hard to understand what was going on, and why the Pope had been left alone, sitting in the Popemobile, in that situation...
Then I discovered that he had decided not to leave Jerusalem for the airport in Tel Avivi: he did not want to return to Rome without first going one more time to the Basilica of the Holy Sepulchre. Or, better said, without first going to Calvary.

Today I have found out more about the story from an eyewitness, Monsignor Giacinto Boulos Marcuzzo, who was at the time a bishop residing in Nazareth and today is the Vicar General of the Latin Patriarchate of Jerusalem. The request was made during lunch. The Pope expressed to Patriarch Michel Sabbah, who was sitting next to him, his desire to return to pray at Golgotha.

It was the only place on his entire pilgrimage that he could not go to because of the difficulty presented by the steep and narrow stairways to someone like him with Parkinson’s. “I remember,” Msgr. Marcuzzo told me, “that the organizers of the pilgrimage, including the Vatican staff, had said, ‘Fortunately both Golgotha and the Holy Sepulchre are in the same Basilica, and so if the Pope goes to the Holy Sepulchre, we can reasonably say that he also went to Golgotha, and thus spare him a needless effort [to climb the stairs] that would frankly also be impossible!’ But the Pope did not see it that way.”

But now there was also another impossibility to overcome: the Israeli police had completely dismantled the security apparatus and restored free movement along the steep alleys of the Old City between the Basilica of the Holy Sepulchre and the Patriarchate. To set it all up again, the barricades and checkpoints, redeploying personnel and equipment that had already returned to their bases, seemed an improbable task. Msgr. Marcuzzo remembers “quite clearly the details of the change in the program that were worked out in the Patriarchate, the conversation between the Pope, the Patriarch and the Police! The long wait in the courtyard of the Patriarchate!”

But for me, this wait turned out to be an unexpected and memorable opportunity: I remained standing and waiting right next to the Holy Father for an hour and a half! He had asked to be brought back to the “Popemobile” so that he could be ready to return to the Basilica and ascend Golgotha.
The efficient organization of the Israeli security forces should be noted for having done everything possible to accomodate their illustrious guest. Msgr. Marcuzzo continues: “I could not go to to Golgotha, because we had to be ready at the airport for the official departure. But a Franciscan of the Holy Sepulchre, who was personally present, told me exactly ‘how’ the Pope has been able to climb the steps of Calvary, to accomplish a feat that seemed impossible to everyone.”  A feat that today is being disclosed for the first time. I would like to be clear: he did not climb the stairway that is on the right of the entrance into the Basilica, the one that pilgrims usually use that is parallel to the external staircase used for group photos.”

Instead, “he went straight up the ‘liturgical ascent’ on the north side, with its very straight and steep steps. And he wanted to do it alone, accompanied only by his secretary (Bishop Stanislaw Dziwisz) who stood slightly away from him behind him. He climbed the entire staircase almost entirely by himself, stopping and resting briefly after each step, with one hand on the handrail on the right and the other one on the handrail on his left (or else, for a few steps, on the hand of his secretary who accompanied him).”

“Those who were present say that it was not only a moving sight, but impressive, upsetting, and even tragic,” Msgr. Marcuzzo says. “It made a few people present think of the way Jesus climbed Calvary carrying the Cross, and how the Pope was carrying the Crosses of the world, with Jesus, across the threshold of the new millennium. Only in the light of this “prophetic” concept can one understand the “holy stubbornness” of the saint, Pope John Paul II, in wanting to go to Golgotha, whatever the personal cost, despite the numerous obstacles (his health, the police, security, official protocol, etc.).

“It was a prophetic sign and a sign of great hope for us today,” Msgr. Marcuzzo concludes. “The sufferings of our time, the third millennium, have already been carried to the feet of the Cross of Christ, washed in His redeeming Blood, and transformed by the mysterious regenerating power of the Resurrection.”

It is a testimony that confirms what I thought then: John Paul wanted to adore the sufferings and the death of the Savior, he wanted to carry his personal suffering before the Cross, and he wanted to go to Jerusalem accompanying all of Christianity as it entered the third millennium, even in the midst of so many sufferings.

But by this same act of adoration John Paul II reaffirmed – and he could not fail to do so – the salvific value of suffering and the defeat of death, because precisely that same place is always and forever a witness to the duel that saw life emerge victorious.