Catholic Social Doctrine is a veritable antidote to the ideologies currently dominating economic policies. This is also true in terms of how the Covid pandemic has been handled, giving rise to both a new form of centralised government and an "open society". It is true also in terms of the ecological movement, which has now become a new religion and the cause of injustices harming the poor. It also holds true for economic "degrowth" which smacks of dangerous utopian ideals and reminiscent of centuries-old heresies involving pauperism. Finally, Catholic Social Doctrine is an antidote to globalism, a distortion of true fraternity. Below, we publish some the main points from Archbishop Giampaolo Crepaldi's talk given at the third annual Catholic Social Doctrine conference in Lonigo (Northern Italy). 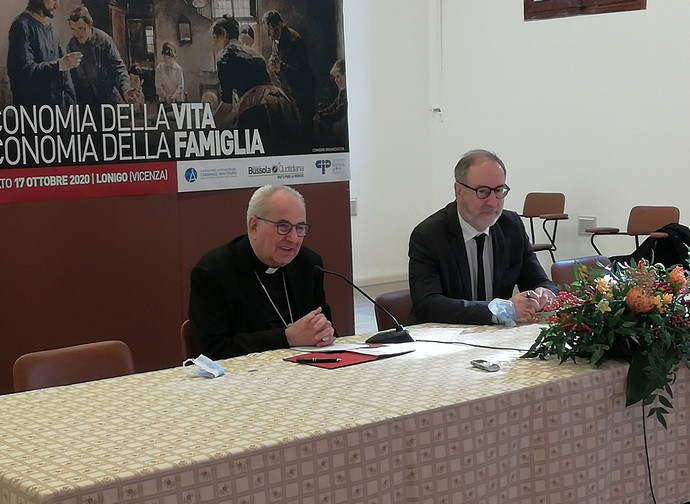 Below are extensive excerpts from Archbishop Giampaolo Crepaldi keynote lecture delivered last October 17 for third annual Catholic Social Doctrine conference in Lonigo, in the Italian region of Veneto. The conference was organised by the Cardinal Van Thuan International Observatory, the Daily Compass and the Iustitia et Pax National Association.

(...) Catholic Social Doctrine is opposed, by its very nature, to ideology because its aim is realism. Ideology is always an instrumental way of obscuring reality.  (…)

(…). Catholic Social Doctrine is based on realism and maintains that truth is not ideological. On the contrary, truth frees us from ideologies precisely because truth is received and not man-made. The truth sets us free. Ideology is always an illusion, while the Church's Social Doctrine is never so. Catholic Social Teaching educates human intelligence and hearts in a spirit of reality. It educates us to seek right reason, to form a conscientious and reasonable faith, to seek true development, and to trust in human resources and in the person as a resource.

COVID PANDEMIC
(...) There is no doubt that the current Covid-19 pandemic has had and will continue having important repercussions on our economies. Amid the flurry of information we receive about the pandemic, two aspects are certain. The first is that the impact on the real economy in businesses and households will be very serious. Currently, the real effects are delayed by artificial means, but this cannot last for long. The second regards the many centres of political and financial power attempting to use the pandemic to restructure the world economy in ways we should find disturbing. Currently, our economies, therefore, have fallen prey to ideologies and the pandemic itself is being managed ideologically. (…)

Economies depend on a particular moral system. John Paul II taught us that an economic collapse never has merely economic causes. 'Human' entrepreneurship precedes 'economic' entrepreneurship, as [Benedict XVI’s] Caritas in Veritate reminds us. Economies become dependent on ideologies when ignoring this [axiom]. The Church's Social Doctrine saves economics from ideologies when it teaches this.

At this point in time it [Catholic Social Doctrine] has hardly been utilised and recommended. Salvation has often been reduced to health and the common good to the application of government regulations. In this way, our economies have yielded to ideologies. (…)

PRIVATE PROPERTY
Among the fundamental principles of Catholic Social Teaching is the natural right to private property (...). Foreseeing potential deviations from this right, Leo XIII had suggested that property should be considered as personal in terms of ownership, but as common in terms of its use. This distinction arises from a moral order and is proper to the human person and his creativity. Moreover, it must be used according to social order, by way of families, first of all, and then by other intermediate entities.

STATISM AND THE OPEN SOCIETY
I make these observations not to celebrate the individualistic exasperation of private property, but because I have the impression that the current ideological handling of the pandemic aims to reduce this principle through two seemingly opposing but now combined trends. The first is the revival of statist centralism. The weakness of the population, the often induced social alarm, and isolation together fuel a need for protection that statism offers in unexpected circumstances. (…)

The other tendency, apparently different, is the impulse the pandemic has given to the so-called "open society." This means a greater global unification, the creation of strong supranational powers, a post-religious crossbreeding of cultures, a universal "obedience" in our lifestyles, and the acceptance of an artificially produced hierarchy of values. (…)

GLOBALISM
Catholic Social Doctrine has always taught the principle of the unity among the human race, a unity of origin and destiny. This principle, however, must not be confused with the main globalist objectives set forth on the world stage today. We should not tolerate any misunderstandings on this issue. If we follow today’s prevalent ideologies, we end up contributing to creating mistaken and painful solutions. Neither can we be content with nominalistic fine-tuning of today's cultural agenda. The word ‘brotherhood’ today takes on a host of diverse meanings to which we must pay close attention.

According to the Church's Social Doctrine human fraternity or brotherhood is defended on two levels. The first level is of a natural order: we are brothers because we are all men; we are equal in dignity, we tread the same ground, we live together not for reasons of fact but because we are called to do so. This natural level also gives us the rules of our fraternity, that is, the natural law and natural moral law, which allow ontological brotherhood to become moral brotherhood. The Ten Commandments are about a law of fraternity and brotherhood. In fact, they are perfectly valid in all corners of the earth.

The other level is supernatural: we are brothers because we are children of God,  the same children of one Father. The natural level is about civic and ethical brotherhood, while the supernatural level is the basis for a religious and salvific brotherhood. These two planes are in continuity with each other, because nature refers to the Creator and the supernatural to our Saviour, who are one and the same God. It does not appear to me that there are other types of brotherhood worthy of this name other than these two.

ECOLOGISM
(...) Today's ecologism, if applied according to ideologies which tend to dominate it, is the cause of injustice harming the poor. More resources are spent on dogs than on children; on researching the healthiness of our air than on defending life; on teaching new generations to respect the environment rather than having children. In Caritas in Veritate, Benedict XVI made it quite clear that this is fundamental flaw of our culture, which redirects the economy from its true goals. Enormous sums are spent on defending nature rather than on defending man. The ideology of a dehumanised nature is at play here, but nowadays, it is all about rubble. Just think, for example, of the constant predictions regarding the depletion of energy resources. They neglect the human resource, as if everything was in the hands of matter and nothing in the hands of human intelligence.

The main economic damage of environmentalist ideology consists in inducing diminished birth rates. If we set the economy on a path toward individual and predominantly luxurious consumption, a society without children, without family, made up of asexual or mixed sexuality individuals who work to consume and consume to work, it is certainly attractive to unscrupulous economic actors. But if we look at the real economy, we see that if there is no family and if children are not born, the system in general does not hold up very well.

ANTI-FAMILIALISM AND ANTI-NATALISM
Anti-familialism and anti-natalism are among today's most destructive ideologies. John Paul II had well highlighted the fundamental economic importance of the family which is a school of work, a reason for savings, a social shock absorber during crises, a form of social capital, a means for inculcating civic virtue, and a place for transmitting knowledge and skills between generations. The lack of new children leads an ageing society to not have a vision for the future. It also leads to unproductive costs, dependency on political institutions, and the stagnation of creativity at work. The anti-familist and anti-natalist ideologies want to reshape the human economy in its own image and values, in the end denying both the importance of family and life. Mind you, this not just denials of the natural family and ways of life, but of the Holy Family and supernatural life.  (…)

We might think the question of God has nothing to do with this, but it instead has everything to do with the problem. Moreover, this is why Catholic Social Doctrine is interested in God. If God were an ancillary and marginal issue, and if things could get on well without Him, our social teachings would be certainly useful but not at all indispensable, as we believe them to be. An ideological view of life, of the family, of nature, of the economy is not neutral in terms of religious consequences. (…)

ECONOMIC DEGROWTH
All this is the basis of another ideology widespread today, the ideology of economic degrowth. (...) It does not mean economic prudence, per se, but a halt to the progress and creation of wealth, as if being all poorer were itself a guarantee of justice and peace.

In this sense, degrowth has all the characteristics of a utopia as well as those of an ideology. The various secularism beliefs and heretical pauperisms we have known throughout history express the same concept. The Church, however, has always contested them and even the industriousness of monks has always been orientated toward humanising nature rather than naturalising man. In doing so, monks were driven not only by their love for nature or merely by their love for human nature, but above all by their love for God.

When both political and economic centralisation prevails, we run the risk of understanding equality as a levelling guaranteed by such systems. More or less, every form of state welfare we witnessed in recent decades have made this same mistake. The egalitarian ideology then makes another basic mistake: it believes that social inequalities cause moral inequalities, while just the opposite is true. It is not poverty that produces immorality but, vice versa, immorality that produces poverty. (…)