Over the last century and a half, the Magisterium has honoured the role of St Joseph in salvation history several times, stating what is implicit in Holy Scripture and inherent in the sensus fidei. Not only was Mary's spouse recognised (under Blessed Pius IX) as the Patron of the Church, but his intercession was also described by Pius XI as “omnipotent”. 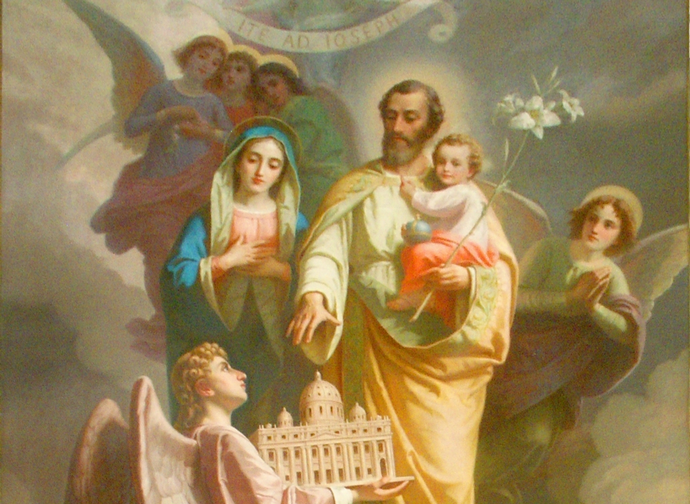 From the solemn proclamation of St Joseph as Patron of the Church to the apostolic letter Patris Corde, 150 years after the decree Quemadmodum Deus, the magisterium has repeatedly honoured the mission of Mary's spouse in the history of salvation. Sometimes with a simple mention, others - as in Quamquam Pluries by Leo XIII, the first encyclical on the virginal father of Jesus, and then in the apostolic exhortation Redemptoris Custos by St John Paul II - with an organic exposition of the virtues and privileges of Joseph.

With specific regard to the patronage of the Church, the link with the role of St Joseph as head of the Holy Family is evident. Blessed Pius IX, in the above-mentioned Quemadmodum Deus published on 8 December 1870 by the Sacred Congregation of Rites, re-proposed the parallelism (already made by St Bernard) with the ancient Joseph, son of Jacob who rose to the position of administrator of all the Pharaoh's goods. And he illustrated succinctly the pre-eminence of the new Joseph, whom God constituted as "Lord and Prince of his house and possessions and elected him Custodian of his greatest treasures", namely Jesus and Mary.

Leo XIII was even more explicit and in the QP he dwelt on the reasons for the patronage, clarifying among other things that "the divine house, which Joseph governed with almost parental authority, was the cradle of the nascent Church". Because of the exceptional dignity bestowed on him, "it follows that the Blessed Patriarch looks upon the multitude of Christians who make up the Church as confided specially to his trust - this limitless family spread over the earth, over which, because he is the spouse of Mary and the Father of Jesus Christ he holds, as it were, a paternal authority. It is, then, natural and worthy that as the Blessed Joseph ministered to all the needs of the family at Nazareth and girt it about with his protection, he should now cover with the cloak of his heavenly patronage and defend the Church of Jesus Christ” (QP).

In the light of these truths, Pius XI was able to teach in 1926 that the title of Patron of the Church actually belonged to Saint Joseph from the beginning of his earthly mission as head of the Holy Family. Here too, in short, as in other circumstances, the magisterium of the popes has gradually defined what is implicit in the Holy Scriptures and consistent with the sensus fidei. One can see that the solemn recognition of the patronage of the Church has been an answer and an anchor of salvation in an era of galloping secularisation (still in progress). The same Quemadmodum Deus, issued close to the Capture of Rome, highlighted the urgency of establishing and entrusting oneself to the very powerful patronage of Saint Joseph, “when in these most troublesome times the Church is beset by enemies on every side and is weighed down by calamities so heavy that ungodly men assert that the gates of hell have at length prevailed against her”. And if this was true in 1870, it is all the more true today, when the Bride of Christ seems to be at the mercy of increasingly overwhelming forces and the Catholic faith, suffocated by secularism, counts for almost nothing in the public sphere.

Rightly, therefore, in the latter part of the 20th century, John Paul II noted that the patronage of Saint Joseph «must be invoked as ever necessary for the Church, not only as a defence against all dangers, but also, and indeed primarily, as an impetus for her renewed commitment to evangelisation in the world and to re-evangelization in those lands and nations where - as I wrote in the Apostolic Exhortation Christifideles Laici - “religion and the Christian life were formerly flourishing and are now put to a hard test”» (cf. RC, 29).

In the entire history of devotion to Saint Joseph we see the invisible but concrete workings of Providence. Saints and hardened sinners, high prelates and simple believers, people of humble origins and sovereigns have all had recourse to his intercession. It is true that there is no shortage of Fathers and Doctors of the Church who have written about him, but the treatment has often been in sporadic bursts. Therefore, a Josephologist such as Father Tarcisio Stramare observed: «Considering the persistent influence of the "raving" apocryphal literature in the presentation of the figure of Saint Joseph and that there has never been an organised action and even less a theological commitment to explain such a wide and persistent development of his devotion and of the "respect" he enjoys among the Christian people, one can consider, as Pius IX stated, that the devotion to Saint Joseph "could only have been given to the faithful in a heavenly way"».

Looking at the extent and power of St Joseph's intercession, one can consider first of all what St Thomas Aquinas teaches, namely that "the saints are in a position to merit for us, or rather to help us because of previous merit, since, while they lived, they merited before God that their prayers be answered after death". The greater the merit achieved on earth, the more effective, clearly, is the intercession of the saint in Heaven: it follows that no creature, except Mary Most Holy, is able to impart graces as much as Saint Joseph, whose patronage extends to all needs. We are reminded of this, among many others, by his most famous devotee, Saint Teresa of Ávila, who in her Life tells of the extraordinary graces - material and spiritual - received for having invoked Saint Joseph, without ever remaining unheeded. Indeed, testifying to how the glorious patriarch always guided her in accordance with God's will, the great reformer of Carmel specifies: "If my request strays a little from the right path, he straightens it for my greater good".

Moreover, the experiences of Teresa of Ávila and countless other saints and devotees received, so to speak, a papal 'seal'. Speaking to a group of married couples on 19 March 1938, Pius XI explained that along with the "almighty intercession" traditionally and rightly acknowledged to the Mother of God, to whom the Son can deny nothing, we must also acknowledge that of Saint Joseph, "the intercession of the spouse, of the putative father, of the head of the household of the family of Nazareth". Pope Ratti continues: "(...) therefore this intercession cannot but be omnipotent, because what can Jesus and Mary deny Saint Joseph, who literally consecrated his whole life to them, and to whom they really owe the means of their earthly existence?".

So let us turn to this sure means of eternal salvation, in the certainty that devotion to Joseph increases love for Mary, which in turn is the most direct route to Jesus. To place ourselves under the protection of the head of the Holy Family, a good way is to recite the prayer - To you, O Blessed Joseph - which Leo XIII left us. It can be said after the Rosary, or even on its own. St Joseph will not fail to assist us "in this struggle against the power of darkness", helping us "to live virtuously, die piously, and attain eternal beatitude in heaven. So be it".

To you, O blessed Joseph,
do we come in our tribulation,
and having implored the help of your most holy Spouse,
we confidently invoke your patronage also.

Through that charity which bound you
to the Immaculate Virgin Mother of God
and through the paternal love
with which you embraced the Child Jesus,
we humbly beg you graciously to regard the inheritance
which Jesus Christ has purchased by his Blood,
and with your power and strength to aid us in our necessities.

O most watchful guardian of the Holy Family,
defend the chosen children of Jesus Christ;
O most loving father, ward off from us
every contagion of error and corrupting influence;
O our most mighty protector, be kind to us
and from heaven assist us in our struggle
with the power of darkness.

As once you rescued the Child Jesus from deadly peril,
so now protect God's Holy Church
from the snares of the enemy and from all adversity;
shield, too, each one of us by your constant protection,
so that, supported by your example and your aid,
we may be able to live piously, to die in holiness,
and to obtain eternal happiness in heaven.