Squid Game: a tsunami of evil with no way out or redemption

Airing on Netflix, Squid Game is a TV series with attention-grabbing ingredients. It’s supposed to be a denunciation of capitalist society, but the level of violence is extremely high and gratuitous (even children and teenagers are viewing it and cases of imitation are already being recorded). In addition, evil overcomes and overwhelms the little good that is present, leaving the viewer shocked. There is no way out, and no hope. 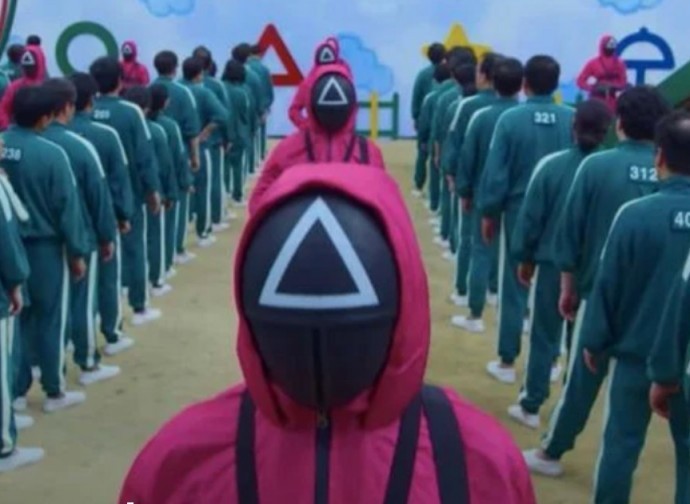 It's called Squid Game and it's a TV series, produced in South Korea, broadcast on the Netflix platform, and it is having an enormous planet-wide success: 111 million views after only 28 days since its launch, making it the TV series with the highest audience on its debut. As of October 2021, it occupied first place in 94 countries. And let's remember that the series is acted in Korean with subtitles.

The series is a winner for several reasons (spoiler alert). First of all, the subject and the script: there is a very simple central idea and the plot is completely linear, so very easy to follow: 456 people, all heavily in debt, are invited to an island to take part in six lethal challenges. Whoever makes it to the end can take home 33 million euros. So, the mechanism that captivates the viewer is as follows: as the challenges unfold, the players become fewer because they die off in the various games. In the last challenge, only two contestants will face each other. For each player who dies, the jackpot rises, reaching 33 million euros. The games in which they will have to compete are those of children: One, two, three, star!, tug-of-war, marbles, etc., including the Squid Game, popular in Korea. This challenge to the death was invented by a bored billionaire who invited other billionaires as spectators and gamblers. Players are not obliged to accept the invitation and if the majority of players decide to stop the challenges, all players can return to their homes.

The creator of the series, Hwang Dong-hyuk, wanted to express a strong social criticism: capitalist society annihilates the individual. It is therefore a hyperbolic representation of certain contemporary social phenomena: careerism and exasperated ambition, competition that leads to the death of the competitor, money as the only god and the only aim in life, social homogenisation, acceptance of the law of the jungle, where the weakest succumb, so that the strongest can win, social control (each competitor is implanted with a microchip without their knowledge and which continues to function even when they have left the island: an evolution of our Covid Green Pass), which leads people to do things they do not want to do (we have also experienced this with compulsory vaccination), the inhumanity of financial power when it is unregulated, the cynicism of interpersonal relationships, the absolute utilitarianism that manages to put a price even on human life and thus the objectification of the person, etc.

These themes influence first of all the costumes, which are very effective: the staff organising the game wear pink jumpsuits (a reference to another successful series: The House of Paper) and then a visor reminiscent of the one used by fencers with a square, circle, and triangle printed on it, which resemble, among other things, some Korean characters, and which identify the guards’ (always armed with a machine gun) hierarchical ranks. The players, on the other hand, wear a green tracksuit (reminiscent of Korean sportswear, the trainingbok, in vogue in the Seventies) with a number, and no name. The meanings are clear: social homogenisation and the anonymity of the person who becomes a mere number in the mass and can be crushed by the strongest.

The chambers are deliberately surreal and alienating: the colours are bright and primary (reminiscent of the colours used in children's rooms or kindergartens), the stairs remind us of Escher's architecture, and the tunnels connecting the various rooms are suggestive of anthills. The bunk beds are reminiscent of the barracks in Nazi or Stalinist concentration camps: by the way, everyone sleeps in the same room.

The soundtracks are either obsessive or deliberately clash with the character of the scene. For instance, we have Joseph Haydn's trumpet concerto being used as a morning wake-up call, Johann Strauss's beautiful Blue Danube used to alert the contestants to the start of a new game. The enchanting Fly Me to the Moon is used as background music to accompany the carnage of the first game. The contrast between opposing elements is also central to the plot itself: innocent children's games are used to kill people, murders performed among other things in play environments.

Finally, there are four other ingredients that certainly contributed to the success of this product: the tone of the script, the texts, the acting, and the logical coherence. As for the tone, it is always tense, spasmodic, and the moments of relaxation are played out in function of a resumption of the narrative climax. The tension is created also and above all by clever twists and turns. The texts are dry, every sentence is essential for the development of the plot, there are no frills. As far as logical coherence is concerned, everything is realistic (within the fantasy premises) and there are no overlaps, logical leaps, or inconsistencies.

All these elements, whether consciously or unconsciously perceived by the spectators, certainly capture their attention. Scenes, costumes, scores, texts, acting, plot, etc. are certainly effective tools for the purpose set by the creator, i.e. they are well designed to make the viewer understand that Squid Game is a metaphor of modern times. However, there are several caveats.

The first one: the rate of violence shown is very high. Plus there are a couple of intensely erotic scenes. Both aspects are gratuitous. Or rather, they are intentional because they both appeal to some of our baser instincts. The bestiality of economic power that crushes the individual could have been well represented even without resorting to dozens and dozens of splatter scenes. Death could just be implied, not always shown. There are so many bloody scenes of this kind that one would think that the real aim is to show raw and bloody sequences, but supported by a compelling plot, otherwise even the most vapid teenagers would be bored after a while. As a side note, though not too marginal: the series is also being watched by kids and children and acts of emulation are starting to be recorded. One, two, three, star! is being played and the loser is slapped in the face.

There is a second caveat that carries even more weight. Squid Game in the end is a long film of denunciation, but it does not indicate how to fight evil (this is a defect of many films and of a large part of 20th century artistic production). There is a diagnosis, but no therapy; there is an analysis of the problems, but no solution. The spectator therefore comes out distraught, annihilated, depressed, disconsolate, hopeless, alienated, anguished, and numb from so much evil that in the end has triumphed over everything and everyone. Therein lies the problem. In the Squid Game it is evil that wins: the wicked are not brought to justice - a detective tries to do so but it doesn’t end well - the participants are forced to commit vile and inhumane acts in order to survive, and in the end they too are killed; the only survivor, a man of good but weak character, has degenerated: he has become wild, enraged, has lost all traces of humanity, and lives hallucinatory days as a tramp despite being a millionaire. He wins but, in reality, he too is defeated, so much so that, on returning home, he finds his mother, who was ill and needed money for treatment, dead in her bed.

It is true that in the series there are many examples of goodness: people who take care of each other, who decide to play together with less able participants, who even give their lives for others (however having first made the mistake of agreeing to take part in this challenge). But they are just a few drops of goodness in an ocean of evil, amply displayed by both the guards and many of the players. The author's critique of torture in the form of a game perpetrated by bored billionaires is unequivocal, it doesn’t give the nod to the bad guys, but it is a critique not as strong and incisive as the feeling of defeat that permeates every frame (there is a germ of hope at the end but it is basically a flower in the desert: a young man trying to help a homeless man). Squid Game is a powerful tsunami of unstoppable cruelty and the viewer can only succumb.

In conclusion, our judgement is negative because in this series the little good that is present - some charitable gestures and the creator's aim of denunciation - is submerged by the evil and above all because no road to salvation, to resurrection, is indicated. Tomorrow is as bleak and leaden as today, and there is no light at the end of the tunnel.