Spain, transformed into an "extermination camp".

“Euthanasia puts an end to all rights.There are no more unavailable goods. What comes next are the laws that favour "transhumanism". This is the hour of the return of the "barbarians" who, drunk with power, do not know how to sustain the common home, the family home that Spain has meant and means. These are times when the Catholic Church cannot look elsewhere: Spain needs Christ, in whom the splendour of the truth of the person shines forth. These are the dramatic words of Bishop Reig Pla after euthanasia became law in Spain on March, 18. The Daily Compass has received permission to publish the text in full. 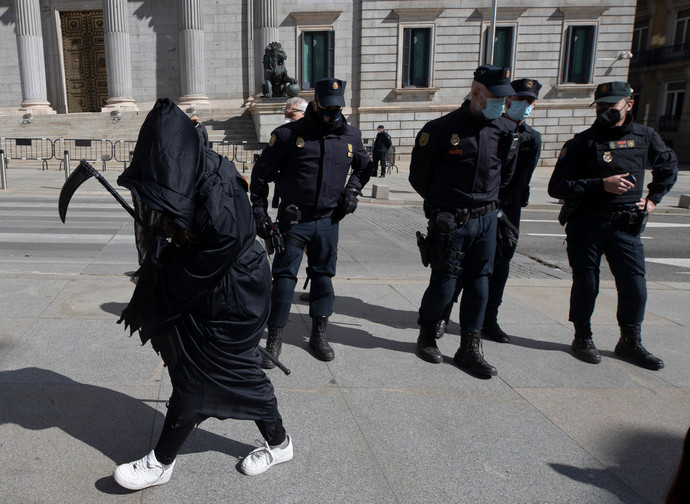 With all due respect and appreciation in the Lord for the people, I must make some considerations regarding certain laws and facts.

They wanted it. Traditionally Catholic Spain, which spread the faith across the seas, was an enemy to be beaten in its own right and because of its repercussions on sister nations in Latin America, the Philippines, the European context itself and the worldwide influence of our missionaries, active collaborators in the transmission of the faith.

As the so-called political transition advanced, and with a Spanish Constitution full of ambiguities, the secularist forces together with the political forces in favour of the cultural, moral and religious relativisation of our people have managed - with the approval of laws that allow the destruction of unborn life, both in the womb and in laboratories, and now with the approval of the law on euthanasia - to turn Spain into an "extermination camp".

The tsunami of laws deregulating Spain's cultural and spiritual heritage, always raising the flag of "freedom", began with the divorce law (1981), followed by the decriminalisation of abortion (1985), the law on assisted reproduction techniques (1988), the law allowing the so-called same-sex civil marriage (2005), the law on "express" divorce and repudiation (2005), the introduction of the subject Education for Citizenship, which introduced gender ideology in schools (2006), the law on assisted reproduction techniques (2006), the Aido law on the interruption of pregnancy and sexual and reproductive health (2010), the law on biomedical research (2011), up to the autonomous laws on "Identity and expression of gender and Social equality and non-discrimination" present in several autonomous communities of the Spanish nation.

In addition to other permissive laws announced by various ministries, the final nail in the coffin for freedom of conscience and the dignity of all human life is the new law on education (2020) and the law on euthanasia (2021). The globalist forces, the financial lobbies, their euthanasia terminals and militant secularism can thus claim victory over a people anaesthetised by the media, the strong social engineering developed with the perversion of language, a Constitutional Court trapped by legal positivism and which leaves what is naturally "specifically human" unprotected: the dignity and sacredness of life, male/female differentiation as a wealth of humanity's heritage, the good of marriage open to life and the social function of the family as pillars that support a stable society with a horizon of fraternity.

With this law, the process of transformation of the "natural law" and the so-called "human rights" into subjective rights, according to one's own wishes, is consummated. There are no more unavailable goods. What comes next are the laws that favour "transhumanism".
It bears repeating once again. There is no right to die. Euthanasia puts an end to all rights. Human life is always a gift that precedes us and that deserves to be cared for personally, familiarly and socially from the perspective of the common good until natural death. It is the highest gift of creation. It is particularly incumbent on the State to guarantee this care and protection. Failure to do so makes it a State that does not fulfil its mission and is illegitimate in the exercise of this power. Doctors and health care workers now take on a new responsibility to resist evil. Clinics, hospitals and homes cannot become places where human life is not respected with safety and care. I pray for them.

Not satisfied with these laws, the new masters in power have provoked a moral weakening of our people, especially among children, adolescents and young people with a sexual education that is not based on love and the capacity for self-government for the personal good and the relationship with other people. Many of them are trapped by pornography, addictions of all kinds and have been inoculated with a negative concept of freedom. It is proposed simply as the radical autonomy of the individual with no other horizon than pleasure and utility, with no reference to the unavailable goods of the person that are cultivated by virtue. It is the destruction of freedom in the name of a freedom with no other content than itself. A perverse freedom that is the source of much human suffering: the destruction of human life, family breakdown, abandonment of children, disorientation in the meaning of life and even an increase in loneliness, mental illness and suicide.

The path is well known: manipulation of language, weakening of the family as the educator of its children, changing customs with social engineering and creating a new mass opinion brought about by the massive invasion of social media that has managed to penetrate the souls and minds of many Spaniards.

All this required a starting point that had been pursued from the outset: to encourage the secularisation of Spanish society in order to dispense with God and the Catholic tradition that underpins an appropriate anthropology that responds to the goods and purposes of the human person, the family, religion and society. Without God, without the humanity of Jesus Christ, man is adrift and loses his stable foundation and a horizon of eternity. That is why dispensing with the Catholic tradition and weakening the culture and laws that can sustain it encourages a nihilistic multiculturalism that ends up being a nonsense that leaves our Spanish society defenceless.
I have said it on several occasions. This is the hour of the return of the "barbarians" who, drunk with power, do not know how to sustain the common home, the family home that Spain has meant and means.

These are times when the Catholic Church cannot look elsewhere. These are times of a "new evangelisation" as the recent Popes are asking us to do. What is at stake is the good of mankind and the good of our people. It is necessary to mobilise the consciences of Catholics and people of good will in order to achieve a great strategy in favour of human life. What is at stake, as St. John Paul II said, is a veritable «structure of sin… a kind of "conspiracy against life… a war of the powerful against the weak» (Evangelium vitae, 12). It is a bitter irony that in this time of "pandemic", instead of taking exquisite care of health and labour needs, the national government should make this assault on the dignity of human life and be indifferent to the suffering of so many people who are crying out for care and protection.

Although non-believers may be unaware of it, Spain needs Christ, in whom the splendour of the truth of the person shines forth. At this time we cannot renounce either to the book of Creation, God the Creator who orders all things and man himself with his wisdom, or to the work of Redemption expressed in the Cross of Christ where we have all been loved to the end. Without this love and forgiveness we cannot live. This has been testified to by all the Saints who, together with the Virgin Mary, populate the whole of Spain.

As it could not be otherwise, our word as Church is always about reconciliation and forgiveness. This is possible because first we have been forgiven by God and, in Christ, sin and death have been conquered. We are in Lent and we are on the way to Easter: the triumph of resurrection and Life. That is why we are called to hope. All the forces of evil are insignificant before the power and mercy of God: "Deus est semper maior".

I conclude by invoking Saint Joseph, custodian of the Holy Family, protector of the Church and advocate of the good death. Under his protection, may Spain walk the path of justice and peace towards heaven, our definitive homeland.