Sister Deidre Byrne (better known as Sister Dede to her patients), is the Religious Superior and former US Military Colonel who did not succumb to the government vaccine mandate. After a long legal battle, she has achieved her first victory. Here is what her responsibility teaches us. 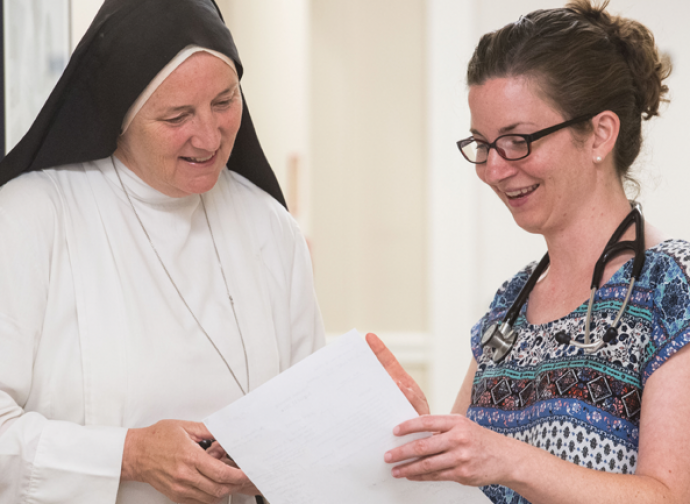 The name Sister Deidre Byrne might not ring a bell for everyone. A detail which may help to refresh memories might be when this nun, member of the Little Workers of The Sacred Hearts of Jesus and Mary, spoke at the 2020 Republican Convention in defense of life, from natural conception to natural death.

Sister Deidre is quite a character: she boasts a double specialisation in family medicine and general surgery, and 29 years of military experience which earned her the title of US Army Colonel. After abandoning the military hierarchy, she assumed the ‘rank’ of Mother Superior of her community in Washington D.C., where she continues to practice her medical profession free of charge, assisting the most impoverished.

Her name appears together with Wanda Półtawska amongst the signatories of the pledge published 8 March, 2021,  The Voice of Woman in Defense of Unborn Babies and in Opposition to Abortion-Tainted Vaccines , which makes a solid, lucid argument against the use of aborted human foetuses in medical research and the preparation of pharmaceuticals and vaccines. Not only did sister Deidre sign her name: she was ready to risk everything, as her story illustrates.

In August 2021, the District of Columbia had deliberated in favour of a Covid-19 vaccine mandate for all medical practitioners and health workers. Defended by Christopher Ferrara, lawyer and member of the Thomas More Society, a no-profit law firm in defense of life, family and religious liberty, Sister Deidre had requested to be exempted for religious reasons, due to the fact that the three available vaccines (Pfizer, Moderna and J&J) took recourse to the use of fetal cell lines derived from aborted babies in their research, experimentation and/or production.

At the beginning of March this year, her request was refused, and Sister Deidre was forced to suspend her medical practice. However, her lawyers responded, suing the District of Columbia (DC), the Mayor, Muriel Bowser, and the Director of the Department of Health, Quandra Nesbitt, for their refusal to concede exemptions for religious motives. In this case, the religious objections are well-founded due to the fact that abortion, as the lawyers explain “is connected to, and supports the experimentation which involves aborted fetal tissues and cell lines derived from them, most recently in reference to the experimental genetic mRNA and DNA injections utilised against Covid-19”.

On 15  March, Sister Deidre finally received a letter from the Department of Health of the District of Columbia, in which it is stated that because of the reduction in Covid-19 cases, her exemption would be respected until 15 March 2023. The letter specifies that “if the Director were to decide that such a decision may not be in the public interest, the conceded exemption may be revoked”. Sister Dede, as she is amicably called, may nevertheless recommence her care of those most in need, but from the contents of the letter, it is clear that the battle is not yet won. Who will decide what is in the “best interest” of public health? Especially considering that “best interest” is an expression which in reality has become a euphemism referring to the suppression of some inalienable human right, such as was the case with little Alfie. The situation remains unclear, at least from a legal perspective. From a moral and religious perspective, Sister Deidre has become a solid point of reference for all individuals who have understood what is at stake with regard to these serums.

In an interview during the transmission of  The World Over  on 10 March, Sister Dede complained of the consequences of the first refusal to concede a religious exemption to her: ”I cannot practice my profession, I have had to close my clinic for a month, I cannot visit my patients. I can no longer help anyone. I can only wait and see what will happen”.

She clearly has no intention of accepting this moral blackmail, although she is lucidly aware that her choice has had painful consequences not just for her, but also for others, especially her patients: “I had no choice but to either choose the vaccine or stop practicing my medical profession in Washington DC. My third option has been to remain firm, because I sense that I represent the sharp point of an arrow comprised of many people who have been forced to do exactly the same thing”.

The ”Third Option”: is that option which souls living in the presence of God can discover, when they find themselves in a dilemma; a dilemma caused by an unjustified constraint placed upon them by a political power. The “Third Option” is that option which emerges when one is faced with the harsh consequences of one’s personal choice and does not accept retreat, because it is understood that that which is of great worth comes at great cost. And He is worth everything, and demands all.

Sister Dede demonstrates a different mentality from that which is manifested by our impoverished reasoning, in which one remains faithful to the God of Life and to the innocents who bear His image, but only until this does not demand of us the dramatic possibility of losing our health, our work, our dearest relationships, even life itself. She demonstrates a logic which does not shy away from her responsibility towards her neighbour; a responsibility that Sister Colonel exercises fully, as she understands that any concession would drag numerous others in the same situation along with her. Responsibility towards one’s neighbour, in the end, signifies concretely refusing – even if it means personally paying a price – to accept a system which makes producers of biological material out of the bodies of little undefended babies.

Sister Dede is more aware than ever, and for this reason, during that same interview, she made a plea: “People need to become more aware” of the connection between these vaccines and the fetal cell lines derived from abortions. From her conscience, accustomed to being in the Presence of God, the Sister perceived the insistent imperative: “I felt that God was calling me to be a voice for life, for unborn babies, and I wanted to remain firm upon that point . . .As Catholics, we must sustain and defend the unborn, from the moment of conception to natural death”. Some might consider this a “special calling” exclusively for her. But it is not so. The voice she heard is the voice of God, and God does not change or contradict Himself. Sister Dede heard His voice because she did not suffocate it with worries about what might happen, but rather she permitted it to emerge as it is, with all of the expectation which it implies, without hesitating before the price which must be paid.