Sir David Amess, the British MP killed by an Islamic terrorist, was a practicing Catholic and defender of non-negotiable principles. He was denied the last rites, when a local priest was barred by the police from entering the crime scene. But, the proposal of an amendment to the Police, Crime, Sentencing and Courts Bill would allow the last sacrament to be administered also in these cases. If the proposal becomes law, then even after his death, David will have achieved something good for British Catholics. Msgr. Kevin Hale, his friend and pastor shares his memories and concerns for the Catholic community. 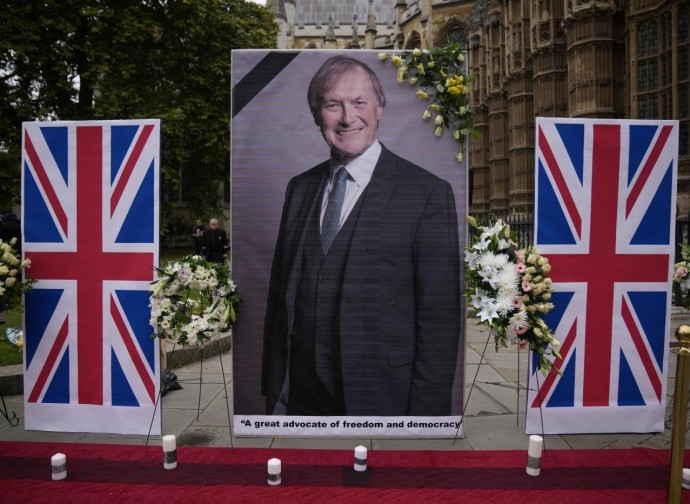 Leigh-on-the-Sea in Essex, is a seaside town of 20,000 inhabitants and a 45 minute train ride from London. This is where Sir David Amess, a devout Catholic and Conservative Member of Parliament (MP) since 1983, was assassinated in a Methodist church, while meeting with constituents from the local Southend West college. Ali Harbi Ali, a 25-year-old British national of Somali heritage, son of a former communications director of the government of Mogadishu, stabbed him seventeen times to kill him. The alleged murderer is currently detained under the Terrorism Act 2000. He had already been referred to the extremism program Prevent as being at risk of radicalisation. British investigators, therefore, are inquiring into a crime linked to Islamic extremism. Meanwhile, the community of Leigh-on-the-Sea is still in shock over the barbaric killing of a much-loved parliamentarian. Monsignor Kevin Hale, pastor of the Catholic church of 'Our Lady of Lourdes and St Joseph's' in the town of Essex, spoke to the Daily Compass about his memories and friendship with David Amess.

How well did you know Sir David Amess?
David Amess often attended Mass in my church. Apart from being a good man, I have always considered him a friend of mine and of the parish where he never missed important celebrations. His son also served at Mass here. And as a parliamentarian, when a problem arose in our Catholic school, he immediately set to work to put us in contact with the appropriate ministerial offices to find a solution.

Did he keep close links with the Catholic community in his constituency?
Two years ago he invited me and the Bishop of Brentwood to Westminster to celebrate mass in the House of Commons’ chapel. After nearly 40 years of service, Parliament was a particularly dear place to him: not surprisingly, he got married and had his children baptised there.

How did he live his Catholic faith?
He had a very strong faith, partly due to the solid education he received at a Catholic school in London where I also studied. He was a defender of life in all its forms. In Parliament, when there was a discussion on issues such as abortion or assisted suicide, he spoke up and was unwilling to compromise. It cannot be ruled out that this frankness jeopardised the assumption of government roles. In a certain sense it could be said that his faith impeded him from 'making a career'. But that’s who he was: a good Catholic and an exceptional man.

In the aftermath of the Paris attacks in November 2015, he wrote an article in which he urged everyone not to blame all Muslims or all migrants, instead he said that "in the face of Islamic extremism it is not enough to speak quietly and rationally, but to call a spade a spade".
He took a firm position against extremism and defended the many good people of Islamic faith. There are a number of Muslims in our area and he was on excellent terms with them. He was a man open to other faiths, but not in a syncretistic sense: he was a supporter of genuine dialogue.

Do you think the idea that the attacker targeted him because he was a Christian and Catholic can be ruled out?
At the moment, according to media reports, it seems that the attack was not specifically aimed at him. But, the fact that the alleged murderer traveled from London and registered to attend an election meeting here in Leigh-on-the-Sea organised precisely by David Amess, is food for thought.

Is it true that the Catholic priest who arrived at the crime scene was stopped from administering the last rites to Sir Amess?
Yes. As news of the attack broke, Don Jeffrey Woolnough rushed to the Belfairs Methodist Church, introduced himself and asked the police if he could administer the last sacrament to David. But they turned him away because he was not allowed to enter the crime scene. That meant he was forced to pray outside. It’s a scandal! But, a few days ago, Fr Jeffrey  me a message saying that Labor MP, Mike Kane, has presented an amendment to the House of Commons to allow priests to enter crime scenes and nursing homes to administer the extreme unction to dying Catholics. A priest, it must not be forgotten, carries out an emergency service and the possibility of receiving the sacraments in the last moments of life is a human right that cannot be denied to the faithful. If this proposal becomes law, it will mean that even after his death, David will have achieved something good for British Catholics.

Does the assassination of Sir Amess make you feel in danger as a Catholic parish priest?
I can't deny I am worried. For example, two weeks ago, while I was celebrating Mass, a shirtless man walked into the church and started screaming that he was a Russian soldier who had come to kill me. Someone called the police but they didn't intervene.

Why not?
I presume it was because it was just a Catholic church, therefore not such a big deal. When the man broke in, I didn't feel in immediate danger because there were people in the church, but what if he had come at another time? The truth is, we are vulnerable. This is Leigh-on-the-Sea not the centre of London or Rome. Yet, what happened to David here is proof it can happen anywhere.

Was he afraid too?
No, David was fearless. In fact, he never accepted special security measures for his protection because he loved being accessible to everyone.

What is your favourite memory of your friendship?
Every Christmas he knocked on my door with a bottle of whiskey and a box of chocolates. I will miss his sense of humour, he was a person with a strong sense of British humour. In general, I will miss the way he did everything with dedication: he loved life, family and education and defended them in the institutions. In these days of interviews, many ask me where his interest in the defence of animals came from. It was from his Catholic faith! St. Francis taught that the entire work of God’s creation was to be loved. His battles for the protection of animals also stemmed from him being pro-life. He defended life in all its forms.