The Gospels give us very little information about the hidden years of Jesus. Among them is the mystery of the Discovery with the doctors in the temple and his subsequent return home with Mary and Joseph. An episode that Simone Martini painted in an original way. 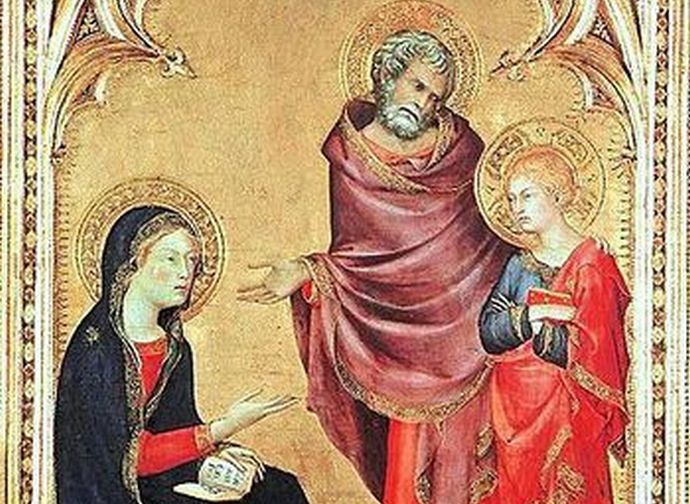 From the moment of his birth and during his earliest childhood, Jesus has inspired many painters, sculptors, engravers, poets and writers: the Annunciation, the Nativity, the Presentation in the Temple and the Flight into Egypt are depicted in hundreds of works of art throughout the centuries. On the other hand, the historical aspects of Jesus' childhood and adolescence have remained largely marginal, not only in art, but also in the Gospels themselves. These years are often referred to (in a non-academic way) as the lost years of Jesus (also called the silent years), the unknown years, the missing years, or the dark years...

And so the question naturally arises: where and how did Jesus live, where did he study, what did he do until the age of 30, when he began his public life? In light of the discovery of the Dead Sea Scrolls and their authenticity and authority, various historians and theologians, starting with Benedict XVI ("L'infanzia di Gesù", 2013, Rizzoli) [Jesus of Nazareth: The Infancy Narratives, 2012, Image Books] hypothesise that Jesus (Yehoshua) spent most of the "unknown" 18 years of his life with the Essenes, where he studied to become a rabbi.

Benedict XVI, who came to this very important deduction through reading the aforementioned Scrolls (150 B.C. - 70 A.D.), discovered in 1947, writes: "It seems that John the Baptist, but perhaps also Jesus and his family, were close to the Essenian Community". In addition to Pope Ratzinger, other important authors claim that the Jew Rabbi Yehoshua ben Yosef (Joshua son of Joseph), better known as Jesus of Nazareth, was indeed part of the Jewish Essenes. The French scholar André Dupont-Sommer (1900-1983) dedicated a good part of his life to the study of the Dead Sea manuscripts and in his important work Les Écrits esséniens découverts près de la Mer Morte he writes: "The Qumran documents clearly reveal that the early Christian Church has its roots, in a way that no one could have imagined, in the Jewish sect of the Essenes and that a good part of its organisation, its rites, its doctrines and its mystical and moral ideal derive from it".

The Catholic theologian and Old Testament scholar Simone Paganini also writes: "The cultural backgrounds of the New Testament (the Gospels) and of the Dead Sea Scrolls were almost identical". Having established this, is it normal to ask ourselves what was the everyday life of the infant Jesus during his childhood and adolescent years? We find vague answers in the Gospels, from which we can deduce that Jesus' family belonged to the middle class and that they were relatively well off: Matthew explains that the family in which Jesus grew up was a real clan, made up of various relatives (among whom we find Zechariah, priest and father of John the Baptist). Mark, on the other hand, dwells on Jesus' occupation as a teenager. In his Gospel (6:3), Mark tells us that Jesus was a "tektón", a Greek term widely used at the time to define the craft of an artisan and, in particular, a "carpenter" (builder of roofs, furniture and boats).

Luke, on the other hand, tells us about an unusual adolescent who amazed those who met him with his intelligence and wit. "His parents went to Jerusalem every year for the feast of Passover. When he was twelve years old, they went up again according to custom; but when the days of the feast were over, and they were on their way home, the young boy Jesus remained in Jerusalem, without his parents noticing. Believing him to be in the caravan, they made a day's journey, and then set out to seek him among their relatives and acquaintances; not finding him, they returned in search of him to Jerusalem. After three days they found him in the temple, sitting in the midst of the teachers, listening to them and questioning them. And all who heard him were astonished at his intelligence and his answers. And when they saw him, they were astonished, and his mother said to him, “Son, why have you treated us so? Behold, your father and I have been searching for you in great distress”. And he answered: "Why did you seek me? Did you not know that I must attend to my Father's affairs?". But they did not understand his words. So he left with them and returned to Nazareth and was submissive to them. His mother kept all these things in her heart. And Jesus increased in wisdom and stature, and in favour with God and men”. (Luke 2, 41-52) 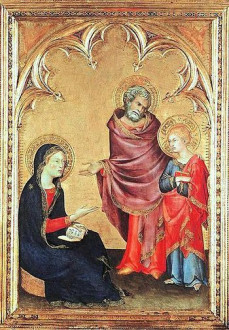 And let us start from this Gospel to mention one of the most singular paintings in the history of art: The Return of Jesus to Bethlehem after the Dispute with the Doctors, a tempera on panel painted in 1342 by Simone Martini. The work was executed in Avignon, France, where the papal court had been transferred from Rome in 1309, and where it remained until 1377, under the powerful and conditioning influence of the transalpine monarchy. This painting was presumably commissioned from Simone Martini for private devotion by a high prelate or perhaps by the pontiff himself. In the painting there is an inscription, in Latin, placed along the lower edge of the frame, where one can read the date of the work and the signature: 'Simone di Siena mi ha dipinto nell'anno di Nostro Signore 1342'. In addition, another Latin inscription is found on the book that Mary holds in her hand, which reads: "Fili, quid fecisti nobis sic?" (Son, why hast thou done so to us?).

The medium-sized painting (49 x 35 cm) is in Great Britain, in Liverpool, at the Walker Art Gallery. It is a truly singular work, because it focuses on the emotionality and intimacy of the Holy Family, something out of the ordinary and something that no other artist has ever dealt with. The painting, with its very interesting combination of ancient and modern elements and its extraordinary quality, is a true masterpiece, full of grace.

Simone Martini in this painting presents a unique and original subject in all Christian iconography: in fact, the artist is not interested in the dispute with the doctors of the Temple, but portrays the three protagonists of the Holy Family, highlighting their reactions following the finding of Jesus, after three days of anguished search by Mary and Joseph. This unusual choice shifts the scene to the more intimate side of family relationships. The painter takes us into the mystery of Jesus' growth, as recounted in the Gospel, and presents new aspects of it with an excellent capacity for psychological introspection of the characters. Looking at the painting, we seem to be participating in a normal scene of family conflict: two parents, relieved to have found the son they thought they had lost and who are trying to make Him understand it; and an adolescent in apparent rebellion who will not listen to reason. Those who contemplate the work, which deals with a mystery rich in meaning, cannot but recognise the real humanity assumed by the Son of God in the event of the Incarnation. 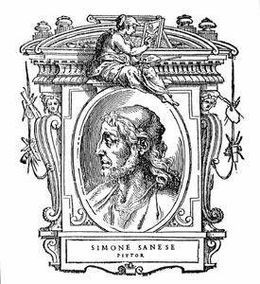 Simone Martini, sometimes also known as Simone Senese, was born in 1284 in Siena and died in Avignon in 1344. He was a Sienese painter and miniaturist, a contemporary of Ambrogio Lorenzetti and a pupil of Duccio, who used the techniques of fresco and tempera on panel. His work exerted a considerable influence on international Gothic art. Considered one of the masters of the Sienese school and certainly one of the greatest and most influential artists of the 14th century in Italy, he is the only one able to compete with Giotto. His training probably took place in the workshop of Duccio di Buoninsegna.

Martini's first dated work, recognised by many as his masterpiece, is the great fresco of the Maestà, painted in 1312-1315 for the Sala del Consiglio in Siena's Palazzo Pubblico where it still hangs today, and which he himself restored in 1321 because the work was already severely damaged by damp. In July 1317, Simone was called to Naples by Robert of Anjou, who knighted him and granted him an annual pension. He also commissioned him to paint Saint Louis of Toulouse Crowning His Brother Robert of Anjou, now in the Capodimonte Museum in Naples.

An itinerant painter of genius, Martini moved from Siena to Naples, from Assisi to Orvieto, finally arriving in Avignon, where he died in 1344. Although Simone Martini is commonly considered a secular painter, this writer believes that he was a man of great faith, judging by the beauty and sensitivity with which he humanises the divine figures, in a courteous and respectful attempt to bring them closer to us. And he succeeds.