Seventy years of NATO, more a funeral than a birthday

The NATO summit in London last week, which was supposed to be a celebration of the 70th birthday of the Atlantic Alliance, instead brought to light the profound split between its different members, above all between the United States and Europe, which obviously have very different interests. In addition, NATO is paying the price of never having reckoned with its defeat in Afghanistan against the Taliban, disguised as a retreat of combat forces completed in 2014. 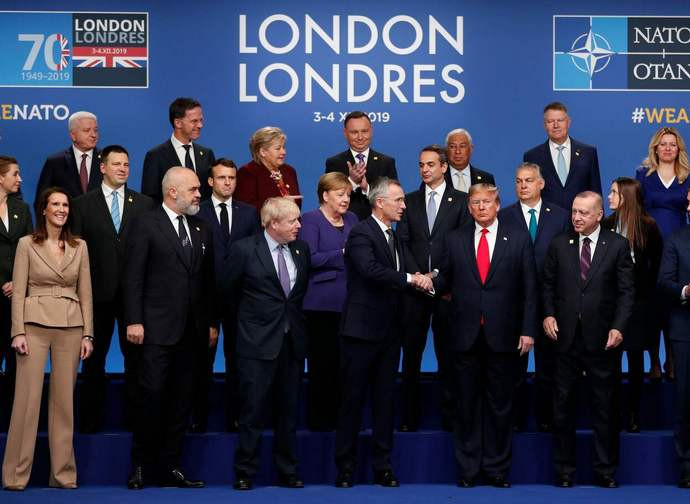 It was supposed to be a 70th birthday party. Instead, it seemed like a funeral that moreover ended in a farce. The profound differences between the member nations prevented any expectation of great things from the NATO Summit which took place in London last week, but at the very least it was legitimate to expect a framework of rigor and seriousness. Such attitudes are more than to be expected for a political and military organization that guaranteed the peace in Europe, preventing its member states from being invaded or involved in conflicts on their own territory.

Instead, the climate of the summit was polemical and farcical, with the duel between Donald Trump and Emmanuel Macron; and then with the jokes and laughs behind Trump’s back by Canadian Prime Minister Justin Trudeau and other European leaders.
The American President certainly did nothing to help calm the heated tones: he demonstrated, despite having said the opposite, that European allies are important to him only if they open their doors to the big companies in the internet and to American social media without making them pay taxes, or buy goods and weapons from the United States.

It is therefore difficult to blame Macron, who declared that NATO was “brain dead,” and asked for greater coherence in the alliance, from a more concrete commitment in the Sahel to guarantees for the Kurds of Syria, our allies against the Islamic State who are threatened by Ankara. Requests to which Trump responded by threatening sanctions if taxes are imposed on the major American Internet companies.
Macron said that he had noted “an evident and unacceptable disconnection” in the last two NATO summits, “dedicated entirely to seeking to understand how to alleviate the financial burden of the United States” and leaving strategic questions for Europe unanswered, among them “relations with Russia and the situation in Turkey.”

Certainly an alliance cannot be held together only by talking about money, more specifically of the money that the US wants Europe to spend additionally on defense, but without ever discussing shared objectives.
Among other things, the Secretary General, Jens Stoltenberg, noted that Europe and Canada increased their military spending by 4.6%, thereby growing for the fifth consecutive year, with a total increase of 130 billion dollars for the five-year period 2016-2020. Moreover, thanks to these increases the number of NATO nations that spend the expected 2% of their GDP on defense jumped to nine. Such data is relevant but insufficient for Trump, who in reality would like to see this money spent on products made in the US, certainly not in Europe.

Defense spending aside, in London they argued about truly everything. A total clash between Macron and Erdogan (backed by the US) on Syria and on who are the true “terrorists”: the militants of the Islamic State according to France, the Kurds according to Turkey. Right on schedule, the umpteenth blackmail of Erdogan: either the allies recognize the Turkish war against the terrorist Kurds or Ankara will oppose NATO’s plans and programs for “collective defense” in support of Poland and the Baltic countries against the “Russian threat.” A paradoxical blackmail if one considers that Turkey already has one foot out of NATO and with the other is stepping into a specific strategic agreement with Moscow, after acquiring the long-range Russian S-400 air defense system, which cost Ankara the censure of Washington and the cancellation of the delivery of 100 F-35 bombers.
Paradoxical also because the one power that permitted the Syrian Kurds to survive by stopping the Turkish advance was Russia, that the USA and some Eastern NATO partners would like we still consider as an enemy, saying that it should be slapped with harmful economic sanctions that would only hurt Europeans; and saying that NATO ought to augment its military expansion against it.

It is inevitable that NATO will continue to weaken and lose its cohesiveness on the theme of the “Russian threat,” especially now that the increase in military spending is leading the Atlantic Alliance to spend for defense at least 15 times more than Moscow. The impression is that in order to justify its existence, NATO must continue to identify an “enemy” powerful enough to legitimize the drive to strengthen military spending. And if the Russian enemy objectively does not spend enough to justify such a “build up” of Western military spending, in London NATO officially defined the existence of the “Chinese enemy.”

It is unfortunate that, while in Asia the Chinese threat is seen by everyone, many European members of the Atlantic Alliance consider Beijing militarily distant while it is instead an important commercial partner. It is true that the alarms sounded over the dangers of the 5G Chinese networks are justified, but it is clear that after the Echelon and Datagate scandals gave evidence of the unscrupulous espionage carried out by Washington against its allies, it is a bit humorous that the United States is admonishing the Europeans about the risks of espionage by Beijing.

Despite all of the disagreements, Stoltenberg stoically tried to celebrate the 70 years of NATO by minimizing the disagreements: “The lesson we have all learned from history teaches us that, despite these differences, we have always been capable of uniting together on the key objective of guaranteeing our international security interests,” he said. For this reason, “the plans to protect Poland, the Baltic States, and others” remain important to “send a clear message: that we have strength and we are ready to defend our allies.”

The weakness of NATO in the present crisis is certainly due to the progressive cleavage between the interests of the United States and Europe: it is difficult to be political and commercial rivals while simultaneously being allied on the military level, just as in Europe it is impossible to believe in a “bulky” military ally like the United States that places or threatens to place sanctions on our economy or wants to force us to place sanctions on Russia, Iran, and tomorrow who knows what other nations.

In addition, NATO is paying the price of never having reckoned with its defeat in Afghanistan against the Taliban, disguised as a retreat of combat forces completed in 2014. It was a defeat due to the chronic incapacity of Europe to sustain even minimal military losses, to fight a long-term conflict even if at low-intensity, and to the decision to support the sporadic and often contradictory US military effort, not with the objective of winning but only of making a token offering to the alliance with the United States.
After the Afghan defeat, NATO suffers from an intrinsic weakness that is well represented by Erdogan’s blackmail, by its scarce unity of purpose, and by an internal debate that hardly hides the alliance’s vocation crisis.