Schooyans, the forgotten prophet for a culture of life

It is significant to note the embarrassed silence in the Church on hearing the news of Monsignor Michel Schooyans' death on 3 May at the age of 92. The Belgian Jesuit, philosopher, and theologian had written numerous essays on bioethics, demography, and international organisations, denouncing the “culture of death”. But in recent years he had noticed how this worldly ideology had infiltrated the Church. 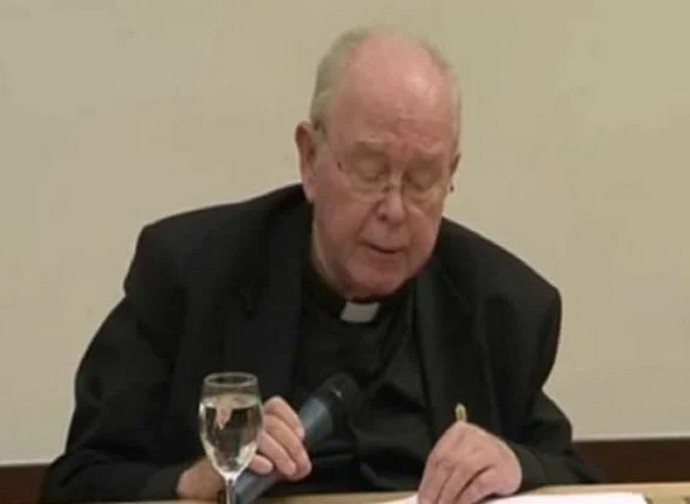 It is significant to note the embarrassed silence with which the Church received the news of the death of Msgr Michel Schooyans on 3 May at the age of 92. Belgian, Jesuit, philosopher, and theologian, professor at the University of Louvain and other universities around the world, author of about twenty books, Schooyans was a fundamental point of reference for John Paul II, because his scientific studies on bioethics, demography, international organisations were well matched with the insights and indications of the Polish pope.

He was able to describe with great precision the origins, proponents, and consequences of the 'culture of death', which John Paul II denounced so many times, countering it with the 'culture of life', which Msgr Schooyans also knew how to portray and celebrate. In many of his essays he has described the perversion of the so-called New World Order, aimed at "reducing the number of diners at the table of humanity", as the subtitle of his book New World Disorder reads, prefaced in 1997 by the then Cardinal Joseph Ratzinger. Those were the years of the UN international conferences (on the environment, population, development) that laid the ideological foundations of the New World Order and in which the Holy See played a leading role in stopping the advance of an anti-human ideology.

It was no coincidence that Msgr Schooyans had been called to the Pontifical Academy for Life, the Pontifical Academy for Social Sciences and the Pontifical Council for the Family. It was at one of the meetings of this Pontifical Council, then headed by the Colombian Cardinal Alfonso Lopez Trujillo, that I personally met Msgr Schooyans. I had written the book Il complotto demografico (The Demographic Conspiracy), immediately after the 1994 Cairo International Conference on Population and Development, and Msgr Schooyans was an undisputed authority on demography and UN policies. I was struck by his humility and discretion that accompanied great competence and intelligence, as well as clarity of judgment.

He was aware of the seriousness of the historical moment we are still living through, a true anthropological revolution which, born of Western societies, is imposing itself on the whole world through UN agencies. A profound death wish that hates and destroys life: abortion and euthanasia promoted as human rights when they are mere instruments of social engineering activated by the powerful. Above all, abortion represented a front that he fought strenuously. We need only mention the titles of some of his books translated into English:  The Hidden Face of the United Nations, The Demographic Crash. From Fatalism to Hope, Bioethics and Population. The Choice of Life, Abortion. A Political Approach, Power over Life Leads to Domination of Mankind

Not forgetting the short essay in French, Sur l'affaire de Recife et quelque autres...: Fausse compassion et vraie désinformation, on the shocking case of 2009, when a 9-year-old Brazilian girl, raped by her stepfather and pregnant with twins, was made to abort by doctors. The case provoked a very harsh controversy between the bishop of Recife, who excommunicated the doctors, and Msgr Rino Fisichella, then president of the Pontifical Academy for Life, who took a position "in favour of the girl", in reality justifying the doctors' decision. Msgr Schooyans wrote a long indictment demonstrating that Msgr Fisichella had relied on false information and false assumptions, and appealed directly to the Pope, complaining of the scandal of the position taken by those representing the Pontifical Academy for Life.

Schooyans called the death ideology that pervades international politics "Terrorism with a human face", as the title of another of his books puts it, a death drive typical of contemporary ideologies. Not only communism, fascism and Nazism: "It is well known", he said in his book-interview The Idols of Modernity, "how the totalitarian ideologies of the 20th century have survived the regimes that inspired them. These ideologies have in common the rejection of any moral reference point. One must be ready to die, or to give death, if Party discipline, the purity of the Race or the State so requires. These ideologies, which flourished under the banner of communism, Nazism and fascism, are still very much alive, and moreover, today, they are supported by the shocking wave of neo-liberal ideology".

And again: “Unlike classical terrorism, the new terrorism is all the more effective the more it is discreet. It uses a range of disciplines including biomedical and demographic sciences, law and communication techniques. This terrorism is logistically supported and financed by some of the most important international organisations. This new terrorism primarily targets the intellectual and moral integrity of people. It seems to have a human face; it seems to honour the truth; it gives the impression of valuing freedom, when in reality it only seeks to ensnare people in the meshes of the culture of death". Looking back at the history of these last two and a half years, it’s evident just how prophetic his words are.

What is the response to all this? Only the Gospel is an answer to "world disorder", the only possibility to put the world back in order, said Schooyans, who also dedicated a book to this theme: The Gospel Confronting World Disorder. The message of the Church," he wrote, "presents the simplicity and radicalism of the Gospel: it is an invitation to Happiness. Happiness consists in loving. (...) Men must be given back the joy of living and loving".

But in recent years he had warned that also in the Church worldly ideology was gaining the upper hand, and a clear sign of this were the two Synods on the family (2014-2015), as he wrote in a 2016 essay. It is worth reporting a short passage of extreme topicality, dedicated to the return of the "casuists, that is, the moralists who strive to resolve cases of conscience without yielding to rigorism". Casuistry was born in the 17th century and gave rise to a controversy, which also saw Pascal harshly criticise the casuists.

Here is what Schooyans wrote: "Some moralists endeavour to provide solutions that please people who have recourse to their enlightenment. In these casuists of yesterday and today, the fundamental principles of morality are eclipsed by the often divergent judgments issued by these grave spiritual advisors. The disregard with which fundamental morality is afflicted leaves the field open to the establishment of a positive law that banishes from the codes of conduct anything that insists on referring to the fundamental rules of morality. The casuist, or neo-casuist, has become legislator and judge. He cultivates the art of disorienting the faithful. Concern for revealed truth accessible to reason loses its interest. At most, one will only be interested in ‘probable’ positions. Thanks to probabilism, a thesis can give rise to contradictory interpretations.
Probabilism will make it possible to suggest hot and cold, pro and con. One forgets the teaching of Jesus: "When you speak, say 'yes' or 'no', everything else comes from the Evil One" (Mt 5:37; Jas 5:12; cf. 2 Cor 1:20). Nevertheless, each neo-casuist will move according to his own interpretation. The tendency is towards confusion of theses, duplicity, double or triple truth, and a flood of interpretations. The casuist has a divided heart, but intends to remain a friend of the world (cf. Jas 4:4-8).
Little by little, the rules of conduct laid down by the Lord's will and transmitted by the Magisterium of the Church will wither away. The moral qualification of acts can therefore be modified. The casuists are not content with softening this qualification; they want to transform the moral law itself. This will be the task of casuists, confessors, spiritual directors, and sometimes of some bishops. They will all have to be concerned with pleasing.  Consequently, they will have to resort to compromise, to adapt their discourse to the satisfaction of human passions: no one must be rejected".