“Satan reigns, Our Lady calls us to conversion”

Satan's plan has already been implemented; the false religion of man who has replaced God rules the world”. “Our Lady has a plan to save humanity; this is the time of the spiritual battle that prepares the triumph of the Immaculate Heart of Mary”. “Terrible things will happen, everyone will have to decide whether to entrust themselves to God or not, eternal salvation is at stake”. “The Coronavirus comes from the devil, it is a test: the solution is to renounce Satan and return to God”. “The cult of Mother Earth is one form of false religion; it's terrible and ridiculous”. Father Livio Fanzaga, Director of Radio Maria, explains to the Daily Compass the present times according to Our Lady's messages in Medjugorje, the historical turning point announced, and the prophecies: “We have entered the time of the ten secrets”. 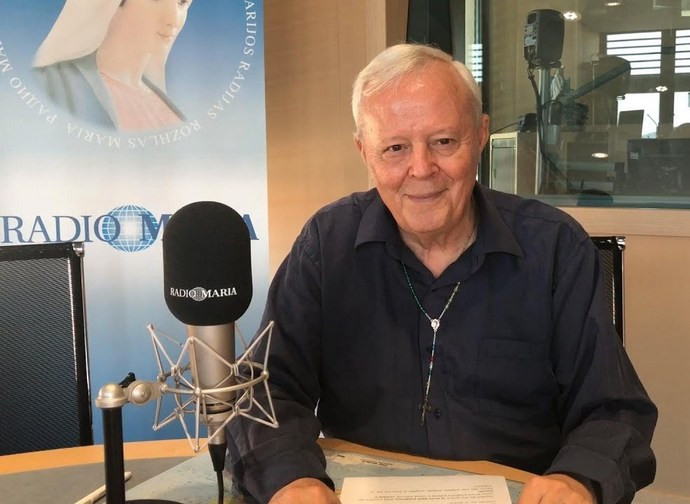 The world is now under the rule of Satan, so this is the time of the great spiritual battle that prepares the triumph of the Immaculate Heart of Mary. This is the judgement on the present time that is increasingly affirmed on the airwaves by a famous voice, that of Father Livio Fanzaga, Director of Radio Maria, a network that has generated one hundred radio stations all over the world to bring Our Lady's message of love to everyone.

In particular, Father Livio has become the “messenger” of Medjugorje, the town in Herzegovina where Our Lady has been appearing for 39 years. Last year, the Holy See at least recognized “the abundant fruits of grace that have sprung from the considerable flow of people who come to Medjugorje” without officially pronouncing itself on the authenticity of the apparitions. Last February, however, sources in the press made public the report of the Vatican Commission according to which, at least the first week, in June 1981, the apparitions really did take place.

Just two days ago, 25 June, celebrations were held for the anniversary of the apparitions and the entry into the 40th year: a symbolic number which, together with the evident global crisis we are experiencing, has turned the attention even more to the messages of Medjugorje and to an interpretation of the present events in the light of God's plan. We therefore telephone Father Livio, who is undoubtedly an authoritative interpreter of these messages.

Father Livio, what is happening and what should we expect?
Firstly we must look at what has already happened. Those who have followed the apparitions from the beginning have seen in these 39 years the implementation of the two plans, the two projects explained by Our Lady: Satan's plan and Mary's plan. These plans lead to the spiritual battle of the time of secrets and the triumph of the Immaculate Heart.

So let's start with Satan's plan.
It has been set out by Our Lady from the beginning: the construction of the world without God, the replacement of Christianity in the West with false religion, a humanitarian religion, a true Antichristic imposture, of which the Catechism of the Catholic Church also speaks. It is a world, as Our Lady said, with no happiness, no future, and no eternal salvation.

For some time now you have been stating ever more forcefully that this plan has been realized.
It is Our Lady who says this and in any case we can see it with our own eyes. Humanity has put itself in God's place; the worldly powers are all under this false religion. Satan has everything in his hands, the financial world first of all, as well as politics and the mass media. This year on 25 March Our Lady pronounced a sentence she had never said before: “Be more united with God, Satan reigns and wants to destroy your lives and the planet on which you walk”. In the past she had warned that Satan is strong and never sleeps, she had given three terrible messages about modernism, a way in which Satan diverts us and puts us within his reach, but now she says: “Satan reigns”. It is a very heavy, very strong statement; it means that Satan has already achieved his goal: greed, pride, and hatred reign in hearts. The kingdom of Satan is the triumph of lies and violence. She described what we are gradually becoming aware of.

Let’s talk about Our Lady's plan.
It is to renew the Church, to strengthen the faith of the Church, a plan that has been more clearly revealed in the last decade. In her messages to Mirjana, she insisted on two points: prayer for the pastors and the training of a group, those who have responded to her call and spread Our Lady's love.

Why the insistence on prayer for pastors?
It is as if Our Lady fears a crisis within the Church.  For ten years almost every message of the 2nd of the month has repeated “pray for your pastors”, “love your pastors”, meaning above all the bishops, and of course the Holy Father, who is the foundation of the Church. She has also explained that She wants her pastors to speak the Word of Jesus, to have the heart of Jesus, and to perform the actions of Jesus. She has urged us to pray for the pastors for so long, and she has also said “With your pastors I will triumph”. I have always interpreted this as Our Lady's great concern for the unity of the Church, there is no Church without pastors, it is not Catholic.

So let’s come to the present moment: Satan reigns, man's own religion has become established, but Our Lady has also prepared her troops. So let’s return to the original question: what should we expect now?
We are at a turning point, and we understand this from some significant facts: last March 2nd the apparitions to Mirjana on the 2nd of the month stopped. They had begun in 1987 and were the formative moment for the faithful, the evangelisation of the faithful. Second fact: the announcement that “Satan reigns” –  his plan has been implemented. Third: we are entering the 40th year, a symbolic number from the biblical point of view.

The shift means that we are now entering a period of trials, which concerns the faith, it is the time of the 10 secrets: it will be an incredible trial, never happened before in the history of the Church, which must be interpreted in the light of Revelation. It is the time of the great spiritual battle, at the end of which the two beasts – financial, political, mass media power on one side and false religion on the other – will be cast “into the pool of fire and sulphur” and the Lamb will win.

It’s the time of the 10 secrets, you say. There's been much speculation about these secrets...
We must understand that there is a radical difference between these secrets and all the others, because each one of them will force people to make choices. It's not as if you're there waiting for something to happen that you have to witness. No, every secret will be announced three days before: and we will be told what will happen and where it will happen. The “where” is interesting, because it means they will be local events. The first two will be in Medjugorje; this will have to be an example of how to deal with secrets. The third will be a visible, indestructible sign in Medjugorje, proof that Our Lady has really been there. Then all the others, in an apocalyptic context of anguish and fear for what will happen: every man in the world will have to decide whether to believe or not to believe, and decide what to do. Because it will be some event in a precise place, so there will be decisions to be made. But above all: to trust in God or not to trust in God? Eternal fate depends on it. It is the time of great decisions, and it will be up to each person to decide for himself. A bit like what happened with the Coronavirus, this is a test of what could happen. Terrible things will happen, but Our Lady offers us the chance to save ourselves, Mary's power will save humanity. But beware, Our Lady warned us: do not wait for the time of secrets to convert, it may be too late. Those whose hearts are hardened will risk closing down even more.

On the radio you have repeatedly identified ecologism, the cult of Mother Earth, as the false religion.
In the false religion flow many ideologies, including social and political ones, all of a worldly nature.  It is the synthesis of all that man is and does excluding God. So ecologism, new age, Eastern religions and much more. As for ecology: it is one thing to affirm that the earth is a garden that God has given us to care for, it is quite another to arrive at the cult of Mother Earth, where it is claimed that we come from the Earth and we will return to the Earth. This is something terrible and even ridiculous. Ridiculous like all immanentist forms.

Among the things that are happening, what strikes us is how the so-called antiracist movement began with attacking statues and ended up attacking representations of Jesus, Mary, St. Michael the Archangel. It's shocking.
Shocking but enlightening. For the simple reason that Satan is behind it, fuelling the hatred; and Satan’s hatred always ends up on Jesus Christ and Our Lady. There is nothing to be done, it is the endpoint. Our Lady repeats it many times: Satan wants hatred and war. And so in the world that is Satan's kingdom there is hatred, and hatred grows continuously and ends up striking the Church, the Marians, Jesus Christ, Our Lady, the saints. That's Satan’s endgame.

Returning to the secrets and prophecies, what is striking is that Our Lady does not tell us the future, as if avoiding spoilers about a film, but she stimulates our freedom, she pushes us to make decisions. So, in this situation, what is our task, what is the decision to make?
It is conversion, to return to God. Let's think about what's happened in the last few months, the pandemic. On 25 July 2019, Our Lady warned: “The trials will come and you will not be strong, Satan will roar, but if you are mine you will win”. This unexpected thing was already prophesied, we were not ready, we were not strong. This pandemic comes from the devil, God allowed it in order to teach us something, but the author is the devil because it originated from where new wars are being prepared; by negligence, error or whatever else we don't know, but it is so. Our Lady had told us that if we returned to Her Son, resumed prayer, fasting, keeping the commandments, our prayers would be heard and our petitions answered. Strong words: “Renounce the devil and follow My Son”. This is true conversion: one abandons sin, one abandons idolatry, one repairs apostasy, one returns to the true faith. This is the path of the prodigal son, this is absolutely necessary. As Our Lady said to the children, there is a battle between Jesus and the devil. Souls are saved through conversion, our conversion above all. This pandemic is the instrument through which they want to create the New World Order, to impose the ideology of the man-God, to impose the Antichristic creed on everyone, right from the start, in the nurseries. It is clear that the epidemic leads to all this. The only way out is by returning to God.