Among Benedict XVI's favourite saints is Saint Joseph, whom the pope describes as “the man who gave God the greatest proof of trust, even in the face of such an astonishing announcement”. An exquisite example of a putative father, Joseph is described by Ratzinger first and foremost as a just man. Numerous feasts and solemnities are inspired by him. And there is even a shrine in Provence where he appeared. 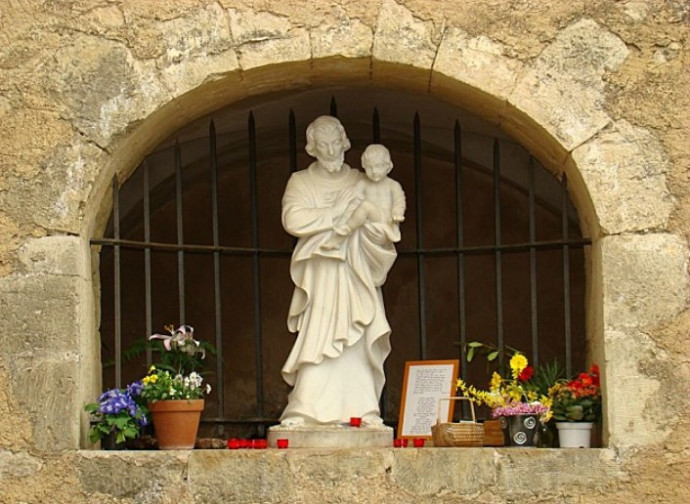 After the funeral of Pope Emeritus Benedict XVI, we continue to pay homage to him, this time talking about the saints who most inspired him. First among them is St Joseph, whom the pope describes as “the man who gave God the greatest proof of trust, even in the face of such an astonishing announcement” (he is referring to the Annunciation). An exquisite example of a putative father, Joseph is described by Benedict XVI first of all as a just man: “Only God could give Joseph the strength to give credit to the angel. He is the model of the just man who, in perfect harmony with his bride, welcomes the Son of God made man and watches over his human growth”.

In fact, Joseph protects Mary and Jesus against all adversities, beginning in the stable in which the Son of God was born: his figure cannot be separated from those of the Virgin Mary and Jesus.

St Bonaventure is the first theologian to organically rethink Joseph as protector of Mary and the Child Jesus, while Duns Scotus, also a Franciscan, proposes an explanation of Joseph as Mary's spouse in De matrimonio inter B.V. Mariam et sanctum Joseph. In this text, the great theologian explains the distinction between the rights over bodies and their use in marriage, which, in this case, is to be considered a "divine matter regulated by the Holy Spirit".

Thomas Aquinas also often reflects on Joseph's presence in the plan of the Incarnation and sees its great usefulness, because Christ needed the name, care, and protection of a human father. According to the laws of the time, if Mary had not been married, the Jews would have considered her an adulteress and stoned her. The medieval theologian goes on to say that the marriage of Mary and Joseph was a true marriage: "They were united to each other by mutual love, a spiritual love. They shared those conjugal rights that are inherent in marriage, although, because of their vow of virginity, they did not use them”.

Joseph fulfils his role with humility and infinite fidelity, aware of the responsibility he has: he is a model human and it is no coincidence that his cult became increasingly vibrant from the 12th century onwards. St Bernard of Clairvaux (1090-1153), a Benedictine mystic, clearly described the hidden and humble figure of Joseph, often taking him as an example in his preaching. In the Sermons composed for the feasts of Our Lady (In laudibus Virginis Mariae), we find passages in which he states that “the fame of the Virgin Mary would not be complete without the presence of Joseph”. About the saint, Bernard warns, there is “no doubt that he was always a good and faithful man. His bride was the Mother of the Saviour. Faithful servant, I repeat, and wise, chosen by the Lord to comfort his Mother and provide for the sustenance of her son, the only faithful helper, on earth, of God's great plan”.

Bernard of Clairvaux also has a great influence on medieval literature and poetry: even Dante Alighieri worthily invokes the name of Saint Joseph at the climax of the Divine Comedy.

Devotion to St Joseph grew over the following centuries and culminated after an apparition of him in a small village in Provence: Cotignac. The uniqueness of this apparition is twofold: first of all because here Joseph appeared alone (in 1660), and secondly because he appeared in a place where the Virgin Mary had also appeared more than a century earlier (in 1519), carrying the baby Jesus and with the Archangel Michael and Saint Bernard at her side. A sanctuary dedicated to St Mary of Graces was thus built, which soon became a place of pilgrimage for couples wishing to have children.

It still is today, and it is amazing to read the plaque affixed to the entrance: it is a text of gratitude to the Virgin Mary, to whom the author gives thanks for his own birth (considered a miracle as the queen seemed barren) and existence. Following this miracle, his father, Louis XIII, consecrated the Kingdom of France to the Virgin of Cotignac.

The author of the text on the plaque is Louis XIV, who was conceived after a pilgrimage by his mother, the Queen of France, to the shrine. The plaque was placed on the occasion of the pilgrimage that the Sun King himself made to Cotignac in 1663.

Joseph appeared on a particularly hot day to a young shepherd, thirsty and tired from the heat. The boy sits down, exhausted, leaning against a smooth rock and watching tiredly over his goats grazing on the sparse yellowish grass. Next to him suddenly appears an old man of imposing stature, who points to a rock and says: “I am Joseph, lift it up and you will drink”. And so it was. An abbey dedicated to St Joseph, now a cloistered monastery, arose on the site.
The spring still flows today from that stony ground and thousands of pilgrims have been flocking there for centuries from all over the world to pay homage to that wonderful apparition of St Joseph.

Many traditions are linked to St Joseph in Italy and around the world: St Joseph's Tables and the bonfires dedicated to him are among the most varied commemorations, depending on the region or country. In the Catholic Church, the feast dedicated to St Joseph takes place on March 19. In some places, such as the Vatican and Canton Ticino (but not in Italy), it is a feast day of obligation.

The first to celebrate it were the Benedictine monks in 1030, followed by the Servants of Mary in 1324 and the Franciscans in 1399. It was finally promoted by Popes Sixtus IV and Pius V and made obligatory in 1621 by Gregory XV. Another feast day was that of the 'Marriage of the Blessed Virgin Mary with St Joseph' initiated in France in 1517, adopted by the Franciscans in 1537, promoted in particular by St Gaspar Bertoni, and celebrated on 23 January.
In 1847, however, Pius IX extended the feast of the Patronage of St Joseph, already celebrated in Rome since 1478, to the whole Church: it was celebrated on the third Sunday after Easter and was later moved to the third Wednesday after Easter. It was finally replaced in 1955 by Pope Pius XII with the feast of 'Saint Joseph the Craftsman', assigned to 1 May, so that Labour Day could also be fully shared by Catholic workers.

In some places, 'the Flight into Egypt' was celebrated on 17 February, which is still preserved in the special calendar of the Catholic Church in Egypt, while the Copts commemorate it on 1 June.

St Joseph has been depicted by the greatest artists in countless paintings and sculptures; many places of worship around the world are dedicated to him; there are many different feast days dedicated to him; and, as we have seen, there are also many popular traditions linked to the saint (many of them gastronomic).

But what makes Joseph close to our hearts emotionally is the fact that, with his role in Jesus' life, he represents a model of fatherhood that transcends blood ties.