A great goldsmithing artist as early as the 7th century and a precursor of the Renaissance, Saint Eligius of Noyon, who was also appreciated for his care for the needy and for building churches and monasteries, served in the court of Chlothar II and his son Dagobert I.
- THE RECIPE: NOYONNETTE 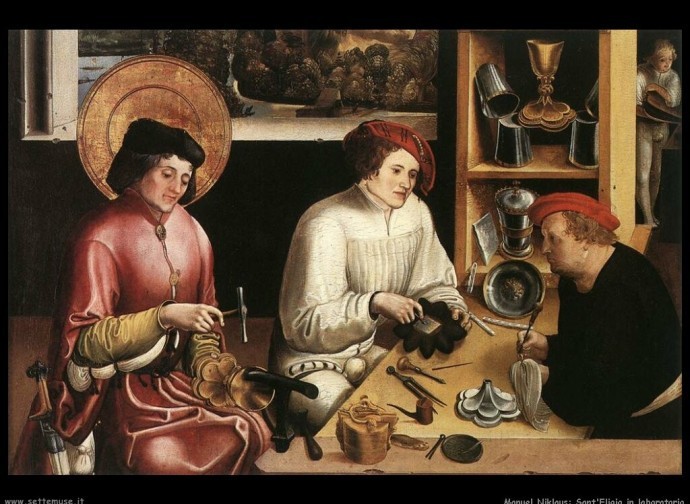 The young king is seated on a chair with high armrests, placed on a small platform covered with blue fabric. His blond, curly beard and full lips give him a sensual look. His bright blue eyes are focused on the large door that opens onto the throne room. Finally the door opens and a young, simply dressed man walks towards him. The young man bows and the king welcomes him. Then he asks him if he has brought with him the throne he had ordered and if the gold he had given him for its construction was sufficient.

The young craftsman makes a sign and two helpers bring into the hall a magnificent throne made entirely of solid gold. They place it at the feet of the king, who rises from his armchair and comes to admire it. He is evidently pleased, his eyes light up and a gratified smile spreads over his face. But the craftsman nods to his assistants, who go out and return immediately carrying a second throne; it is smaller, but also in solid gold and of magnificent workmanship.

The young man explains to the amazed king that there was enough gold to make two thrones. The king cannot hide his astonishment at such honesty.

On that day in August 614, a partnership was born between the two men that would last even after the death of the king, who was none other than Chlothar II (584-629) King of the Franks, great-grandson of Clovis. In front of him is Eligius of Noyon (588-660). He was born in a provincial town near Limoges into a very modest family, but from an early age he displayed a gift, a great ability to make precious objects. So he was sent to work in the workshop of a local goldsmith, Abbon. His fame grew in no time, so much so that he attracted the attention of the king who had entrusted him with a sufficient quantity of gold to create the throne.

Thanks to the episode of the two thrones, Eligius was appointed court goldsmith and master of the mint by the king. He continued to promote the art of goldsmithing. Legend attributes numerous works to him (now largely lost): the sacred vases and other furnishings for the Parisian churches of Notre Dame and Saint Denis, Saint Loup in Noyon, Saint Martin in Limoges and the Chelles Abbey.

Chlothar’s successor, his son Dagobert I (603 - 639), promoted Eligius to the position of treasurer. During these years, given his talent as a peacemaker, the king also entrusted him with some delicate diplomatic missions, which have remained in history: for example, he restored peace between the Franks and the Bretons by persuading King Judicael to declare himself Dagobert's subject. At the Frankish court he got to know many people destined to be proclaimed saints, such as Sulpice, Desiderius, and Audoen.

Eligius used his considerable financial means to help the needy. His 'speciality' was the ransom of prisoners, but he helped all the poor and sick whose paths crossed with his own. He had a disciple, who also became a saint - St Tillon (Thillon) - commonly known as Til or Théau -, the son of one of the Saxon chieftains crushed by Chlothar II and sold into slavery, whom Eligius had ransomed from slavery and trained in Christian life and who became abbot of Solignac before retiring as a hermit to Brageac.

In 639 Dagobert I died, and a year later Eligius, though still a layman, was elevated to the position of bishop of the diocese of Tournai. He was subsequently consecrated on 13 May 641. From then on, Eligius devoted himself to the conversion of the pagans still present in his vast diocese (especially in the north). He promoted the cult of the saints whose bodies he found (St Quentin, St Lucian of Beauvais) and whose reliquaries he also made.

After his death, St Audoen wrote his biography, which also inspired Jacopo da Varagine (1228-1298) to write his Life, enriching it with numerous episodes taken from popular legends, which he included in the Legenda Aurea.

Saint Eligius performed a miracle: he is said to have reattached a horse’s leg, under the guidance of Jesus, who appeared to him in a vision. This episode made him very popular in the Middle Ages and made him the patron saint of farriers and veterinarians (as well as being that of goldsmiths and numismatists). The Roman Martyrology fixes his liturgical memory on 1 December and on his feast day, in some places in France, horses are blessed. The tradition is also found in Italy, for example in Sciara, in the metropolitan city of Palermo, and at Casale del Pozzo of Nocera Inferiore in the province of Salerno. His cult is also attested in Sansepolcro, in the Upper Tiber Valley, where he is worshipped in the church of Sant'Antonio Abate, seat of both the confraternity of the same name and the goldsmiths' guild.

Eligius brought the art of goldsmithing to an extraordinary degree of perfection for his time: his most notable works were the bas-reliefs of the tomb of Saint Germain, Bishop of Paris; he also created a large number of reliquaries intended to contain sacred relics; the two gold seats enriched with precious stones that he made for Chlothar II, and many more of these works could still be seen in 1789, before they were destroyed by the French Revolution. He also contributed greatly to the erection of numerous religious monuments.

Eligius was proclaimed a saint under Pope Pius XI because of the miracle he performed through his intercession in 1937 on Angela Mignogna from Taranto, who suffered from uterine cancer. He is usually depicted as a bishop or a goldsmith, or more rarely with attributes of both professions.

The charm of his story lies in his human complexity: he was a Renaissance man, centuries before this historical period existed. An artist and craftsman without equal, a diplomat and minister, a bishop, but above all a man of faith and charity, in short, a man of God.