The serious sexual abuses committed by Father Rupnik against the nuns who were under his spiritual care, and the serious crime of absolution of the accomplice, which procured his excommunication, are now established facts. But the powerful network of complicity and protection thanks to which he still goes unpunished has now reached even the Holy Father: he alone had the power to remit the excommunication. So what happened? Adequate answers are still awaited from the Vatican. 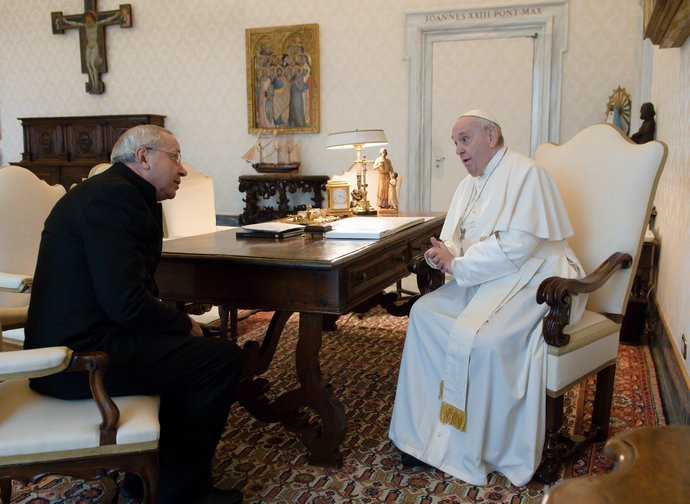 The Rupnik case is taking on, day after day, an increasingly serious and worrying connotation (here the excellent chronological reconstruction by E. Pentin). This was not a moment of weakness, but a series of premeditated abuses, carried out with 'theological' justifications, treacherous psychological manipulation and intimidation of the victims not to reveal anything, with a cloying assurance of being protected. This is what emerged in the interview with the former nun of the tormented Loyola Community, founded in the 1980s by Father Marko Rupnik and Sister Ivanka Hosta.  which appeared in Domani on 18 December last; facts and details that the woman had testified on 10 December 2021 to the Dicastery of the Doctrine of the Faith, and which she then put down on paper again in a letter addressed directly to the Superior General of the Jesuits, Father Arturo Sosa, and in copy to his delegate, the Jesuit Johan Verschueren, to the Prefect of the same Dicastery, Cardinal Ladaria, to the Cardinal Vicar of Rome, Angelo De Donatis, to Father Hans Zollner, also a Jesuit and an expert in the fight against abuse, and to the director of the Centro Aletti, founded and directed by Rupnik, Maria Campatelli.

Last Monday, Msgr Daniele Libanori, also a Jesuit, Episcopal Vicar of the diocese of Rome and in charge of investigating the scandals that took place in the Loyola Community, confirmed the news leaked in recent weeks: "It seems that the news reported in the newspapers corresponds to the truth”, he wrote in a letter addressed to the priests of his area of responsibility in the diocese of Rome, emphasising how the people "wounded and offended, who have seen their lives ruined by the evil they suffered and by complicit silence", have the "right to be compensated also publicly in their dignity, now that everything has come to light". He went on to say: “I strive to silence the feelings I have when confronted with these shocking testimonies, provoked by arrogant silences, which expose before the world the putridness with which some spiritual schools are soaked”. Strong words, which seem to be the outcome of a clash with Cardinal De Donatis, who, according to a reconstruction (see here), dismissed all the circumstantiated accusations made against Rupnik as slander. In a meeting reserved for the bishops of the Capitoline diocese, held on Friday 16 December, after De Donatis' remarks, Archbishop Libanori allegedly made a quick exit. Then came the decision to write the letter.

Msgr Libanori's confirmation follows the Jesuits' admission (see here) of the double (for now) affair involving the Slovenian Jesuit. Having established, therefore, that these are not unverified rumours, we must begin to draw some conclusions.

First of all, there’s more than one doubt about the sanctions imposed on Father Rupnik. A priest, a religious, who used his priestly authority and his spiritual ascendancy to carry out what he committed on novices and young nuns, and who proves to have serious disturbances related to the sphere of sexuality, since he also turned out to be a habitué of pornography, was simply forbidden to hear confessions, preach spiritual exercises, and carry out spiritual direction. As for the prohibition to engage in public activities without the permission of the local Superior, it is rather ridiculous, both because of the fact that religious are already bound by the vow of obedience and because of the manner in which this restriction is exercised.

Because, in the meantime, Father Rupnik continues to exercise his ministry publicly. On 8 December he was in fact seen preaching in a church in Rome, near Santa Maria Maggiore, “with the permission of the superiors”, according to the person concerned. And less than a month ago, on 30 November, he was in Brazil to receive an honorary degree. If one had any sense of justice towards these women, whose lives have been lacerated and trampled upon not only by the Jesuit's performance, his intimidation, but also by the bravado with which he has preached left and right about religious and spiritual life for thirty years, as well as taking his artistic achievements around the world, one would have to at least agree that these "precautionary measures" are a mockery.

Even less respectful of the dignity of the people involved appears to be the attempt to dismiss the abuses committed in the early 1990s as time-barred. How is it possible for such nefarious acts, serial abuses carried out with the aid of the priestly ministry, to fall under the statute of limitations?

However, there is not only a problem with the Jesuits ad intra, but also with those ad extra. The first investigation, in fact, concerned the absolution of the accomplice against the sixth commandment, an absolution - invalid, according to can. 977 of the Code of Canon Law - that Father Rupnik had given in 2015 to an Italian novice, with whom he had sinned de sexto. In January 2020 the trial had ended with a unanimous conviction, which recognised the credibility of the accusation. The Jesuit was thus notified, by the Congregation for the Doctrine of the Faith, of his excommunication in May of that year, an excommunication that was later lifted at the end of the month.

Now, this canonical offence is one of the six that provide for excommunication latae sentientiae - i.e. 'automatic' excommunication - reserved for the Apostolic See (the others concern profanation of the consecrated species, physical violence against the Pope, consecration of a bishop without papal mandate, violation of the sacramental seal, and attempting to ordain a woman). This meant that the excommunication could only be lifted by the Pope. According to the Jesuit General Delegate, Father Johan Verschueren, it was the CDF itself that removed the excommunication in a very short time. So either it was an illegitimate initiative by Jesuit Cardinal Ladaria, or the request came from the Jesuit Pontiff himself and was then notified by the Congregation. It is also worth noting that Pope Francis, in March 2020, i.e. two months after the Congregation had condemned Father Rupnik for the absolution of the accomplice, had called the Slovenian Jesuit to replace Father Raniero Cantalamessa for Lenten preaching in the Vatican (see here).

On the one hand, the expired statute of limitations, and on the other, the Pope's very likely intervention to lift the excommunication has made the sanctions imposed on Father Rupnik derisory; derisory objectively, because they do not correspond to the seriousness of the repeated acts and because of the damage caused to all the people involved so far. But even more irritating is the attitude of those who, despite knowing, tried to cover it all up, letting the cries of those who had to suffer Father Rupnik's treatment fall on deaf ears, then finding him pontificating everywhere. No less unbelievable then is the lightning remission of the excommunication, which sends a disturbing message of how it is possible, in the Church, to get off lightly, whatever the wrongdoing. Obviously if one has the right friendships. If the 'black pope' shows that he is increasingly guilty of involvement in the affair, even the 'white pope' - in the name of the transparency he has so often invoked - cannot avoid the demand to give adequate justification.