The Bishop of Brescia, Italy, has finally established the diocesan Shrine of Rosa Mystica Mother of the Church in Fontanelle, Montichiari. It’s an historic turnaround and an important step towards recognising the apparitions of the Blessed Virgin Mary to the presumed visionary Pierina Gilli. Devotion to the Rosa Mystica continues to spread throughout the world, showering graces and miracles. 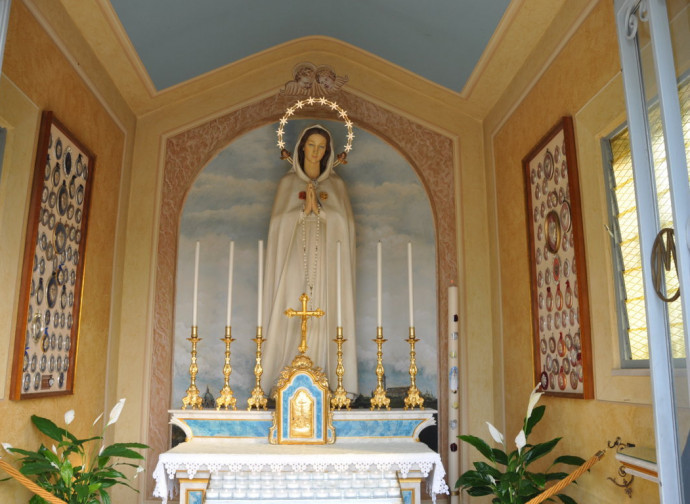 This historic event had been widely publicised for months, and yet what evolved on Saturday, December 7, 2019 in Montichiari (Brescia) far exceeded expectations, even of the most devout souls.
In fact, towards four in the afternoon, too early for sunset, in time for the onset of winter, the sky turned rapidly fire red and the sun – according to witnesses – was easily visible to the naked eye for sometime.

Another scene that spoke powerfully was that of the Bishop, kneeling at the foot of the Cross visibly moved by the sight of the thousands of pilgrims in prayer, thus completing the evocative picture of a day that will write history.

We are talking about the Holy Mass celebrated by His Excellency Pierantonio Tremolada, Bishop of Brescia, Italy, on the occasion of the establishment of the diocesan Shrine Rosa Mystica – Mother of the Church. The so-called “little Italian Lourdes” has become a place for a worldwide cult of devotion to the Blessed Virgin Mary, commencing from the end of World War II.

THE MESSAGE OF THE BLESSED MOTHER

It was to Pierina Gilli, a nurse and consecrated woman born in 1911 at Montichiari to a modest family of peasants, that the Blessed Mother began to appear in 1944, calling herself  “Rosa Mystica and Mother of the Mystical Body, the Church.”
After a long series of private messages, beginning in 1947, Rosa Mystica appeared to Pierina in a series of public apparitions at the cathedral of Montichiari (from November 16 to December 8). The Blessed Virgin appeared in white robes with three roses on her breast, whose meaning she explained to Pierina: they are the prayers, sacrifices and penances requested of the visionary and whoever believes in her appearance, in order to offer reparation for the wrongs committed by three specific categories of consecrated persons: those consecrated persons who betray their vocations, those who live in mortal sin, and those priests who betray Jesus, like Judas.

The second series of apparitions occurred in 1966 (from April 17 to August 6), during which time the Blessed Mother blessed the spring, where now stands the diocesan Shrine, rendering it miraculous and the source of innumerable graces. “My divine Son Jesus is all love. He sent me to make this fountain miraculous,” Rosa Mystica said to Pierina, at the same time asking her to kiss the soil where the water sprang forth and to erect a crucifix there so that “the sick and all of my children, before drawing or drinking water, may ask pardon from my divine Son with a beautiful kiss of love.” The Virgin also asked Pierina to take some mud near the spring and then to wash with the water from the spring, to show “that sin in the soul of children becomes mud, but when they wash with the water of grace, they become purified and worthy of graces.”

During the immediate post-war period, the Blessed Mother announced a great crisis of faith that would strike the heart of the House of God in particular those specially chosen, the consecrated. She made a strong appeal to everyone, consecrated and lay faithful alike, for a new conversion in the face of the spread of indifference and grave sins. For the Church of that time, its seminaries still full, such an explicit and dramatic appeal about the Church’s shortcomings and negligence was unthinkable. Today, however, with the hindsight of seventy years, we can understand how prophetic the words of the Blessed Mother truly were.

ROSA MYSTICA THROUGHOUT THE WORLD

Although, it has taken a long time for the processes of recognition for the Shrine and the apparitions to be carried out by the official Church, devotion to Rosa Mystica immediately spread throughout the world. Largely due to the enormous proliferation of graces and the continual occurrence of supernatural phenomena. Various facts offer proof: in Lebanon, for example, icons of Rosa Mystica have been found exuding perfumed oil, in America there are statues that have wept tears and blood, and the same phenomenon has been verified in India, where bishops and cardinals saw honey exuding from an image of the Virgin, a sign of blessing, and so on.

In Brazil, however, various prayer groups have given rise to an annual feast in honour of Rosa Mystica, with the presence of local priests and bishops. While in China a large Shrine entitled Rosa Mystica has been built, an absolutely exceptional circumstance if we consider the state of religious affairs there. Even Catholics from faraway Sri Lanka have fallen in love with Rosa Mystica, to the point that the community living in Italy makes a dedicated pilgrimage to the Marian shrine every year on the second Sunday of September.

There are, then, the miracles: at least two religious congregations have been inspired by Rosa Mystica, which make reference to Brescia and have been recognised by their respective bishops, as well as a myriad of religious associations. While the conversions and healings, both physical and spiritual, are beyond count: the Shrine is full of “ex voto” plaques expressing prayers of thanksgiving for graces received from all over the world.

Perhaps because of the strong message or the need to fulfil the prophecies themselves, the fact is that the more the devotion to Rosa Mystica grew, the harder life became for the alleged visionary. For Pierina Gilli in fact, the onset of the apparitions also marked the beginning of a period of great suffering, including calumnies, humiliations, and the very fact of not being believed by many people, even within the Church.

The first investigations on Gilli were conducted in a hasty manner, probably because of a certain prejudice. All those in her favour were silenced, leaving space only for those who vowed against her credibility and the state of her mental health.
Furthermore, it is necessary to emphasise that Gilli, at the time of the investigations, was sequestered for forty days without any contact with the outside world: she could not go to confession, she could not speak with her relatives and she could not receive the Eucharist. At the same time she was told that if she did not abjure the apparitions she would be excommunicated. She never recanted. Moreover, during that period, the poor woman suffered excruciating physical pain and underwent continuous diabolical assaults, including nocturnal torments that never allowed her to rest.

Today, however, due to the process undertaken by recent bishops and due to the institution of the diocesan Shrine, the judgment about the presumed visionary is changing. As Bishop Tremolada said during his homily on Saturday, December 7, “We are comforted by the full communion between our Diocese and the Holy See, in the shared desire to pursue with truth the extraordinary experience of Pierina Gilli in great humility and with sincere faith.”

In conclusion, it is necessary to emphasise what Rosa Mystica asks of the faithful, both those who come to visit Fontanelle as well as those spread throughout the world. A few requests, but very specific: