Rome reopens its churches. Pope and Cardinal Vicar blame one another

A new decree by the Cardinal Vicar of Rome, Angelo De Donatis, revokes the decision made just a few hours earlier to close the churches of Rome, after the pope thundered at his morning Mass in Santa Marta against “drastic measures.” And so the churches in Rome are reopening, but Cardinal De Donatis wrote to the pastors of Rome and revealed that the decision to close churches was made by the Pope. The protests by many of the faithful and alarmed phone calls from bishops and cardinals convinced him to make a U-turn. A disturbing spectacle of a church hierarchy in a state of confusion. And now may the bishops have the courage to reinstate public Masses with the faithful (obeying all security and health directives). 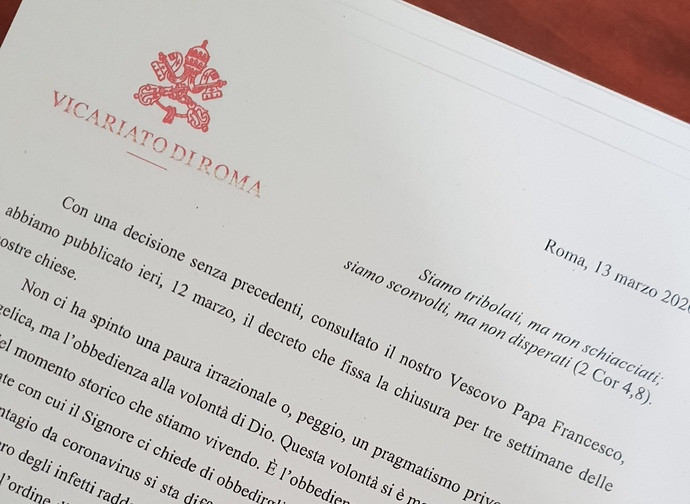 Change of orders, comrades: the churches in Rome will now reopen, at least “parish churches and those with missions that care for souls and equivalent churches.” Those churches remain closed that are “not parish churches, and more generally buildings of worship of whatever nature.” A new decree from the Cardinal Vicar of Rome, Angelo De Donatis, issued the morning of March 13, changes the decree issued just a few hours earlier on the evening of March 12 that ordered the total closure of all churches in the Diocese of Rome.

The sensational decision to close the churches, without any precedent, upset millions of the faithful, not only in Rome and Italy but throughout the world: the implication of decisions made in Rome on Catholic communities in every part of the world is not lost on anybody. Moreover, the decree closing Roman churches followed the communique of the president of the Italian Bishops’ Conference that moves in exactly the same direction, suggesting the same solution for the churches of all of Italy, as we have documented (see here).

But however desired and welcome this about-face may be, it is no less disturbing. The new decree was anticipated by the torpedo launched on the morning of March 13 by Pope Francis in his usual 7am Mass at Santa Marta. Praying for pastors, “who must accompany the people of God in this crisis,” Pope Francis said that “drastic measures are not always good” and called upon the Holy Spirit, asking that pastors be given the ability to take “measures that do not leave the holy faithful people of God alone” in such a way that “the people of God feel accompanied by their pastors and by the comfort of the Word of God, the sacraments, and prayer.”

A total disavowal of the decision taken on the evening of March 12. Since Pope Francis is the bishop of Rome, he hinted that Cardinal De Donatis and Cardinal Gualtiero Bassetti, president of the CEI, had agreed on such sensational measures behind his back, without consulting him. This would be difficult to believe given the profile of these two cardinals. But later in the morning this story line was reinforced by a hard-hitting interview of Cardinal Konrad Krajewski, the papal almoner, who was also present at the Mass at Santa Marta. Krajewski, who has a privileged and close relationship with the Pope, said in an interview with the American online news service Crux that he had opened his church of Santa Maria Immacolata on the Esquiline Hill, openly defying the decree of De Donatis. “It is an act of disobedience, yes,” said Krajewski, “I myself exposed the Blessed Sacrament and opened the church.” He added, “It is an act that ought to give courage to other priests.” A true and proper invitation to rebellion against the decisions of the Cardinal Vicar by a cardinal who clearly spoke after being inspired by the bishop of Rome, Pope Francis.

At this point it was inevitable that there would be an about-face by the “fallen from grace” Cardinal De Donatis – while Cardinal Bassetti for the moment pretends nothing is happening. The Cardinal Vicar issued a new decree that does not simply correct but completely changes the perspective with regard to that of just a few hours earlier. The decree of closure cited as its motives the “common good” and the “sense of belonging to the human family.” But in the new decree of reopening we learn that the Church also has another mission: “Every ecclesial precautionary measure ought to take into account not only the common good of civil society, but also that unique and precious good which is the faith, above all that of the common faithful

"The official narrative should therefore foresee that at this point De Donatis will have a very short life in charge of the Vicariate of Rome, as has been the case for many others before. And this is followed by a second sensational passage. This time, the Cardinal Vicar decided he was not going to become the sacrificial lamb, and so, together with the new decree, he sent a letter to all the pastors of the Diocese of Rome in which he explained all the reasons for what happened, laying the responsibility for the order to close all the churches at the feet of Pope Francis. His letter to the pastors begins: “In an unprecedented decision, having consulted our Bishop Pope Francis, we published yesterday, March 12, the decree that ordered the closure of our churches for three weeks.”

The bomb has been dropped. The letter goes on to present a series of considerations to justify that choice and then explains the turn-around of March 13: “A further consultation with Pope Francis this morning prompted us to consider another requirement: the closure of all of our churches can cause disorientation and confusion. The risk is that people feel they are even more isolated. This is the reason for the new decree that is being sent to you with this letter.”

Incredible: only after a delayed explosion did the Pope and his vicar realize the dramatic consequences that closing the churches has for the faithful. Not bad for those who made “shepherds who smell of their sheep” the refrain of this pontificate.

The reality is that the grumbling and stomachaches of many bishops over the suspension of Masses – which still remains in effect – exploded into the open with the decision to also close all the churches. To say nothing of the reaction of many of the faithful, of which The Daily Compass has certainly become an interpreter. As far as we know, on the evening of March 12 the Pope was hounded with phone calls from bishops and cardinals of the Curia seeking to convince him to reverse his decision.

Moreover, the closure of the churches was not an improvised initiative of Cardinal De Donatis, as is demonstrated by the fact that already on Tuesday, March 10, the order to close Saint Peter’s Basilica and Square had already been made, a clear indication of the direction that was being taken.

Now that the closure of the churches has been averted, the spectacle of the church hierarchy in a state of confusion and total disarray remains, with dramatic consequences for the Church throughout the world. The unfortunate decision to suspend Masses in Italy is now becoming an example that other bishops and bishops’ conferences are following, from the United Kingdom to the United States, even in health conditions far less dramatic than the situation in Italy.

At this point other bishops ought to take courage and restore Masses with the faithful, obviously following all of the requested prudential directives and in a common sense manner, as we have repeatedly suggested in these days. This would be the best contribution that the Church could now make to the common good.