A 2008 film by Uli Edel tells the story of the Baader Meinhof gang, the future Red Army Faction (RAF), the German equivalent of the Red Brigades. In an undervalued scene, the true meaning of the revolution is expressed: “Sexual liberation and the anti-imperialist struggle are one and the same thing!”. De Sade spread the same message during the French Revolution. 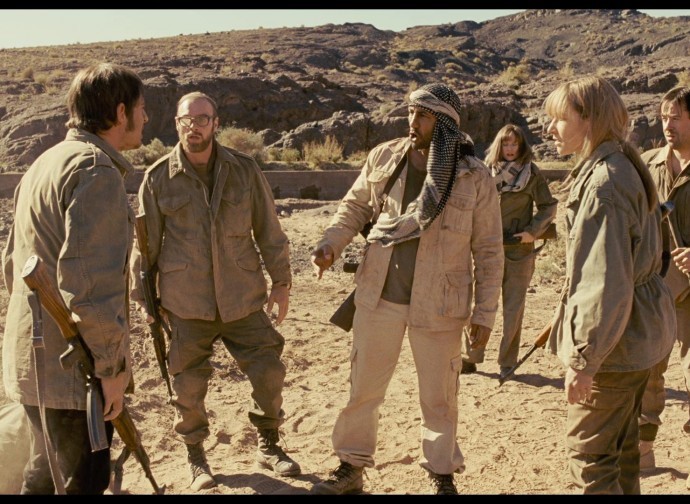 The 1968 protest movement in Germany lasted as long as it did in Italy, and ended in the same way: with terrorism. The evolution of this revolutionary process is narrated in an important German film entitled The Baader Meinhof Gang (2008); a film that won the Rome International Film Festival ward and was nominated for an Oscar and a Golden Globe. The director Uli Edel, also directed the famous Christiane F. - We, Children from Zoo Station (1981). The director’s focus is on the terrorist group that gives the film its title and that formed around Andreas Baader and the journalist Ulriche Meinhof, later taking the name Rote Armee Fraction (Red Army Platoon), RAF. Obviously, the story ends with a series of deaths, officially suicides.

In 1970, Andreas Baader, a fugitive after a trial for arson, was arrested and imprisoned; the rest of the group organised his escape and expatriation. Baader, together with Meinhof and other members of the group, went to Jordan for a period of guerrilla training by the Fatah, the Popular Front for the Liberation of Palestine (FPLP) and the Palestine Liberation Organisation (PLO). It is at this juncture that one of the most significant scenes of the film takes place.

During a break in training, the Germans climb onto the roof of a building in the training camp to rest and the girls sunbathe naked. Immediately the camp leader arrives and orders them to put their clothes on. This is the dialogue that follows:

- What does he want?

- He wants us to get dressed.

- So this is a repressive army.

- [Baader, to camp leader] Sexual liberation and anti-imperialist struggle are the same thing!

- But he can’t understand that, baby.

- [Baader, to camp leader] Fuc*** and shooting are the same thing!

This was perfectly understood by the Marquis de Sade, the most lucid and influential exponent of the Enlightenment, who focused on this point in a pamphlet entitled “Yet Another Effort, Frenchmen, If you would become Republicans” (i.e. revolutionaries) and included it in the pornographic and blasphemous novel entitled The Philosophy of the Boudoir (1795). In this brief writing, the ‘divine Marquis’ explains that the Revolution is a process that can never stop; and, above all, that it is not enough to have subverted (with the French Revolution) the social and political order. In order to be true revolutionaries, it is necessary to subvert the moral order; hence, to break every other law (murder, abortion...). Of these, the most important are the sexual ones. This is why de Sade incites rape, sodomy, incest and orgies. Once the moral laws governing sexuality have been rejected, it is all downhill, the rest will follow. “Fuc*** and shooting are the same thing”, says Andreas Baader in the film. It follows that the counter-revolution, i.e. the reaffirmation of Christ’s kingship on earth, also and above all passes through chastity. Therefore one must be free to oppose the Revolution, with a clear conscience.

In this regard, I recall some moving episodes of the fight against the Revolution fought by the workers of the Gdansk shipyards in August 1980. First of all, they decided that no vodka, the poison that the state lavished on the population during the Soviet regime, would enter the shipyards. Knowing how widespread this drug was in Soviet Poland, I can only imagine what it cost to give up this meagre comfort. The amazing thing, however, was the reaction of the city: when the news spread, the whole town, in a gesture of solidarity, made the same sacrifice and gave up Vodka. According to the chronicles, there was not a drop of liquor to be found in the entire city.

Secondly, they asked some priests to enter the yards and lined up for confession. They had realised that, with a guilty conscience, one cannot accomplish anything of value or significance. The film The Baader Meinhof Gang is truly a significant film if it at least fixes this fundamental concept in the viewers’ minds.