Psyche & Prozac: could a side effect be behind the massacres?

Racism, the spread of weapons, social distress. But, what if there were something more? There are many causes behind the US massacres. But there is one that is never analysed: killing is not easy, it requires large quantities of drugs to be taken to commit one. Many of the school killers have a history of psychiatric problems. In fact, the Prozac leaflet states that... 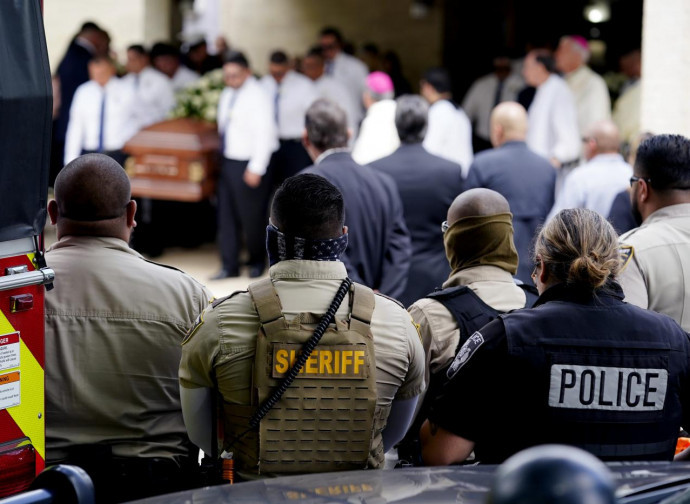 24 May 2022, Uvalde, Texas. Eighteen-year-old Salvador Ramos enters a school armed with an assault rifle and kills nineteen children and two teachers. The campaign to ban gun ownership restarts with the support of President Biden; conspiracists cry ‘false flag’. Indeed, there is no shortage of odd coincidences: two months before the massacre, a drill had been held in that very school, simulating the entry of an armed assassin into the institution; and General (retired) McInerney had posted on his Telegram account, more than 24 hours before the shooting, a message in which he called for the presence of the National Guard in schools [image]; it also appears that the police waited over an hour before intervening.

Two days after the Uvalde incident there was another shooting of unarmed bystanders in Seaside, California; then in West Virginia. Not even two weeks before the Uvalde shooting, there had been another. Another 18-year-old, Payton Gendron, entered a supermarket in Buffalo (NY) armed with an assault rifle and, filming the scene with a video camera, killed ten people. As I write, news is breaking of another school shooting in New Orleans.

Why is it that, in the United States, these incidents occur with staggering frequency? It has been calculated that it is the country with the highest number of gun homicides in the world, more than 12,000 per year, about 33 per day. How is this possible? What is the cause of these seemingly senseless massacres? The lone lunatic, the media’s usual explanation for these incidents?

The excessive availability of weapons, as the US democrats claim? Is it a conspiracy, are these young people plagiarised and programmed to kill?

These same questions were asked by the controversial US documentary filmmaker Michael Moore, who made the documentary Bowling for Columbine in 2002. The occasion was yet another mass shooting in a school, this time in Columbine (CO). On 20 April 1999, two former students, Erik Harris and Dylan Klebold entered the Columbine High School armed with guns and killed twelve students and a teacher, and then took their own lives. Moore, in the documentary, reviews all the possible causes of these incidents, from the presence of guns (but guns also exist in other countries), to the coexistence of different cultures and ethnicities (whites arm themselves to defend themselves against blacks and Hispanic-Americans), poverty, and social degradation.

None of these explanations fit other countries, e.g. neighbouring and similar Canada. Moore therefore leans towards the permanent climate of generalised terror induced by the media, who continually alarm the population and induce them to become defensive. The interview with Charlton Heston, Hollywood actor and activist of the National Rifle Association (NRA), a gun industry lobby, is particularly interesting.

At first, Heston justifies the spread of guns with racial conflicts; then, after some reflection, he argues that the United States has a history of violence, that violence is part of the country's cultural foundations. Moore is not satisfied; he replies that the UK, Germany, and other countries also have a violent history, but what happens in the US is not even remotely comparable. The question, therefore, remains open.

There is, however, one thing that does not add up. Killing, even in war, is very difficult (in spite of what you see in the movies) and few succeed. It is so difficult that armies have always used drugs in industrial quantities. The ancient Greeks and Romans used them (wine), the Vikings (hallucinogenic mushrooms), the Amazon warriors (coca), the Nazis (methamphetamine), the jihadists (phenitylin), the Americans... (Łukasz Kamienśki, Shooting up. History of the military use of drugs, UTET 2017). Drugs counteract fatigue and lack of sleep, raise the threshold of pain and, above all, break down the moral barriers to killing a human being. But if it is so difficult in war, how much more so must it be with defenceless people, with children?

What if it became possible using the same method used by armies in war? This is the controversial thesis of Ann Blake-Tracy, according to whom school shootings are due to the side effects of SSRI antidepressants (Prozac, Zoloft, and others); even Michael Moore, who does not mention this sensitive subject in his documentary, supports it in a later video.

Is it possible? Indeed, many of the school murders have a history of social or mental distress. Furthermore, here is what the Prozac leaflet states: “When taking this type of medication, patients under the age of 18 have an increased risk of undesirable side effects such as suicide attempt, suicidal thoughts, and hostility (predominantly aggression, oppositional behaviour and anger)”.

Whatever the cause of these terrible episodes, there is much to ponder about the dark side of a nation with the ambition to lead the world.