Poland: What’s at stake in the Presidential Election

On Sunday, July 12, Poland will hold the second round of its presidential election. The contenders are the incumbent President Andrzej Duda and Rafał Trzaskowski. The stakes are enormous: the election will decide whether Poland will remain a nation faithful to traditional values centered on the family or become another country subjected to the dictatorship of the politically correct. 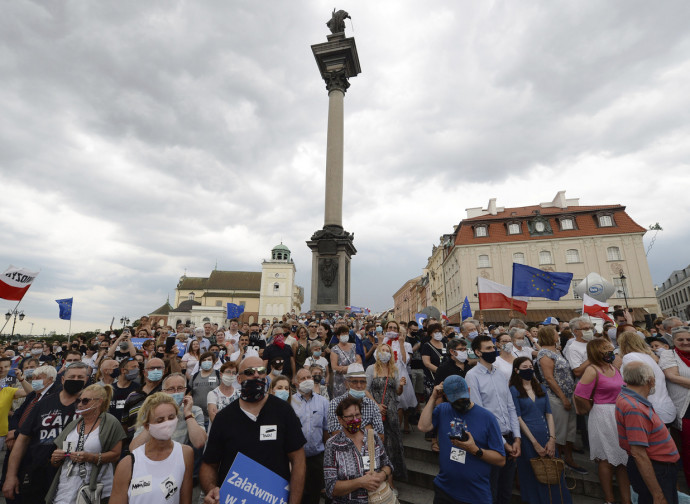 On Sunday, July 12, Poland is holding the second round of its presidential elections. The contenders are the incumbent president Andrzej Duda, supported by the Law and Justice Party (Prawo i Sprawiedliwość, PiS), and the present mayor of Warsaw Rafał Trzaskowski, of the Civic Coalition (Koalicja Obywatelska, KO). The stakes are enormous: the election will decide whether Poland will remain a nation faithful to traditional values centered on the family, or become another country subjected to the dictatorship of the politically correct. Because the stakes are so high, a large coalition has formed against the incumbent President, including international lobbies that fight against the natural family and the Catholic faith, that promote abortion and gender ideology, that want to see Poland under the EU (that is dominated by Germany and France) and subjected to the uncontrolled process of globalization and the loss of its national and spiritual roots.

During his term, President Duda has encouraged and supported the pro-family initiatives of the executive, and on June 10, right on the eve of the elections, he signed the Charter on the Family to guarantee financial support for it. On that occasion, Duda expressed his commitment to “protect the family,” emphasizing that support for the family, for motherhood, and for marriage understood as a union between a man and a woman is constitutionally guaranteed.

“The family is the building block of society, and without society there is no state,” said Duda. The president emphasized that the family is rooted in the Polish tradition and is part of the Polish “cultural code.” Speaking of his policy of financial support for families, he listed the programs already in existence: 500Plus (500 zloty, about 110 euro for every child, regardless of the parents’ income), 300Plus (300 Polish zloty for every child at the beginning of the school year), and MamaPlus (a program directed towards women who have 4 or more children and for this reason do not have a sufficient retirement savings; the state is committed to guaranteeing a minimum pension for such women). He further recalled his intention to introduce a holiday voucher worth 500 zloty for every child. He has also assured that he will give special attention to families raising children with disabilities. Little is said outside of Poland about the success of the family policy of the present Polish government, but it should be strongly emphasized that thanks to the 500Plus program the terrible problem of child poverty that afflicts children of low-income parents has been eradicated in Poland.

But the support being given to families is not only financial. Duda has declared his intention to defend the institution of the family understood as a union between a man and a woman, as it is defined by the Polish constitution, thereby excluding the possibility of approving other forms of marriage (same-sex unions). This vision of the family differentiates the incumbent president from his challenger Trzaskowski, a promoter of gender ideology (including in schools) a protector of LGBT+ organizations, who over a year ago, as mayor of Warsaw, signed a so-called LGBT Charter.

Obviously Duda’s position provokes the wrath and attacks of LGBT interests, even more virulently than when he declared that “the Polish Constitution ought to contain an explicit provision declaring that the adoption of a child by a person in a homosexual relationship should be forbidden.” Duda has already signed a special document, together with a proposal for the presidential modification of the Polish Constitution, that will be presented to the Sejm, the Polish Parliament.

As part of the presidential legislative initiative, Duda also presented a draft of legal changes to increase the role of parents in deciding what their children should be taught at school. If it becomes law, parents would decide who and what to teach their children in optional activities concerning humanistic topics, particularly education about family and social life. Without the consent of the parents, children will not be able to participate in certain lessons. In Poland, activities of left-leaning organizations have become ever more problematic, and parents have not had sufficient control of what has been happening in classes and the content of certain activities . The new law would effectively protect minors against, for example, early sexual initiation and gender ideology.

This year there in the presidential elections there is an “outsider” among the candidates, a man without a party behind him, Szymon Hołownia. He is a journalist, writer, and television host, relatively young (born in 1976), and an outsider to the political world. Hołownia presents himself as a believer, a Catholic with his own original ideas: he calls for a secular Poland, with a clear distinction between Church and state, even to the point of removing Crosses from public spaces. He has further promised to close the chapel in the Presidential Palace and abolish the position of presidential chaplain. Hołownia, with his vision of “democratic” and “open” Catholicism, so well-known also in Italy, with lots of coverage in the liberal media and many interested sponsors, attracted a sizeable part of the Catholic electorate in the first round, obtaining a significant result: 13.9% of the vote, enough for third place. His true objective was to divide Catholics and the right-wing so as to prevent the re-election of Duda in the first round. This objective was attained, and after the first round, Hołownia threw off his mask, throwing his support to Trzaskowski in the second round.

After the turning point of 1989, a massive process of privatization began in Poland: factories, banks, services, and real estate assets often passed into the hands of the old communist guard, but primarily they passed into foreign hands. This process did not spare the media outlets that were previously owned by the state: they were privatized. But the extent of the phenomenon is unimaginable: according to the latest data, about 75% of Polish media belongs to foreign interests, two-thirds of which are German. Among the German groups, in the first place there is the Bauer group from Hamburg. There is also the Swiss-German giant Ringier Axel Springer that publishes Fakt, the most widely-published newspaper in Poland, the weekly magazine Newsweek Poland, and the monthly Forbes, but also the most widely read sports newspaper Przeglad Sportowy.

The regional press is instead dominated by the editorial group Polska Press, which belongs to another German giant, Verlagsgruppe Pasau. As may be deduced from these facts, it is principally the Germans who control the media in Poland: local newspapers, national newspapers, and electronic media. The attacks on President Duda have been issued from these media. Can we speak of true democracy when the “fourth estate” is in foreign hands? The question is even more pertinent if we consider that German economic, political, and ideological interests do not always coincide with Polish national interests.