Europe is taking advantage of the crisis at its borders and intends to starve Warsaw. Belarus is deliberately pushing immigrants to Eastern European borders, especially Poland’s, in retaliation against EU sanctions. Therefore, Poland is serving the interests of all members of the Union. Just two days ago, the European Parliament’s major parties sent the Commission a request to suspend the Recovery Plan, essential for the reconstruction of the Polish economy post Covid. The same reason is always given, the reform of the judiciary which, according to the European parties, "violates the rule of law". Hungary is next on the list. 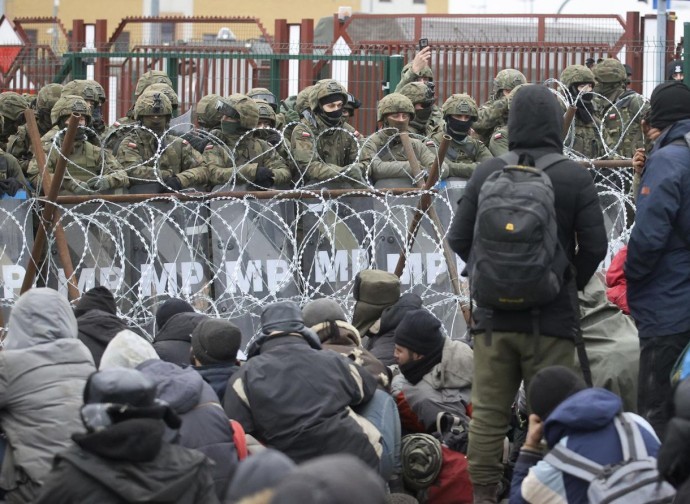 Europe is taking advantage of the crisis on its borders and intends to starve Warsaw, it’s exactly what happened in the last century when the Nazis and Communists invaded it. Two days ago, another deplorable page was added to the chronicle. The situation changed radically last week, making the threat of a breakthrough at the European borders by 'hordes' of poor migrants trafficked like pieces of meat from Afghanistan, Syria, Pakistan, Iraq apparent to everyone.

But, when faced with requests for European aid, to build 'physical barriers' along their borders, the growing number of injured Polish soldiers and sanctions against Belarus by Poland and the Baltic countries, Europe decided to respond with a stab in the back, it is preparing to cut off Polish funds. Shame is a word too kind to describe the feelings of disappointment that Brussels’ decisions provoke.

Only two mornings ago, a piece of news, stood out, totally beyond belief, was published on the Euractiv website: Group Leaders of the majority parties in the European Parliament (Popular, Socialist, Liberal, Left and Green) had sent an urgent letter to the European Commission with the request to block the Recovery Plan funds for Poland (€ 23 billion in grants and € 34 billion in low-interest loans). It reads: "A government that denies the primacy of EU law and violates the principles of the Rule of Law cannot be deemed trustworthy of fulfilling the commitments and obligations under our legal instruments ... of national recovery and resilience plans ... Our demand must not be seen as punitive against the people of Poland, but as a means to support the restoration of the Rule of Law in Poland.”

Is it clear? Basically, the Poles can be starved for their own good until they change their government. Then, a few hours later with a new decision, the European Court of Justice sanctioned the 'illegality' of the reforms to the Polish judicial system, this time picking out the aspects relating to the transfer of judges from one court to another which, according to their judges, could be politically motivated, given that the Minister of Justice is also the Attorney General who decides the transfers (Judgment in joined cases from C-748/19 to C-754/19 Criminal proceedings against WB and others).

Obviously, the judgments of the European Court, as well as the unprecedented demands of the European parliamentarians in recent weeks against Poland, follow the 'indications' suggested by ultraliberal 'think tanks' financed by the usual philanthropists, Soros in the lead. The objective is very clear: Poland does not have a 'rule of law', all the judges of any court (including the Constitutional Court) are illegitimate, the elected rulers must go if they want what’s good for the people that we, European institutions, claim have the right to represent exclusively.

On the same day, another decision, not to be overlooked, was taken by the European Court of Justice, which 'suddenly' ruled against Hungary in favour of the Commission (Judgment in case C-821/19 Commission / Hungary on Configuration as crime of supporting asylum seekers). It refers to the 'Stop Soros' law of 2018, which criminalises NGOs that support the human trafficking of illegal migrants seeking 'asylum' on the Hungarian border, it violates European standards and should be eliminated or radically changed.

The response of the Hungarian government was not long in coming, “we will continue to help migrants in their countries of origin, migration to Europe must be stopped and the future of Europe must be based on families. We reserve the right to take action against the activities of foreign-funded NGOs, including those funded by George Soros, which seek to gain political influence and interference or even promote migration."

It’s not surprising that an escalation of the European Commission’s war against Hungary is also not only to be expected but has already been appealed by the Commissioner for Justice and the Rule of Law Didier Reynders, who had meetings in Budapest last weekend. He stated that "there has been no improvement in the 'rule of law' in the country, the judicial system is compromised, the freedom of the media is limited and LGBTI people suffer severe discrimination in the country".

Neither Poland nor Hungary have to date received the go ahead from the Commission and the Council for the approval of their Recovery Plan. But, the Polish situation is much more serious, given the circumstances that the country is experiencing, attacked head-on in a 'hybrid war' promoted by Belarus (and tolerated by Moscow) against the sanctions that Europe had decided following the post-electoral repression of the Minsk government in September last year. It is clear to everyone that Lukashenko's war which is gambling with the lives of migrants is really against Europe, but Europe, which only days ago took new measures against Belarus, is intending to 'starve' Warsaw (and is preparing to cut ties with Budapest).

By the facts and for the decisions taken in Brussels, Belarus and Poland, that is the tyrant Lukashenko and the elected Morawiecki, are being put on the same level (economic sanctions and blocking of Recovery funds). Not even Merkel and Macron's talks with Lukashenko and Putin have managed to awaken a sense of responsibility in European leaders. Only the Visegrad countries in Europe have responded to the request of Poland and the Baltic States for help and support to build border walls against human traffickers.