The EU is attacking Hungary and Poland against the spirit of its own Treaties. The European Parliament wants to impose "LGBT rights" on Hungary and is now challenging Poland’s ban on selective abortions, which are matters of national jurisdiction. The two Central European nations have formed a coalition in the Budapest Pact in order to be respected by Brussels. Viktor Orban responds in tone to George Soros who is a great proponent of the EU. 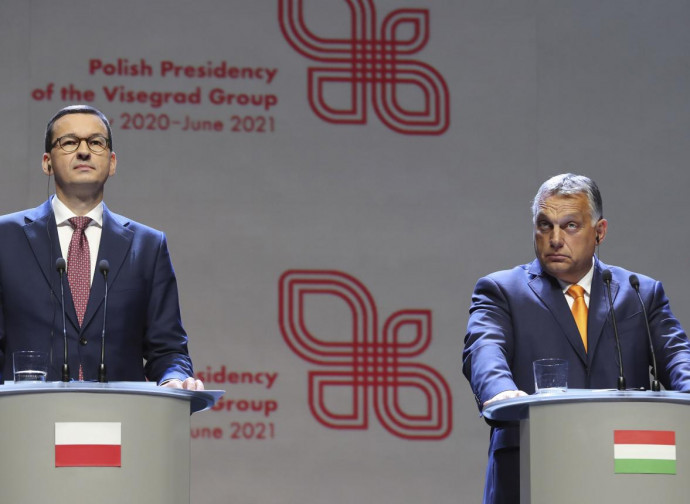 The European Union is now in disarray. There’s no longer any respect neither for the law nor for common sense. What’s more, revolts against fellow EU member nations are even being financed, which amounts to suicide. It is well known that Brussels has been targeting Poland and Hungary for months. This is due to the anti-Christian fear of any popularly elected government which cares deeply that public policies should promote the Christian common good, starting with the protection of life and motherhood.

The furious attacks on Warsaw and Budapest that we have commented on over the years, months and weeks have been repeated intensively lately, breaking all records for their irrational and suicidal blind fury.  This is the stance Europe is taking towards Poland and Hungary, thinking that the sacrifice of these countries can help solve the existential crisis it currently suffers. We have spoken of the temptation of violating European Treaties for the sake of sanctioning these two Christian countries. This week it was the European Parliament’s turn to sound the charge. Following an initial meeting seeking new financial mediation (unsuccessful) of its Multiannual Budget and associated obligations to the governing bodies associated with the EU Commission and German presidency, a whole host of socialist, liberal, popular, green and leftwing MEPs, came down hard on Poland and Hungary with two Resolutions.

A non-binding but very significant instrument in the European climate of terrorism is Resolution n. 2790 of 13/11/2020 “regarding the impact of COVID-19-related measures on democracy, the rule of law, and fundamental rights." Resolution 2790 confirms the serious violation of the European Union's competences, as perpetrated by Parliament, but also goes further in the explicit direction of claiming privileges for LGBTI+ people. It reads: "Equal access to health care...is potentially at risk because of the measures taken to stop the spread of COVID-19...especially for groups of people in vulnerable situations, LGBTI+ persons,... all migrants, including undocumented migrants, asylum seekers, refugees , ethnic groups and other minorities".

The resulting EU Parliament  Recommendation (see par. 17) "calls on Member States to continue their efforts to combat homophobia and transphobia, as the pandemic has exacerbated discrimination and inequalities suffered by LGBTI+ people." The same Resolution echoes the lie of the century, a la Joseph Goebbels, in the hope that “the right to abortion” will be accepted as the unquestioned truth. It calls on "Member States to effectively guarantee access to sexual and reproductive human rights (SRHR), particularly access to contraception, including emergency contraception, and abortion assistance,... online consultations, and access to early pharmacological abortion at home." It’s shameful that with these documents the European Law and Treaties have been now virtually torn to shreds. Indeed, there is no European authority in these matters.  According to Article 35 of the Nice Charter, as referred to in the resolution, it is the exclusive authority of each Member State to manage access to preventive health care and securing medical treatment of its own citizens.

A few days after this irreversible parliamentary decision, which should have been rejected by any study commission and the President of the Assembly, on November 26 the EU Parliament approved a Resolution condemning the sentence of the Polish Constitutional Court which had established the unconstitutionality of all selective abortion in Poland. That’s right: the European Parliament, in just one week, explicitly violated not only its very own European Union Treaties (without which the EU Parliament wouldn’t even exist), but it also allowed itself to sanction the Constitutional Court of a country for a decision upholding its own National Constitution.

The overwhelming majority of the European Peoples Party (EPP) voted in favour of both documents, thereby demonstrating that they have all but lost their bearings and are now sadly acting in blatant contradiction with the EEP statutes, manifesto and founding values. It is striking that among the  ‘considerations’ included in the texts are statements of UN consultative bodies which are absolutely in favour of abortion and not, instead, the simple observation that European law, European Treaties, UN Conventions and, ultimately, the flag-waving 'European values and the rule of law' are all not only contrary to 'abortion law', but also respectful of the Constitutional Law of sovereign countries, as in Poland. Polish parliamentarians, in fact, have denounced the document as a veritable basis for constitutional rebellion, violent protests and acts of vandalism in their own country. It is now well understood the European Parliament supports the rebellions and violence of bought-out mercenary groups in a country of the very same European Union.

Anyone who thought that such decisions might have intimidated Poland and Hungary should take note of the 'Budapest Pact' (see photo) signed by Viktor Orban and Mateusz Morawiecki on the same day of November 26th when their two countries were forced to reiterate concepts which are obvious, but nonetheless increasingly contradicted by Parliament and European institutions. They stated:

"We remain committed to promoting the European values of our Treaties. We are searching for solutions to make resources available to all European countries as quickly as possible. The proposed solution, involving a link between resources and verification of the rule of law, has not been shared by us since 2018 and the draft agreement on this issue does not comply with the agreement of the Heads of State of last July. The current solution, which we want to avoid, undermines the rule of law and makes it subject to political judgments and violation of our Treaties. We will continue working according to a principle of faithful collaboration and a search for solutions that will modify the draft of the pre-agreement. No proposed solution will be accepted by Poland or Hungary without the consent of either country".

Chancellor Angela Merkel is possibly the only politician left who still has her head on her shoulders. In a crescendo of unprecedented European follies, Merkel had a long conversation with Polish Prime Minister Morawiecki on the morning of Friday, November 27, perhaps in an attempt to test the strength of his alliance with Orban. Warsaw’s response was clear: 'If we don’t return to the unanimous agreement signed by everyone in July and continue such violent stances, threats and treaty violations, our veto, including Hungary’s,  remains on the table. We will not sell out our dignity, tradition, national values and sovereignty by means of Brussels' blackmail.”

Regarding George Soros, the only true playmaker of European institutions and politics, who had 'dictated” the EU Commission and Parliament’s stance against Poland and Hungary last November 18, Viktor Orban replied inviting Europe not to succumb to Soros’ objectives and network. An article from last 25 November cites his firm and decisive defence of Europe against intolerant and totalitarian philanthropic neo-colonialism. As confirmation of what an open and supportive society holds in store for European citizens, not only did the European institutions this week show their  outright contempt and lack of respect for their founding treaties and general principles of the rule of law, but they also took it a few steps further – perhaps cutting off the remaining branches (after already removing its Judeo-Christian roots) on which Europe had firmly depended.

Next December 10 the University of Trieste will hold a conference on the "Crisis of the Rule of Law in Poland and Hungary". Guess who’s co-financing the conference: it's the same Europe that, through the Erasmus+ Program, pays for conferences to mock fellow EU member states. The conference flyer reads: "In the webinar’s first session, the aim is to illustrate the impact of the illiberal degeneration of Poland and Hungary on the institutions... In the second session, the webinar aims to highlight the role of the mass media in communicating the phenomenon of 'sovereignty' in the countries of Central and Eastern Europe". Europe violates treaties, supports thugs, incites anti-constitutional rebellion and finances, with money taken from of its members and is making a mockery of its sovereign and member countries. Is there anything else we need to know? The perfect suicide plan is  set and it is clear who the instigator is.