"To declare that Pope Pacelli had no intention of saving the Jews is very serious, because it is also a moral judgment." "All the existing documentation denies the alleged insensitivity to the suffering of the Jews." "Ideological reasons behind the black legend on Pius XII." "The beatification process has never stopped, there are some presumed miracles under study." Emilio Artiglieri, president of the Pope Pacelli Committee - Pius XII Association, speaks. 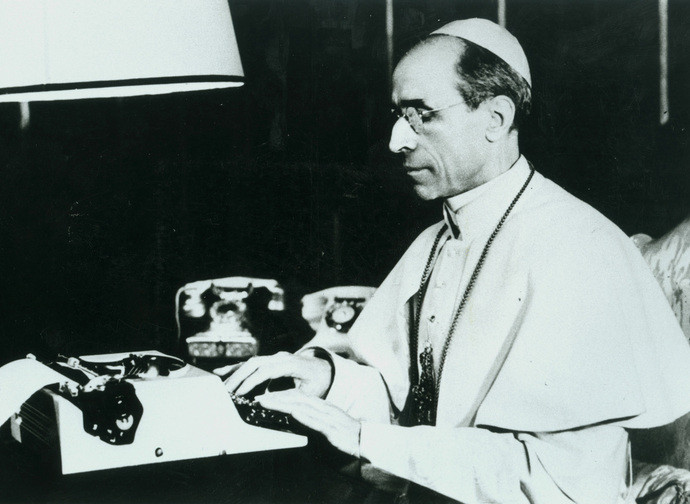 As was foreseeable, the opening of the Vatican Archives on Pius XII has also reopened the discussion about the role played by Pope Pacelli during the Nazi occupation and the Holocaust. The figure of the venerable Roman pope, however, rises above such contingent controversies, for what emerges is a splendid profile of holiness. On the occasion of the opening of the archives and in view of an upcoming symposium to be held in Rome on March 16, The Daily Compass interviewed Emilio Artiglieri, an advocate of the Roman Curia and President of the Pope Pacelli Commitee/Pius XII Association, founded in 2009, which is sponsoring the meeting.

Advocate Artiglieri, in your opinion, what are the most interesting aspects that may emerge from the new opening of the archives on the venerable Pope Pius XII?
This is an all-encompassing initiative, which involves numerous archives of all the institutions of the Holy See, from the Secretariat of State to the Apostolic Penitentiary to the various Congregations. These documents cover the entire duration of the pontificate of Pius XII and so give a comprehensive reading. I am convinced that we need to take account of the pastoral action of Pacelli in all of its complexity, including his relationship with the Jewish world, first as Apostolic Nuncio in Germany, then as Cardinal Secretary of State, and finally as Pope.

In this regard, some controversial declarations have already emerged, such as that of the head rabbi of Rome, Riccardo Di Segni, who claims that Pius XII had no desire to stop the deportation train. What response is there to such accusations?
It is only by means of an all-comprehensive vision of the pontificate of Pacelli that one can better understand his personality and his work. To declare that the pope had no intention of saving the Jews is very serious, because this is not only an historical judgment but also a moral one. The archives that have already been opened, as well as the best biographies, clearly deny that Pius XII was absolutely insensitive to the suffering of the Jews. If we look at these sources, we discover that Pius XII was a man who was both very sensitive and also very tormented, that he had to deal with very delicate questions of conscience, and faced with these he asked himself: should I speak or not speak? Silence, in and of itself, may be a sin of omission and thus blameworthy, but, in many other cases, silence can work for the good of others. The pope himself was aware of the fact that, one day, somebody could use his silence against him, but it was still the path that he chose in order to avoid further tragedies and to save the lives of thousands of Jews. To this must be added the fact that Catholic doctrine was intrinsically incompatible with the ideas of national socialism. The Nazis saw the Church as an enemy and it is well known that Pius XII performed exorcisms against Hitler. How can one then think that there was a connivance between Pope Pius XII and Nazism?

And yet, in the immediate post-war period, there were numerous and clear declarations of esteem and gratitude from the Jewish communities towards Pius XII. What was the disturbing element that later contributed to the growth of the black legend of the pope who was an accomplice of the Nazis?
There were numerous motives, but one may say that the prevailing reason was the action of the Soviet secret service, which intended to support the thesis of the German playwright Rolf Hochhuth, who in his play The Deputy represents Pacelli as a man who was absolutely cold and indifferent to the plight of the Jews. It is clear that behind all this, there is an historical context in which Pius XII was seen as a symbol of a Church of the past, linked to outdated principles, with which people wanted to cut ties.

Are you alluding to the climate created during and after the Council?
Yes, but in that context it should be borne in mind that Saint Paul VI wanted to jointly open the causes of canonization of both Pius XII and John XXIII, precisely in order to emphasize the continuity between them with respect to the event of Vatican II, which meant neither the end of the “old Church” nor the beginning of a “new Church.” Pope Montini announced the opening of the two causes together right during the sessions of Vatican II, leading to applause from the council fathers. Moreover, Paul VI was a close collaborator and a great admirer of Pius XII, whom he defended several times, praising him publicly.

Do you believe that the opening of the archives will enable the cause of canonization to proceed more quickly?
It should be pointed out that the cause has never stopped. Ten years ago, Benedict XVI recognized the heroic nature of Pius XII’s virtue, therefore the human judgment of the Church on Pius XII is now defined. The last step before his beatification would be the recognition of a miracle: at the moment there are various cases being studied and some seem to be very significant, however I don’t want to speak too soon in this regard. I should add, however, that devotion to Pius XII was immediately very strong: it is thought that the first prayer directed to him, printed on a holy card, was written at the end of 1958, thus very soon after his death.

What are the human qualities that paved the way for the holiness of Pius XII?
This question is the specific object of the studies made by the committee I preside over. In my book Pio XII. Il papa della carità (Edizioni Velar), I have sought to show the human side of Eugenio Pacelli, from his youth and adolescence. As a student one of his close friends was a young Jew, Guido Mendes, with whom he shared many interests and ideals. They both were often guests at each others’ houses. Pacelli always showed great interest for Jewish culture and religion, to the point that one day he asked his friend to show him a book by rabbi Ben Herzog. Their friendship lasted many years. In 1938, when the racial laws were promulgated, Pacelli, who was then Secretary of State, made every effort to help the Mendes family, obtaining their transferral to Switzerland and then to Palestine the following year. All this goes to show that Pius XII was anything other than insensible to the plight of the Jews....
Humanly, Pacelli was characterized by an extraordinary dedication to work, as is shown by the impressive mass of writings, including encyclicals (43 of them), magisterial documents, and official discourses. When he received in audience the most diverse human and professional categories of people (for example, doctors, midwives, lawyers, scientists, workers, soldiers, and even butchers) he never gave extemporised speeches but always prepared written remarks about topics that interested them. Pacelli manifested this laborious spirit despite the fragile health that afflicted him ever since his youth, to the point that, after a brief period of attending the Collegio Capranica, he was unable to attend lectures at the seminary regularly.
Finally, we should recall the profound Marian devotion of Pius XII, identified by some as “the pope of Fatima” because he was ordained a bishop on May 13, 1917, the day of the first apparition of the Blessed Mother to the shepherd children. He was also the pope who proclaimed the dogma of the Assumption of Mary, the title of Mary Queen of Heaven and the universal cult of the Immaculate Heart of Mary.