Perugino, the rise and fall of a genius who became outdated

Perugino's artistic parabola is not enough to obscure his genius and the magnificence of his works, which still enchant us today, half a millennium later, and will continue to do so for generations to come. For instance, the Baptism of Christ, the beginning of Jesus' public life frescoed in the Vatican. 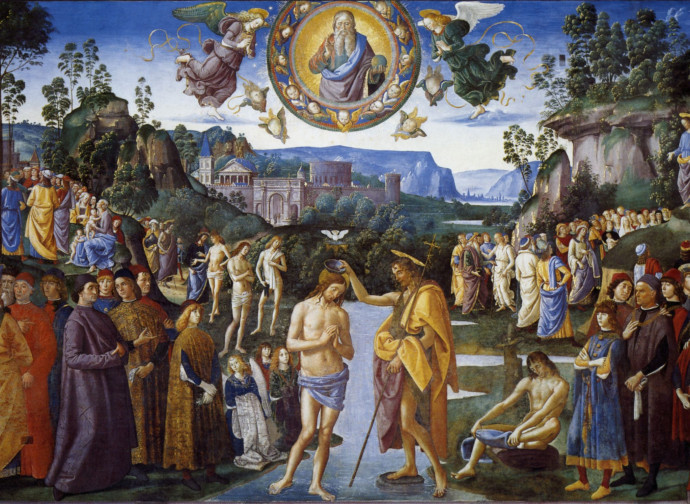 After having analysed some of the few works of art depicting Jesus' childhood and adolescence, we move on to a chapter so rich that we are spoilt for choice: Jesus' public life. Although this period only covers less than three years of the Redeemer's life (from baptism to crucifixion), it has been a source of inspiration for myriad artists over the centuries.

Since there is so much subject matter, we will choose only works and artists that are special for some reason.
Today we will travel back in time to a morning in 1480: we are in St Peter's, in the Chapel of the Conception. A large man stands in the middle. With his head raised, he gazes at the frescos in the apse, amazed by so much beauty. His eyes sparkle and a smile lights up his face: he is Pope Sixtus IV, born Francesco della Rovere (1414-1484). One pace away from him is the author of that marvel: Pietro Vannucci, known as Perugino.

Born around 1448 in Città della Pieve, near Perugia (in the Papal States), he was the son of Cristoforo Vannucci, who, realising the boy's talent, had him study the techniques of fresco painting and drawing with an artist in the town.

Perugino trained by studying the works of Piero della Francesca and Verrocchio, whose pupil he was in Florence between the end of the 1560s and the beginning of the 1570s: there he discovered the Flemish landscape and naturalist portraits. When his apprenticeship was over, the artist set up his own business and began to receive orders, the first being from the nuns of the Convent of San Martino, for whom he painted Saint Jerome. He had pupils who would become illustrious painters, such as Raphael. He worked non-stop in various cities (Perugia, Florence, Rome, Cremona, Venice, Mantua) producing masterpieces, to the great satisfaction of his clients, while his fame grew along with the importance of his clients.

And so we return to our story, to that morning in May, which would mark the beginning of a collaboration whose fruits have come down to us and will outlive us. At that moment, the Pope - although he knew of the painter's fame, which was the reason why he had entrusted him with the Chapel of the Conception - realised that he was dealing with a genius, not only for his talent, but also for his organisational skills: he had managed to do the job in record time. And he made a sudden decision: he would entrust him with the direction of the work on the Papal Chapel - later called the Sistine Chapel, in honour of the Pope. For this project the Pontiff had already contacted and hired three of the greatest artists of the time: Sandro Botticelli (1445-1510), Cosimo Rosselli (1439-1507) and Domenico Ghirlandaio (1449-1494). 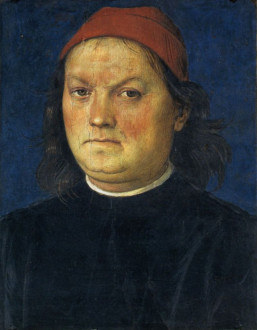 They had received the prestigious commission to decorate the walls of the important new premises in the Vatican with ten narratives from the Testaments. Perugino, in view of his new assignment, was able to reserve the main scenes for himself in the series of Stories of Moses and Christ: the Delivery of the Keys to St. Peter and the Assumption of the Virgin (the latter later destroyed because it was replaced by Michelangelo's Last Judgement).

Perugino, together with his assistants (considering the vastness of the work), painted at least six scenes, of which three are preserved today. One of these is The Baptism of Christ, which is the first on the wall to the right of the altar, looking towards it, and is in parallel with the Departure of Moses for Egypt and Circumcision of his Son Eliezer on the opposite side.

The painting immortalises the beginning of Jesus' public life: His baptism.
We read in the Gospel of Matthew 3, 1-2 and then 13-17: In those days John the Baptist appeared and preached in the desert of Judea, saying: "Repent, for the kingdom of Heaven is at hand!"....  At that time Jesus went from Galilee to the Jordan to be baptized by John. But John wanted to prevent him, saying, "I need to be baptized by you, and you come to me?" But Jesus said to him, "Let it be for now, for it is fitting that we should thus fulfil all righteousness". So John consented. As soon as he was baptized, Jesus came out of the water, and behold, the heavens were opened, and he saw the Spirit of God descending like a dove and coming upon him. And behold, a voice from heaven said: "This is my beloved Son, in whom I am well pleased".

And it is precisely that moment that Perugino "photographs" in his work. The scene is set according to a symmetrical scheme, typical of the artist. In the centre, the River Jordan flows straight towards the spectator, up to the feet of Jesus and John the Baptist, who is baptising him, in the foreground. From the sky descends the dove of the Holy Spirit, sent by God above, represented within a nimbus of light with seraphim and cherubim and flanked by two angels in flight.

The landscape converges towards this symmetrical axis, with a symbolic vision of the city of Rome (a triumphal arch, the Colosseum and the Pantheon can be recognised within the walls). At either end are two secondary episodes, also marked by a symmetry that emphasises their doctrinal similarities: the sermon to the crowds by the Baptist (left) and Jesus (right). Also typical of the artist is the landscape that gently fades into the distance, dotted with slender trees: this became one of the most recognisable elements of the Umbrian school.

The artist's signature appears on the upper frieze: "OPVS PETRI PERVSINI CASTRO PLEBIS": it is the only signed panel in the Sistine Chapel.

After completing the work entrusted to him by the Pope, the artist returned to Perugia, continuing to work for illustrious clients. In 1505, he painted The Battle Between Love and Chastity (now in the Louvre) for the study of Isabella d'Este. Unfortunately, the marquise was not fully satisfied, marking with her criticism a decline that became inexorable for Perugino. It culminated in his dismissal on the spot by Pope Julius II, while he was frescoing the vault of the hall in the Vatican palaces, later known as The Fire in the Borgo. These paintings were later replaced by frescoes by his pupil Raphael.

The truth is that Perugino had simply become “outdated”: his once much admired style became obsolete, tired, and repetitive as he moved into the new century. He spent the last years of his life in the province of Umbria, in his workshop, which was still very active.

In 1524 he died of the plague in the Castle of Fontignano, while he was frescoing the Nativity scene in the parish church. His artistic parabola is not enough to obscure his genius and the magnificence of his works, which still enchant us today, half a millennium later, and will continue to do so for generations to come.