In an interview with the American website Crux, Archbishop Vincenzo Paglia, president of the Pontifical Academy for Life, denies the existence of non-negotiable moral principles and accuses those who use the right to life as a voting criterion of political exploitation. The implicit reference is to the American elections, but Paglia’s affirmations are consistent with an approach, by now consolidated, that distorts the fundamental foundations of Catholic moral theology. 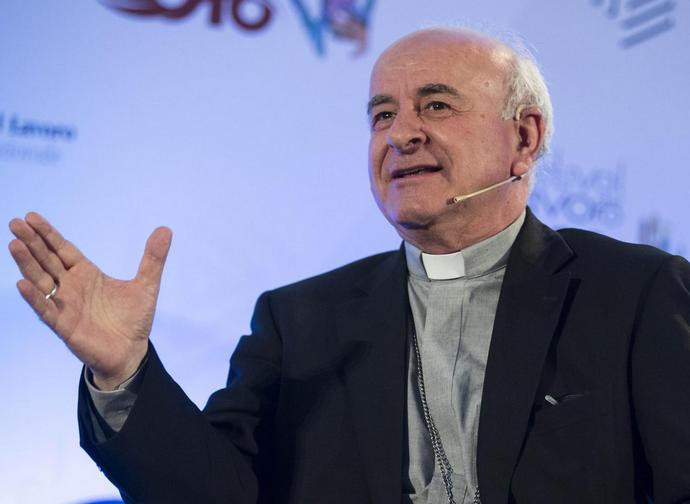 In his most recent interview with Crux (here) Archbishop Vincenzo Paglia, President of the Pontifical Academy for Life, corrupts the sense of Catholic moral theology with shocking affirmations. Before examining them, however, it will be useful to start with a premise.

Faced with the moral duty to vote in political elections, the first thing we have been taught to do is to see if in the party platform there are violations of the primary right to life. If is it written that a party supports abortion or euthanasia, it would not be morally possible to vote for this party. One cannot do good by means of evil.

Where do we find this teaching? In all of Catholic moral theology as it has always been taught (up until now). In particular we find it in the Doctrinal Note of the Congregation for the Doctrine of the Faith in 2002: A well-formed Christian conscience does not permit one to vote for a political program or an individual law which contradicts the fundamental contents of faith and morals.”

Catholics can never isolate one element from the overall context of the Church’s social teaching, because the common good is not made up of only one element; however there are “moral principles that do not admit exceptions” and commitment to them becomes “more evident and laden with responsibility.” The right to life is undoubtedly one of these principles, since the unborn child cannot enjoy any other right. The right to life thus has a fundamental priority, calling for absolute respect, and thus it is the first criterion in deciding how to vote. It may not be possible to vote for a party that defends the right to life for other reasons, but a party that denies it may never be elected for any reason.

This was the teaching of Catholic moral theology, until now. Now, in his interview with Crux, Archbishop Paglia denies all this and provides an opposing view. He thinks that “to instrumentalize some topic for political ends or for laziness [in one’s own] horizon” is harmful.” Using an ethical theme for political motives, such as the defense of life, is pushing ideology and exploiting moral principles. This is evidently said both for the politician who defends human life against abortion by the state as well as for the voter who assumes the defense of life as the principal criterion of voting. Both of these are said to be examples of ideology, that is, using a moral principle for one’s own interests. The Catholic voter must enter the voting booth leaving behind “moral principles that do not admit exceptions,” so that all parties are indiscriminately morally electable.

The reason given by Archbishop Paglia is that Catholics must commit themselves, together with others, to “a perspective of global bioethics, one that engages all the major topics that touch on life, of the individual and of the human family,” such that isolating one element of the defense of life, like the question of abortion, means exploiting the moral question for ideological motives.”

It is not clear how life can be defended in all of its manifestations without also defending it in each one of them, nor how it is possible to favor life in all of its manifestations while denying an absolute priority to the initial moment of life itself. There are undoubtedly many values to be pursued, but they are not an indistinct whole, they are not just a “bunch” of values, but rather an order of values, and every order needs ordering principles. Life is one of these, and thus it cannot be placed on the same level as others.

Paglia, instead, sees the set of moral values as an indistinct whole, like a sum or a list, and in proposing to follow them all together he falls into utopia, which is always exploited by partisan interests. How can one respond to the child in the mother’s womb who asks to live by saying that the values of life must all be pursued together?

Many observers have said that Paglia has spoken thus in relation to the coming American elections in support of Biden against Trump. We don’t find this difficult to believe. However, it is necessary to see in these declarations the steps being taken towards a global “rethinking” of all of Catholic moral theology. Paglia’s surprising interventions are actually consistent with each other, consistent with the new statutes of the Pontifical Academy for Life, consistent with absorption/transfiguration of the John Paul II Institute for Marriage and Family, consistent with the cancellation of the doctrine of non-negotiable principles from Catholic moral theology, consistent with many teachings of Pope Francis, who does not distinguish between popular movements, equally encouraging them all, and who claims not to understand even the meaning of the expression “non-negotiable principles.”

The renunciation of so-called non-negotiable principles, understood as ordered principles of moral nature, is (intentionally) producing very grave consequences. Archbishop Paglia undoubtedly knows this. If there is not something that can never be done – either by the politician or the elector – then everything can be done. If we can vote for all the parties, then the parties that win can do whatever they want. It will thus be inevitable that the elector, at the moment of the vote, applies that “balance of goods” that Veritatis Splendor forbids. It will thus be inevitable that those who are elected do the same once they are elected. More than a new “rethinking” of Catholic morality, it seems more like its destruction.