Padre Pio Brings Us Into the Mystery of the Baby Jesus

For the Saint of Pietrelcina, Christmas was the most beautiful feast of the entire liturgical year. Through his writings and the testimonies of those who experienced it with him, we discover the reason for his ineffable love, which led him to live the Holy Night completely taken up into an ecstasy of love. Beginning with the novena of Advent, which inflamed his spirit, to the procession with the Holy Infant caressed by his wounded hands, we also prepare ourselves with Saint Pio for the coming of the Lord. 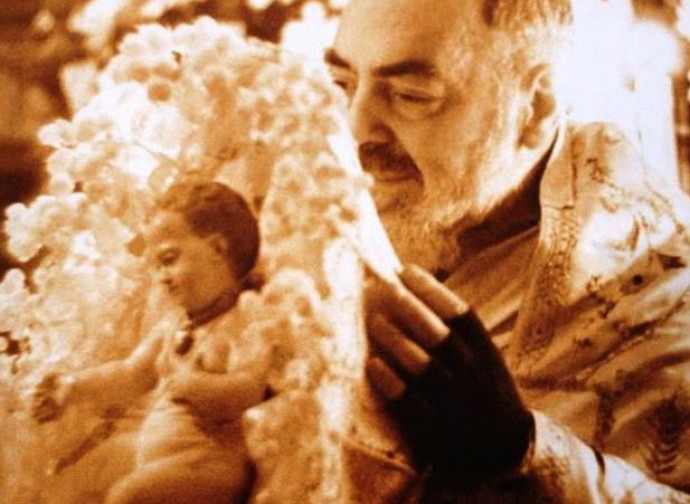 “All of the feasts of the Church are beautiful, it’s true that Easter is the most glorious… but Christmas has a tenderness, a childlike sweetness that captivates my entire heart.” And then he specified: “Easter is certainly the most important feast of the year. But I like Christmas better, [because] at Easter Jesus is crucified and this makes me suffer, whereas at Christmas the Baby Jesus is so sweet!”

The words of Saint Pio of Pietrelcina lead us powerfully into the mystery that we are about to celebrate in the Sacred Liturgy: the Nativity of Jesus. In fact: if we consider where his intimate union with the Crucified One led the Saint of Pietrelcina, and if we observe with what great ardor he ascended to the altar, there to relive in his flesh the suffering of Christ Crucified and Risen…well then, we really have to ask ourselves where the love of the Capuchin brother led him on the Holy Night, so as to make it, for him, his “favorite.”

The words of Father Ignazio da Ielsi, Father Guardian of the convent of San Giovanni Rotondo from 1922-1925, come to our aid. On a page of his diary dated December 24, 1923, he seems to have wanted to answer our question: “It is useless to try to explain with how much passion Padre Pio celebrated Christmas. He was always thinking of Christmas, and he counted the days until the next Christmas, beginning with the day after Christmas. The Baby Jesus had a most special attraction for him. It was enough for him to hear a child’s song, a lullaby, and his spirit was lifted up…so much so that when you looked at him he seemed to be in ecstasy.” 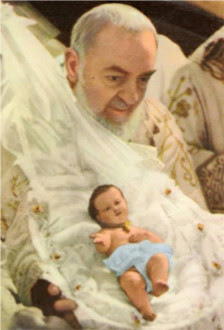 There is more. His fellow brother reveals: despite the humility of Padre Pio that rendered him completely incapable of asking for anything for himself, “he loved to celebrate the Midnight Mass of Christmas himself,” although this was the right of the house superior to decide. But his desire to preside over that special Eucharistic sacrifice was so great, and he prepared himself with so much passion, that none of his superiors ever dared to contradict him.

As Christmas drew near, Padre Pio was completely transformed. In fact, those who knew him and knew of the terrible physical sufferings and violent diabolical assaults that he was continually undergoing, immediately noticed the mysterious change that took place in him. But it is the Saint himself who explains why this happened, in a letter of December 17, 1914, sent to one of his spiritual daughters, the noblewoman Raffaelina Cerase: “At the beginning of the sacred novena in honor of the Child Jesus,” Padre Pio writes, “my spirit feels like it is reborn to new life: my heart feels that it has enough room to contain all of the treasures of heaven; my soul feels itself completely emptied out in the presence of this our God who has become flesh for us. How can we resist loving him always with new ardor?”

Behold the depth with which the Saint of Gargano penetrated into the mystery of the Love of God and behold thus the ultimate reason of such a transformation in body and spirit: he was all enraptured by the “humanized God,” as he often loved to call him, in harmony with the Apostle Paul (cf. Philippians 2:6-8).

And where did he see himself incarnate, this God of Love, if not in the very instant in which Padre Pio celebrated Holy Mass? The eyes of Padre Pio shone with tears and his cheeks grew flushed when, at the end of the Eucharistic Liturgy, he proclaimed in a loud voice the Prologue of Saint John: “And the Word became flesh / and dwelt among us.” Such was the theological foundation, which concluded the Eucharist in the Tridentine Mass, on which all of the special love of the Capuchin Saint for the Feast of the Incarnation was based. Here is the justification for the profound emotion and the mystical stupor which culminated in the perennial ecstasy of Padre Pio during all of the Holy Night. 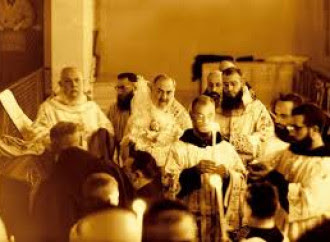 And then, the Mass. The Midnight Mass of Padre Pio, on the night of Christmas, was truly extraordinary. Hordes of believers overcame all sorts of obstacles in order to have the grace of participating: in order to have a vague idea, it is enough to know that, in order to be present at the solemn functions, it was necessary to venture out, in the dead of night, along the stony mule trail covered with snow and ice that led to the convent.

And yet neither the intemperate weather, nor the bitter cold, nor the long celebration that lasted until five in the morning, could dissuade those who sought Paradise in the eyes of the Saint during the night that was the most special of all nights. “At the end,” one of his brothers recounts, “Padre Pio put on the white veil woven with gold, incensed the statue of the Baby Jesus, and preceded by the altar boys and some of his brothers who held lighted torches in their hands, he carried it in procession from the choir to the altar and from the altar to the Crib, clutching the little cradle closely to himself…. Then, he offered the beloved statuette to the faithful to kiss. His face was radiant, luminous. His lips were full of joyful smiles as everyone kissed the knees or the little feet of the Baby Jesus. Then “with an open heart and a clear voice,” he united himself to the choir of his brothers and the faithful in singing Tu Scendi Dalle Stelle, the sweet Christmas carol composed by Saint Alphonsus Maria de’Liguori.

It is particularly beautiful then to listen to the testimony of those who learned to live the Christmas mystery at the side of the humble friar. Like Lucia Ladanza, one of his spiritual daughters, who travelled from Pietrelcina to San Giovanni Rotondo to spend Holy Christmas with her illustrious compatriot. In a page of her diary dated December 24, 1922, Lucia writes, “The friars had brought a large brazier into the sacristy, and many people had gathered around it to keep warm. We were reciting the Rosary as we waited for Mass. Padre Pio prayed right in the middle of all of us. Suddenly, in a halo of light, I saw the Baby Jesus appear in his arms. The face of the Padre was transfigured, his eyes turned towards that figure of light that he held in his arms, his arms open in a surprised smile. When the vision vanished, the Padre realized, from the way that I was looking at him, that I had seen everything. He came up to me and told me not to say anything to anyone.”

But Lucia was certainly not the only one to witness similar manifestations of the divine in the life of the Capuchin, which on the contrary repeated themselves continually, in particular as Christmas drew near. 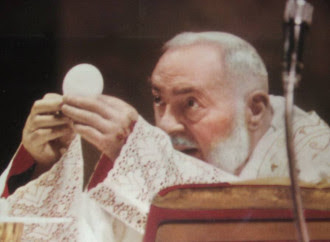 Another surprising account is that of Padre Raffaele of Sant’Elia a Pianisi, who lived in San Giovanni Rotondo for thirty-five years, occupying the cell next to the one that, for a certain time, belonged to Padre Pio, cell number five. The brother tells his story: “I got up to go down into church for the Midnight Mass of Christmas in 1924. The corridor was completely dark, broken only by the little flame of an oil lamp. In that dim light I saw that Padre Pio was also going down into church. He came out of his cell and proceeded with slow steps. I realized that he was wrapped in a halo of light. I looked closer and saw that he was holding the Baby Jesus in his arms. Stunned, I remained standing at the door of my cell. I knelt down. Padre Pio passed by me, completely radiant, not even noticing my presence.”

Thus, the humble hands of the Crucified Friar, mortally wounded, supported the Lord of Life, descended into the little tiny Baby, and they carried Him in procession for everyone to kiss and honor. In this incredible image the entire Mystery of Christ is condensed, and also the mission of this soul chosen by the love of God to benefit the entire world.

And since what revolves around the earthly and eternal life of this extraordinary lover of Christ does not require any further comment or clarification, we conclude this journey into the Holy Christmas of Padre Pio with a final story of his life, that of his dear friend and fellow brother, as well as the Vice-Postulator of his cause of canonization, Father Gerardo di Flumeri, who, after the last Christmas they spent together, wrote the following:

“I will always remember the Christmas of 1963, spent at the side of Padre Pio, my beloved and venerated spiritual father. The expression of expectation, which was present in his entire person, is impressed into my memory, just as there is indelibly in my mind his profound recollection and his ecstatic prayer. But above all what is still living before my eyes is the color of his rosy cheeks at the moment when the singing of the Te Deum announced to everyone the birth of the Savior. […] After the last reading, the little statue of the Baby Jesus was placed on the lectern and incensed. And then began, to the singing of the Te Deum, the long and mysterious procession. The friars singing with candles in their hands, the scrolls and the perfume of incense, the sacred vestments shimmering with gold, in the shadowed cloister….That procession seemed to me that it was the procession of all humanity, which forever goes forth to meet Christ who comes. And as we passed, I noticed that the eyes of all were turned to Him: to the Divine Child in the arms of the stigmatized father. […] But the seal on that unforgettable Christmas would be placed on it that evening. I went to the room of my beloved father, to wish him a Merry Christmas for the last time, and I felt myself mysteriously drawn towards him.  With his cheeks flushed as during the singing of the Te Deum during the night, and with his eyes spakling with joy and light, he recited to me in Latin the verse from the Gospel of Saint John: “Sic Deus dilexit mundum ut filium suum unigenitum” – “For God so loved the world that he gave his Only Begotten Son.” And this is the consoling certainty with which I live, ever since the holy night of that Christmas of grace.”

United to Saint Pio of Pietrelcina, we too ask for the grace to live in expectation of the coming of Our Savior, completely full and filled with The One who already is.