It’s a harsh letter signed by several professed knights of the Sovereign Military Order of Malta against attempts to impose a secularising reform of the order. The letter represents the latest episode of open war waged within the Order since 2017, when its Grand Master was forced to resign by Pope Francis. 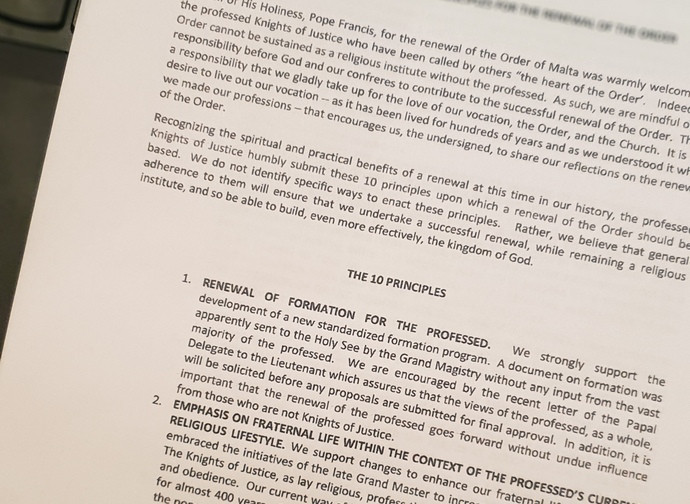 An air of rebellion now fills the Sovereign Military Order of Malta (SMOM), a lay religious Catholic order which has enjoyed very little peace since Pope Francis forcefully removed its Grand Master Fra’ Matthew Festing in January of 2017. While the election of a new Grand Master is still ongoing, there’s a project underway to reform SMOM Statutes which both dominates conversation about the Order and is provoking and major turmoil within it.

Recently, the Daily Compass has highlighted the key points of the draft reform whose main aim is to secularise the Order. Our news outlet has now obtained a letter of protest signed by roughly half of SMOM’s professed (those who take religious vows) knights. The letter was addressed to interim Lieutenant Fra' Ruy Gonçalo do Valle Peixoto de Villas Boas and SMOM’s Sovereign Council. According to some sources, the letter was also sent to a Vatican dicastery which has taken up the matter. (read letter here)

Added to the Order’s troubled internal affairs is the problem associated with Cardinal Angelo Becciu, who Pope Francis forced to step down last September 24 as Prefect of the Congregation for the Causes of Saints. Becciu, who had been appointed Papal Delegate for the Order, for all intents and purposes, had also become its Cardinal Patron, all but replacing Cardinal Raymond Burke, who was never formally dismissed, though effectively "sidelined" under Becciu’s leadership.

In the official communiqués regarding Cardinal Becciu’s now stripped positions of power, there is no mention of the Sovereign Order of Malta. However, it is a given, he can no longer have roles based on the trust granted to him by the Pope. In this moment of internal struggle, the position of intermediary between the Order and the Holy See, therefore, is also vacant.

The letter dated “September 2020” makes no explicit reference to the already drafted reform, but is clearly a reaction to it. The twenty-five signatories – all influential names within SMOM, including former Grand Master Festing  – present the “10 principles on which the Order of Malta’s reform should be based,” which the Knights of Justice "warmly welcome”, while underscoring that they are "the heart of the Order."

This is no random emphasis, because the letter’s main counterpoint is the attempt to secularise the Order, reducing it to little more than a NGO. This is the hope and ambition of the German wing of the Order, led by Baron Albrecht von Boeselager, its current Grand Chancellor (i.e. the Minister of Foreign and Internal Affairs) who has taken advantage of this transition to increase his power.

The letter’s lay religious signatories demanded the recognition of their centrality in decision-making, demanding that no reform measures be launched without their "final approval." Above all, they petitioned for the renewal of the professed members’ religious life to go “forward without any undue influence from those who are not Knights of Justice". In this regard, in sustaining the need for a renewal of religious life within the Order and without abandoning its original charism, the signatories ask to be able to discuss the individual aspects of the proposed reform concerning both fraternal life and the pathway to profession. This is one of several ways of stressing that others are deciding on these aspects.

Additionally, the signatories request that the current de facto block on acceptance of new vocations be lifted (at the moment there are 12 applicants for entry into the religious life of the Order) as well as on the profession of solemn vows for those who had already made simple vows. This temporary ban on vocations and final vows has been in place since the "revolution" of 2017, which no longer has any meaning other than to further weaken the role of the professed members within the Order of Malta.

Other points mentioned in the letter concern the role of professed knights within the Order’s national associations in addition to term limits for major offices. The letter strongly states that all "issued that affect the professed should be decided by the professed". Their demand is also in accordance with canon law.

In brief, the letter’s signatories want to halt whoever is playing with the future of the Sovereign Military Order of Malta by contradicting allegiance to the knights' original religious vocation, as expressed in the letter signed by former Papal Delegate, Cardinal Becciu, last July. The uncertainty about who will now oversee the reform process on behalf of the Pope only makes the clash within the Order all the more fierce. No doubt, the letter signed by the Order’s professed lay religious members will not be the final stand.