The Daily Compass watched the Netflix movie, “The Two Popes.” Read this and you won’t need to watch it: it is ideological, ridiculous and a cheap shot at painting Benedict XVI as a decrepit man and Pope Francis as the Church‘s Robin Hood. Just to give you an idea, there is a scene where Bella Ciao is sung - a Communist melody which has become associated with the Italian resistance against the Nazis. 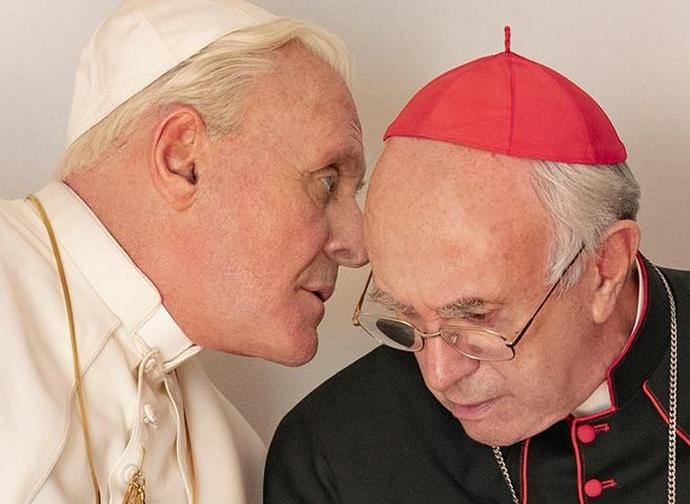 The opening credits begin and right away a voice is heard: “Francis, go and repair my church.” And at this point you could get up and leave, because it is already obvious where the movie is heading. The finale is in the same style: Bergoglio, as soon as he is elected Pope, refuses to wear the traditional purple cape, saying: “The carnival is over.” In reality, as we all know, it was at that point that the Pachamama carnival began. We are talking about the movie The Two Popes with Anthony Hopkins (Benedict XVI) and Jonathan Pryce (Francis), the latter closely resembles his character.

It is a Netflix film, which just in time for Christmas, has given us the homosexual Jesus of The First Temptation of Christ (complementing the “Last Temptation” of Martin Scorsese), aligning Netflix with all that is politically correct.
In order to spare you having to watch it, let’s just tell you right away that the film reveals all mysteries: Ratzinger resigned because he was inspired by God to leave his place to Bergoglio. Yes, the “Church of prohibitions” needs an upgrade and ought to begin by granting permissions, embracing liberalisation, and giving customs clearance to all sorts of change. Everyone has had enough. In fact, every time Cardinal Bergoglio mixes with people at a bar or in the street, he overhears comments that Benedict XVI is “a Nazi.” Then, curiously, during a face-to-face conversation he seems to admonish Ratzinger for have handled a pedophile clergyman the “old fashioned” way. A large part of the plot is a series of flashbacks which show a young Bergoglio who is too readily compliant with the anti-communist regime in Argentina.

It is done in good faith, but it gives an explanation for the mystery of why in seven years as pope, Francis has gone everywhere but has never returned to his homeland: he would not be welcomed by priests “of the liberation” or by the people who hoped for a future in Salvador Allende’s Chile. And further on there are mentions of the wall between the United States and Mexico (although not directly relevant, the urge to strike a blow against Trump was hard to resist). As soon as he is elected in the Sistine Chapel, Bergoglio is told not to forget the poor, another dig at the Church of Ratzinger, which, as everyone knows, never showed concern for the poor.

And then statistics are used to make a couple of sweeping statements: 20% of humanity exploits everyone else and even future generations: the famous “economy that kills.” Fortunately, Robin Hood has arrived. The conversation-confrontation between Benedict XVI and the cardinal who comes from the slums (according to the film) begins with Bergoglio requesting that Benedict resign. Why? Because he is useless, “the reforms” in the Church will never happen under him. And then: Ratzinger devoid of a sense of humour because he does not understand the jokes that Bergoglio tells him, Bergoglio whistling Dancing Queen  by Abba (a disco invitation directed at teenagers) and Ratzinger the reactionary asking him which hymn it is; the Argentinian loves soccer and the German only likes classical music; in short he embodies the pre-conciliar Church closed to the breath of the Spirit.

The film presents a cut-and-paste of slogans: bridges and not walls, welcoming, no to formalisms, the Eucharist as medicine for sinners and not a reward for the perfect, openness to the times that are changing. At a certain point, as if to make it official, a string quartet version of Bella Ciao is played (a Communist melody which has become associated with the Italian resistance against the Nazis). And then a happy ending: the two popes watch the Germany-Argentina soccer match on TV. The old church and the new are reconciled.

In the sense that the old Church has finally stepped aside and understood what true Christianity is.The performance of the two actors is truly superlative, but the only line which saves the whole film is this one: whoever marries an era will be a widow in the next one.