Only Benedict XVI defended the West

The violent Islamist attacks in France over the last few days and confirmed by the ones in Austria, constitute a broadside against the West. The Catholic Church, which doesn’t even name Islam or use Islamist, reveals its unwillingness to defend the West. Just the opposite of Benedict XVI’s pontificate. 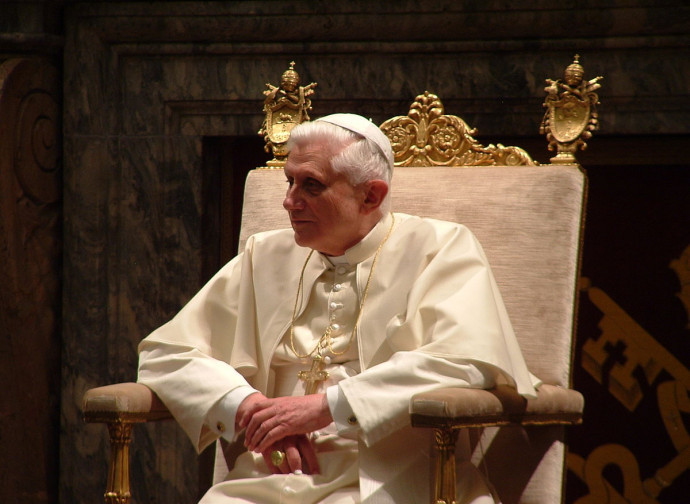 The frightening Islamist attacks in France over the last few days, and confirmed by the ones in Austria, constitute a broadside against the West, and the Catholic Church that downplays things or adopts a ‘let’s pretend’ stance, classifying events such as these under the generic category of terrorism with no adjective, shows it no longer wishes to defend the West and has lost any awareness of the close link it has with the West. We are living through dramatic times on this front. At this time the West is being attacked on all fronts, including, as always happens, the internal front of West against West, and if the Church abandons the West unto itself, that could well be the harbinger of its own end. Its in the sense of the West, or also in the sense of the Church?

Benedict XVI defended the West. He was not followed by the Church at large, quite the contrary. . .but he did defend the West. First of all, he defended it from itself, from the nothingness devouring it, from embarrassment over its past, from hatred of its own identity, from mistrust in western reason, from the swamp of relativism, and from the tendency  to sell itself off for peanuts. In Regensburg he had defended it on one hand from the internal Protestant driven secularization of its history, and, on the other hand, from Islam. As he said, both contradicted the relationship between faith and reason which is the most beautiful fruit of the western civilization if traced back to its own soul. He had defended it from relativism when explaining to the German Parliament what are the grounds of political authority, and calling on Europe to discover itself anew, something it is impossible to do if churches are closed, as Macron now wants to do and Conte  had already done. He defended it against sweeping immigration, sustaining the primary right people have not to emigrate, and from elitist ecologism by always speaking about human ecology and not just environmental ecology.

Benedict XVI hadn’t defended everything about the West, but he was sure about one thing: something providential and hence essential had happened in the West, and that  had been the encounter between Christianity and Greek metaphysics. Since this relationship had been severed precisely here in the West, its restoration has to take place in the West. What had happened was something that the Christian faith cannot do without, and no ‘African’ or ‘Asian’ Christianity will be able to become a surrogate it it were to disappear. Yes, Christianity is universal, but something indeed universal came about in the West. Defending the West does not mean defending a geo-political area, but rather a civilization, including some elements without which the Church cannot be what it is.

Giulio Meotti writes: “Ratzinger’s entire pontificate was a defense of the western civilization, or, in simpler terms, the West. But there is not a single challenge from which Ratzinger came forth as the apparent victor, as if nihilism was to be the sole destiny of the West, as if seduction was so far beyond any limits that annihilation alone could satisfy it”. This is why Mr. Meotti entitled his latest book on Benedict XVI,  The Last Pope of the West  (Liberilibri 2020). Historical  failures on their own,  however, never certify who was wrong. Therefore, the issue really becomes a big one: can a pontiff no longer defend the West? After Benedict XVI’s apparent defeat on the battleground, does the idea of defending the West have to be abandoned?  By no longer defending the West – in the sense clarified above – does the pontiff forego something essential for the Catholic faith and the Church?

Apart from some examples to the contrary, the Church today does not admit the West is under attack, and actually considers it a foe. The Church is very careful not to use the adjective Islamist or the noun Islamists when referring to acts of terrorism that cost so any innocent lives. In the American presidential elections, the Church is backing Biden, who can be considered the extreme advocate of the ideology of the death of the West by its own hand. The Church supports authoritarian regimes in South America, and carefully refrains from upsetting the Chinese giant over human rights, ecological disasters, and ‘might is right’ politics, The Church does not defend the West from the invasions of migrants, as it harbors sweet dreams of multi-religious crossbreeding.

The condemnation of the “culture of death” is both sporadic and very piecemeal, far from comparable with the condemnation of other phenomena morally less demanding. Many things can be said about the recent encyclical Fratelli tutti , but it is impossible to consider it a defense of the West.  It is much easier to see exactly the contrary in that encyclical letter.

On the issue of the defense of the West as such, the pontificate of Pope Francis is worlds apart from that of Benedict XVI. The latter, however, had very strong traditional foundations, and wasn’t a mere whim on the part of a renowned theologian. Therefore,  what’s going to happen with the Church’s continuity in this important arena? Giulio Meotti ends his analysis of the last Pope of the West with these words: “Time will tell us if Ratzinger was that clown nobody heeded when he ran around yelling, “fire, fire”, or, instead, he was a new Benedict able to save civilization from outright conflagration”.