Archbishop of Armagh and Primate of Ireland, he lived through the English persecutions in Ireland in the 17th century and was condemned in England to a death of horrific cruelty. Beatified by Benedict XV in 1920, he was later canonised by Paul VI in 1975, and is an example of fidelity to one's vocation and task.
- THE RECIPE: SEAFOOD CHOWDER 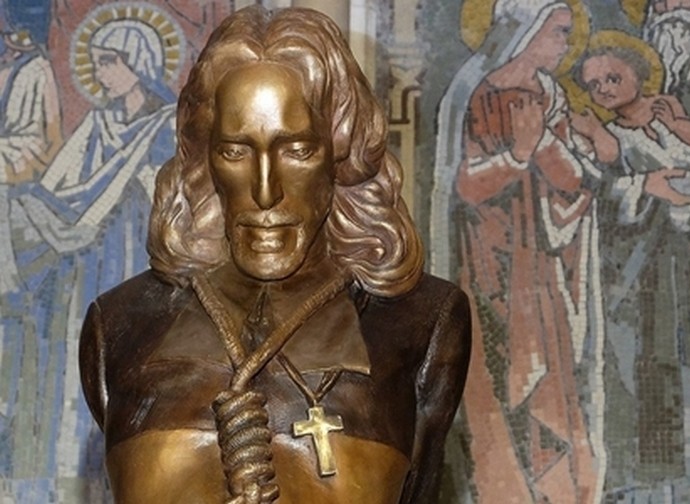 A cockroach scurries across the floor and stops abruptly by the table leg. It begins searching for something with its antennae touching the ground, in a rocking movement, as if it were probing the ground in search of something only it can see. The man with long grey hair watches it, sitting on the edge of the small bunk that serves as his bed in the cramped cell.

A deformed shoe crashes down on the insect, crushing it and startling the man. He looks up at his cellmate who, after having exterminated the intruder, goes back to sit on the other cot near the opposite wall. He is young, in his twenties, blond and good-looking but dressed in rags. He is a common criminal, caught stealing from a house that, unfortunately for him, belonged to a judge. He is waiting to be hanged, as he is also a repeat offender.

His cellmate, the grey-haired man, is the Archbishop of Armagh in Ireland, Oliver Plunkett. He too is facing death. But the charges against him are much more serious: Papist conspiracy against the king, with an array of witnesses.
The two have been sharing a cramped cell in Newgate Prison in London for a few days. But those few days were enough for Oliver to convince the thief John Smiley, a nonbeliever and unbaptised, of the existence of God and the need to be baptised. And he baptised him, with a little water taken from the jug given to them every day by the guards. John also took Communion from the bishop's hands - a simple piece of dried bread - part of their daily ration. But what does it matter? John saw his cellmate happy and that was enough to make him feel better himself. 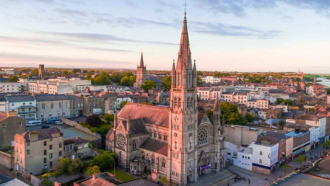 And how could Oliver Plunkett not be happy? Despite the desperate situation he was in, the fact that he had brought another soul to God filled him with an unspeakable happiness. The same happiness he had felt years before - it seemed like an eternity - when he had first met the Italian priest, Jesuit Father Pier Francesco Scarampi, sent by the Pope as a representative to the Kilkenny Confederation (Ireland's self-governing parliament), having been appointed Apostolic Nuncio to Ireland a few months earlier. It was then that Oliver realised that the path he wanted to follow was that of the priesthood. Despite the thirty-year age difference, he and Scarampi bonded immediately: they shared a taste for the austere and penitential life and their main vision was the common idea of defending Catholics.

When Scarampi was called back to the Eternal City in 1647 he decided to take Oliver Plunkett with him and was enthusiastic about his decision. In Rome Oliver put his unusual intelligence to good use, studying with profit at the Irish College. He was ordained a priest in 1654, in the chapel of the Pontifical Urban College of Propaganda Fide.  He received ordination from the hands of an Irish bishop who had fled to Rome because of Oliver Cromwell's fiercely anti-Catholic policies, which began in 1649. Catholic priests, caught administering the sacraments in Ireland, were hanged or deported to the West Indies.

Because of the rampant religious persecution, Plankett was unable to return to his homeland immediately, so he exercised his priestly ministry for some years in Rome, among the chaplains of the Oratory House of St Jerome of Charity, and devoted himself to the spiritual care of the sick.
In the meantime he graduated in Law at the Sapienza University. In 1657 he was appointed Professor of Theology at the Urban College, where he taught young future missionaries until 1669; he was also Counsellor for Irish Affairs at the Sacred Congregation of Propaganda Fide.
He seemed destined for a peaceful and quiet life in Rome, almost resigned to never returning to Ireland. But fate had other plans for him.

With the death of Oliver Cromwell and the reign of Charles II, the anti-Catholic policy of the English in Ireland was relaxed and, in 1670, Plunkett, after a brief clandestine stay in London, was able to return to his homeland as Archbishop of Armagh and Primate of Ireland, with the task of reorganising the archdiocese and the Irish Church. The appointment of archbishop was made by motu proprio on 21 January 1669 by Clement IX (1600-1669), the result of a personal initiative of the Pope. The Pontiff was aware of Plunkett's desire to return to his country to serve the souls of those distant lands. His appointment as archbishop also entailed the title of Primate of all Ireland.

When he arrived home, he set to work and his first act was to establish the Society of Jesus in Drogheda, where he founded a school for boys and a college for theological students.
He extended his ministry to the Gaelic-speaking Catholics of the Highlands and Islands of Scotland. He was very active in the fight against alcoholism among priests. In 1670 he organised an episcopal conference of the Irish Catholic Church in Dublin, but had disagreements with the archbishop of that city, Peter Talbot, about primacy in Ireland. This was compounded by disagreements with the Franciscan order over an estate in which he sided with the Dominicans.

In 1673 the English resumed their anti-Catholic persecution. The Jesuit college in Drogheda was razed to the ground and a series of edicts made the situation even more explosive. The Archbishop of Armagh was ordered to leave the country, but Plunkett ignored the order and, once again in hiding, travelled the country dressed as a layman, suffering cold and hunger. He remained in hiding until 1679.
Hunted down everywhere, Plunkett stubbornly managed to evade capture, but one imprudent action cost him dearly. He went to visit a relative who was dying and his fate was sealed. He was recognised and arrested.

In 1679 he was tried in Dundalk and imprisoned in Dublin. The following year he was taken to London for a retrial for high treason even though the English courts had no jurisdiction over those accused of crimes committed in Ireland. Most of the prosecution witnesses were common criminals. Added to this was the testimony of two Franciscan perjurers, which was instrumental in guiding the court's judgement.
Oliver Plunkett was found guilty of high treason for “plotting the death of the king, plotting to provoke war in Ireland, altering the religion there, and bringing a foreign power into the country”. He was sentenced to death.

The execution of Oliver Plunkett in Tyburn, England, was of horrific cruelty: but that was the law. That kind of execution was the rule. With very few exceptions, such as high-ranking officials (Thomas More, John Fisher, Margaret Pole) who were beheaded or killed quickly, all others were subjected to unspeakable suffering before death, with gruelling interrogations, harsh imprisonment and refined torture. When they were put to death, they were all hanged, but moments before suffocation they were released from the noose and, while still semi-conscious, were disembowelled.
After that, with a cruelty that surpassed all human limits, their bodies were ripped open and their poor remains covered in tar and hung from doorways and in the main areas of the city.
This type of execution was also applied to Oliver Plunkett: he was hanged, disembowelled and quartered. It was on 1 July, according to the old calendar, i.e. 11 July in the year 1681; according to the various calendars it is celebrated on 11 or 12 July, but it appears on 1 July in the Roman Martyrology. 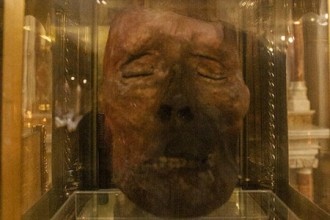 He was the last of the Catholic martyrs killed in England. His body was initially buried in the courtyard of St Giles in the Fields, in two small containers, next to the bodies of five other Jesuits killed earlier. His mummified head (pictured) is in Drogheda, kept in a casket in the left transept of St Peter's Catholic Church; most of his remains now rest in Downside Abbey, England, after being exhumed and stored for 200 years in the Benedictine monastery of Lambspringe, near Hildesheim, Germany.
A few days after Oliver Plunkett's execution, the ‘Popish Plot’ was proved to be a sham organised by Lord Shaftesbury, who was imprisoned in the Tower of London.

Oliver Plunkett was beatified in 1920 by Pope Benedict XV and canonised in 1975 by Pope Paul VI (the first Irish saint in almost 700 years). The Catholic Church remembers him on 1 July. He was appointed patron of the peace and reconciliation process in Ireland.

With the restoration of the Catholic hierarchy in England and Wales, it was only in 1850 that the possibility of a beatification of the martyrs was raised, at least of those whose martyrdom was proven, despite the centuries that had passed. In 1874, the Archbishop of Westminster sent to Rome a list of 360 names with the proof of martyrdom for each one of them. From 1886 the martyrs, in more or less numerous groups, were beatified by the Supreme Pontiffs. About forty of them have also been canonised.

Many reflections can be made on the life and death of Oliver Plunkett: we can recall his incredible energy, his erudition, his acute intelligence and his exemplary courage. He knew how to reconcile the duties of a pastor and those of an administrator, with regular and careful reports written to Rome.
We recall here the words of the Postulator of the Cause, John Hanly, who wrote about him in L'Osservatore Romano of 12 October 1975:

“The Church, today as always, needs the example of her holy members. And she also needs their intercession with the throne of mercy. The example of Oliver Plunkett can today inspire the faithful who live in countries where the Catholic faith is in various ways hindered, if not openly ostracised. As Archbishop of Armagh, he was a poor man, but he nurtured a high level of clerical decorum for the priests of his province, which is no small example for the Church today. Had these standards been worldly, the first breath of persecution would have found him a fugitive, rather than in the guise of the good shepherd ready to suffer while remaining faithful to his flock. Today's world, in which vocation and fidelity to one's task have so little meaning, needs his example”.