The biennial contemporary sacred art exhibition titled ‘Ode to Life,’ is currently being held at the Grand Hôtel des Ambassadeurs in Menton, on the French Riviera. It is the first of its kind and well worth a detour. Curated by Liana Marabini, it runs to the end of October. 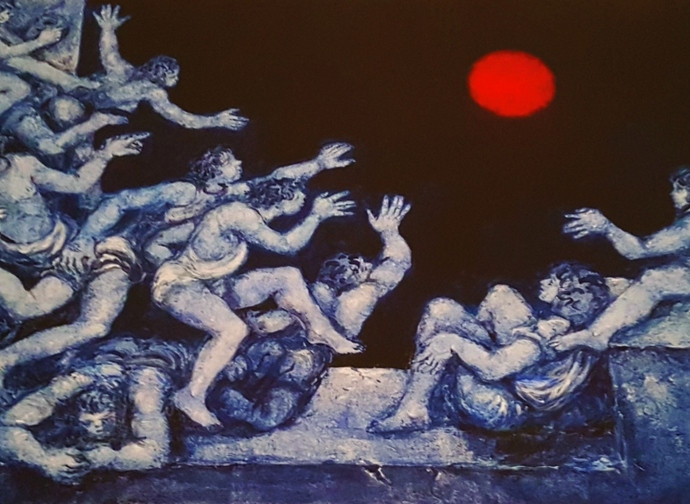 The biennial contemporary sacred art exhibition titled ‘Ode to Life,’ is currently being held at the Grand Hôtel des Ambassadeurs in Menton, on the French Riviera. It is the first of its kind and well worth a detour. Curated by Liana Marabini, it runs to the end of October.

The hotel built in 1865, is the backdrop, the forth floor, is the recommended place to begin viewing the exhibition that counts almost two hundred pieces of art. Our room 409, happens to be at the end of the corridor and at the start of the colourful Salvador Dali collection which invigorates the intermittent wall space. Descending the stairs, we encounter locals with shopping bags and tourists with backpacks and sturdy footwear, who either for the love of art or for curiosity, wander casually through the floors and halls. We join their silence, fixed gazes in contemplation, we all move from work to work. The exhibition combines beauty with sacred in an unpredictable encounter with the visual arts, instigating a perception of otherness, inviting a transcendental experience with Mystery. 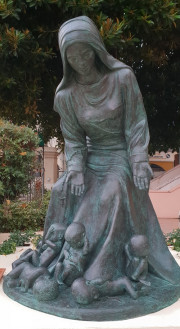 Perhaps it’s the controversial Vierge aux Innocents by Daphné du Barry - a monumental bronze statue in front of the hotel of a tearful Virgin Mary bending open-armed towards seven unborn babies nestled at her feet - which captures the attention of passersby and compels them to climb the rose lined steps to the exhibition. Liana owner of the hotel and curator of the exhibition, speaks of “extraordinary events,” since its inauguration at the beginning of October.

Liana Marabini, a name worth noting, is an extraordinary woman. Long-standing and esteemed Italian patroness of the arts for the Vatican Museums representing Monte Carlo and the South of France, President of  the International Festival of Catholic Films, she has written, directed and produced a number of successful Catholic films as well as numerous important cultural events. The biennial arts exhibition created to celebrate the tenth anniversary of her film festival to be held this November in Rome, is in effect an instrument of evangelisation. Her missionary zeal, confirmed by many who have found or returned to the faith after an encounter with Liana, is her driving force. The Catholic chapel on the first floor, where Christ present in the holy tabernacle can be adored, is part of the exhibition.

‘An ode to life’ Liana explains because, “life that precious gift has lost its value.” Prints, paintings, sculptures and photographs by renowned contemporary artists, invite the viewer to pause and look a little closer and beyond the initial impact of shape, form and colour. Art works that open a conversation between the artist and the viewer; a sort of ideological challenge from heart to heart and soul to soul, reverts back to those timeless questions: Where do we come from? Where are we going? What is the meaning of existence? 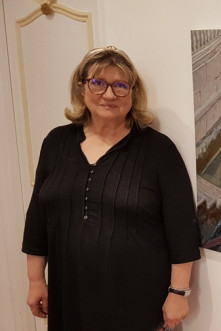 Sat comfortably in the hotel lounge, between sculptures of a life-size mantra ray and cat-headed geisha, Liana chats to the Bussola about the exhibition. She begins with the motivation for the exhibition theme. “We live in a moment of paradox. On one hand, we live longer and healthier than in the past, with more rights and freedoms and democracy than ever before, at a moment when Civilisation has reached its highest point ever in history. And yet, there is a tendency now to want to be God, to be self-determined and when this happens, mankind creates only destruction. ‘An ode to life,’ provides a moment of reflection, so we can take charge of who we are and make some space for the transcendental.”

But if the objective is transcendental, we wonder why not more of the artworks are of religious subjects. Liana immediately draws attention to the difference between sacred art and religious handicraft. “ Holiness is not defined by the subject as much as by what the artwork conveys: feelings, values, openness to Mystery. It is the art that inspires reflection and elevates the soul. The selection of artists and works from across the globe required laborious attention to this aspect. In many of the selected works, we perceive the artist’s inner turmoil or even experience the conversion which some of the artists are going through. For example, the painting of  Saint Michael in battle against the dragon at the entrance of the hotel is by Hugo Bogo and he will be baptised next April. He encountered the faith through painting. Or Damian Hurst, a British artist, who converted after seeing the scan of his first son. He transformed the miracle of life in to art. He produced the “Miraculous Journey” for the wife of the Emir of Qatar for the hospital Sidra al Rayyan. Fourteen enormous sculptures of foetuses in each stage of development concludes with a 14 meter newborn baby. I have witnessed so many conversions brought about by art. Even very painful experiences which are part of life, when given expression in art can indicate that Mystery we all long for.”

We conclude by asking Liana about her work as patroness of the arts and with the Vatican Museums. “The role of sponsor and patroness are often confused. A patron gives without expecting anything in return which in the end repeats what the Church has always done throughout history.  And this not only refers to art but includes every time we help anyone without expecting anything back. We need to remember when we say money is the root of all evil that even if it can be used to corrupt and destroy, it can also serve to do so much good if used correctly. I began working with the Vatican 36 years ago by helping with projects to preserve and conserve the Pope’s collections. The Vatican museums contain incomparable treasures which is an unequivocal example of the Church’s greatness."