"No honest person can anymore deny the almost general doctrinal confusion which is reigning in the life of the Church in our days." "In view of this reality, our conscience does not allow us to be silent" 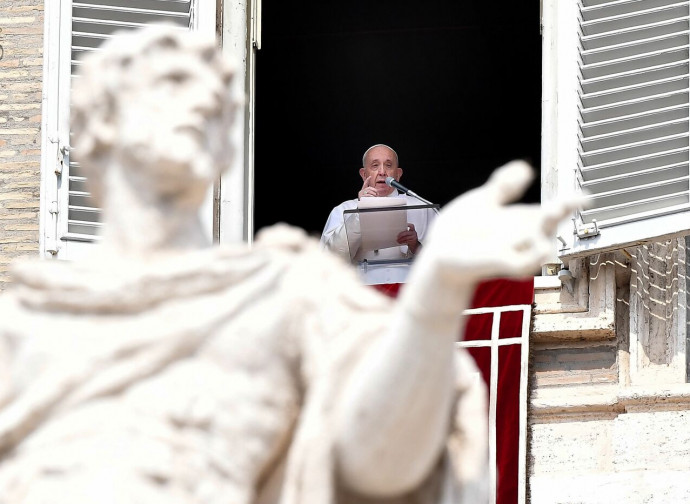 No honest person can anymore deny the almost general doctrinal confusion which is reigning in the life of the Church in our days. This is particularly due to ambiguities regarding the indissolubility of marriage, which is being relativized through the practice of the admittance of persons cohabitating in irregular unions to Holy Communion, due to the increasing approval of homosexual acts, which are intrinsically contrary to nature and contrary to the revealed will of God, due to errors regarding the uniqueness of the Our Lord Jesus Christ and His redemptive work, which is being relativized through erroneous affirmations on the diversity of religions, and especially due to the recognition of diverse forms of paganism and their ritual practices through the Instrumentum Laboris for the coming Special Assembly of the Synod of Bishops for the Pan-Amazon.

In view of this reality, our conscience does not allow us to be silent. We, as brothers in the College of Bishops, speak with respect and love, so that the Holy Father may unequivocally reject the evident doctrinal errors of the Instrumentum Laboris for the coming Special Assembly of the Synod of Bishops for the Pan-Amazon and not consent to the practical abolition of priestly celibacy in the Latin Church through the approval of the ordination of so-called “viri probati”.

With our intervention, we, as shepherds of the flock, express our great love for souls, for the person of Pope Francis himself and for the divine gift of the Petrine Office. If we would not do this, we would commit a great sin of omission and of selfishness. For if we were silent, we would have a quieter life, and perhaps we would even receive honors and acknowledgments. However, if we would be silent, we would violate our conscience. In this context we think of the well-known words of the future Saint Cardinal John Henry Newman (who will be canonized on October 13, 2019): “I shall drink — to the Pope, if you please, — still, to Conscience first, and to the Pope afterwards” (A Letter Addressed to the Duke of Norfolk on Occasion of Mr. Gladstone’s Recent Expostulation). We think of these memorable and germane words of Melchior Cano, one of the most learned bishops during the Council of Trent: "Peter does not need our adulation. Those who blindly and indiscriminately defend every decision of the Supreme Pontiff are those who most undermine the authority of the Holy See: they destroy, instead of strengthening its foundations”.

In recent times, there has been created an atmosphere of an almost total infallibilization of the statements of the Roman Pontiff, that is to say, of every word of the Pope, of every pronouncement, and of merely pastoral documents of the Holy See. There is, in practice, no more the observance of the traditional rule of distinguishing the different levels of the pronouncements of the Pope and of his offices with their theological notes and with the corresponding obligation of adherence on the part of the faithful.

In spite of the fact that dialogue and theological debates were encouraged and promoted in the life of the Church during the past decades after the Second Vatican Council, in our days, there seems to be no more possibility of an honest intellectual and theological debate and of the expression of doubts regarding affirmations and practices which seriously obfuscate and harm the integrity of the Deposit of the Faith and of the Apostolic Tradition. Such a situation leads to the disregard for reason and, therefore, for the truth.

Those who criticize our expressions of concern employ substantially only sentimental arguments or arguments from power. They seemingly do not want to engage in a serious theological discussion of the subject. In this respect, it seems that oftentimes reason is simply ignored and reasoning suppressed.

A sincere and respectful expression of concern regarding matters of great theological and pastoral importance in the life of the Church today, addressed also to the Supreme Pontiff, is immediately squelched and cast in a negative light with defamatory reproaches of "sowing doubts", of being "against the Pope", or even of being “schismatic”.

The Word of God teaches us, through the Apostles, to be certain, firm, and uncompromising regarding the universal and unchanging truths of our Faith and to keep and protect the Faith in the face of errors, as St. Peter, the first Pope, wrote: “Take heed, lest being led aside by the error of the iniquitous, you fall from your own steadfastness” (2 Pt. 3:17). St. Paul also wrote: “We may no longer be children, tossed to and fro by the waves and carried about by every wind of doctrine, by human cunning, by craftiness in deceitful schemes. Rather, speaking the truth in love, we are to grow up in every way into him who is the head, into Christ” (Eph. 4:14-15).

One must keep in mind the fact that the Apostle Paul publicly reproached the first Pope at Antioch in a matter of a lesser gravity, compared to the errors which in our days are spread in the life of the Church. St. Paul publicly admonished the first Pope because of his hypocritical behavior and of the consequent danger of questioning the truth that says that the prescriptions of the Mosaic law are no longer binding for Christians. How would the Apostle Paul react today, if he would read the sentence of the Abu Dhabi document which says that God wants in his wisdom equally the diversity of sexes, nations and religions (among which there are religions which practice idolatry and blaspheme Jesus Christ)! Such an affirmation effects, indeed, a relativization of the uniqueness of Jesus Christ and of his redemptive work! What would St. Paul, St. Athanasius and the other great figures of Christianity say, when reading such a phrase and the errors expressed in the Instrumentum Laboris for the coming Special Assembly of the Synod of Bishops for the Pan-Amazon? It is impossible to think that these figures would remain silent, or would let themselves be intimidated with reproaches and accusations of speaking "against the Pope".

When Pope Honorius I in the seventh century showed an ambiguous and dangerous attitude regarding the spread of the heresy of monothelitism, which denied that Christ had a human will, St. Sophronius, Patriarch of Jerusalem, sent a bishop from Palestine to Rome, asking him to speak, pray and not remain silent until the Pope condemned heresy. If St. Sophronius lived today, he certainly would be accused of speaking "against the Pope".

The affirmation on the diversity of religions in the Abu Dhabi document and especially the errors in the Instrumentum Laboris for the coming Special Assembly of the Synod of Bishops for the Pan-Amazon contribute to a betrayal of the incomparable uniqueness of the Person of Jesus Christ and of the integrity of the Catholic Faith. And this occurs before the eyes of the whole Church and of the world. A similar situation existed in the fourth century, when with the silence of almost the entire episcopate, the consubstantiality of the Son of God was betrayed in favor of ambiguous doctrinal affirmations of semi-Arianism, a betrayal in which even Pope Liberius participated for a short time. St. Athanasius never tired of publicly denouncing such ambiguity. Pope Liberius excommunicated him in the year 357 "pro bono pacis", i.e. “for the sake of peace”, to have peace with Emperor Constantius and the semi-Arian bishops of the East. St. Hilary of Poitiers reported this fact and rebuked Pope Liberius for his ambiguous attitude. It is significant that Pope Liberius, unlike all his predecessors, was the first pope whose name was not included in the Roman Martyrology.

Our public statement corresponds with the following words of Our Holy Father Pope Francis: “One general and basic condition is this: speaking honestly. Let no one say: ‘I cannot say this, they will think this or this of me...’. It is necessary to say with parrhesia all that one feels. … A Cardinal wrote to me, saying: what a shame that several Cardinals did not have the courage to say certain things out of respect for the Pope, perhaps believing that the Pope might think something else. This is not good, this is not synodality, because it is necessary to say all that, in the Lord, one feels the need to say: without polite deference, without hesitation.” (Greeting to the Synod Fathers during the First General Congregation of the Third Extraordinary General Assembly of the Synod of Bishops, October 6, 2014).

We affirm in the presence of God who will judge us: we are true friends of Pope Francis. We have a supernatural esteem of his person and of the supreme pastoral office of the Successor of Peter. We pray very much for Pope Francis and encourage the faithful to do the same. With the grace of God, we are ready to give our lives for the truth of the Catholic faith about the Primacy of Saint Peter and his successors, should persecutors of the Church ask us to deny this truth. We look to the great examples of fidelity to the Catholic truth of Petrine Primacy, such as it St. John Fisher, a bishop and cardinal of the Church, and St. Thomas More, a layman, and many other Saints and Confessors, and we invoke their intercession.

The more lay faithful, priests and bishops hold to and defend the integrity of the deposit of faith, the more they, in fact, support the Pope in his Petrine ministry. For the Pope is the first in the Church to whom applies this admonition of the Holy Scripture: “Hold the form of the sound words that you have heard from me, in the faith and love that are in Christ Jesus. By the Holy Spirit who dwells in us, guard the good deposit entrusted to you” (2 Tim. 1:13-14).

Feast of Our Lady of Ransom